Will this rope break due to the tidal forces or not?

While I was thinking about how tidal forces can make objects float at the surface of a planet orbiting a massive object like a black hole, the fact that any material on the Earth isn't held together by gravity only, but also by chemical bonds which give it its tensile strength came into my mind.

The scenario I thought of is as following:

1- A 10 kg metal sphere is tied to a 1 meter long thin rope and this rope is nailed into the surface of the Earth.

3- The Earth is orbiting a black hole at its Roche radius, and so our metal sphere on the surface of the Earth is effectively weightless and floating, but it is still held by the rope.

Here is a simple picture to summarize: 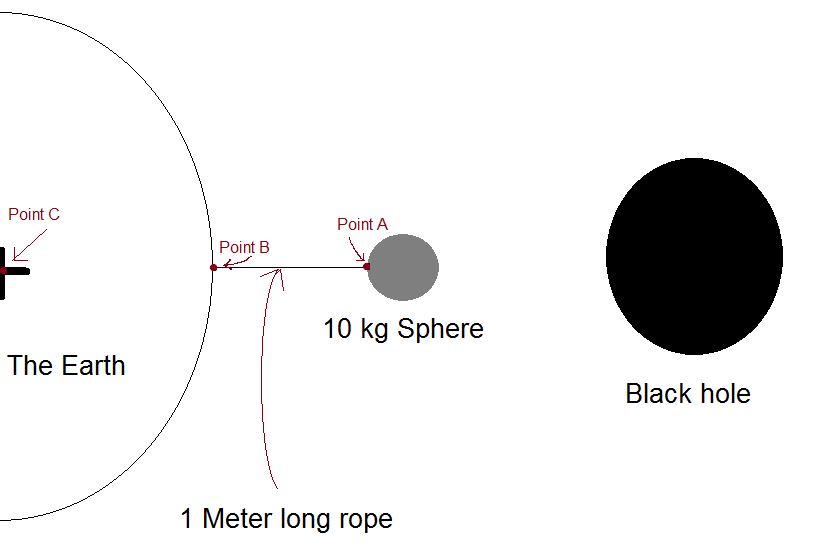 Now, if we move the Earth to orbit the black hole even closer until the tidal forces on Earth due to the black hole become $\Delta a$ = 10.8 $m/s^2$ and so the metal sphere is pulled by the difference between $\Delta a$ and the Earth's gravitational acceleration (9.8 $m/s^2$) which is 1 $m/s^2$ towards the BH, will the rope break or not ?

In other words, if a is the gravitational acceleration towards the BH, in order to break the rope, which one do we need ? :

Between points A and C. The effect of having the Earth there is that it is providing a link between the center of mass of the Earth (C) and the test sphere (A). Effectively, there is an infinitely strong, rigid rod going from B to C, which is then connected to the rope. The tensions in that rod (the Earth) must match that of the rope.

Another way to think about it, is that if you removed the Earth entirely from the problem, and wanted to see if the rope was strong enough to resist the tidal forces --- then you would consider the difference in acceleration between points A and B.

Not the answer you're looking for? Browse other questions tagged homework-and-exercises forces newtonian-gravity estimation tidal-effect or ask your own question.

0
Why aren't Roche limit and the difference in gravitational acceleration the same?

4
Curvature of spacetime in only required to explain tidal forces?
6
Tidal force when planets and smaller objects collide
4
Would a considerably big asteroid be disintegrated by the Earth's Roche limit?
0
Why aren't Roche limit and the difference in gravitational acceleration the same?
3
If Saturn's rings cannot coalesce into a moon because of tidal forces, then how are shepherd moons able to exist?
0
Why do tidal forces exist in black holes?
2
How are relativistic tidal forces different from their Newtonian counterparts?