I'm trying to calculate the interference of two non-entangled photons, like in a double-slit experiment with two photon sources, one behind each slit (follow-up on this question).

The individual particles have the wave function $\psi_i\in\mathcal{H}_i$ where $i\in\{1,2\}$. The tensor product of their wave function is

This is what I tried:

Is that correct so far? How to continue to show the interference?

Photons are quantum mechanical entities. This means that their interactions can be described by Feynman diagrams, which are reinterpreted as creation and annihilation operators operating on ground states with propagators in between.

It has little meaning to talk of two individual photons "interfeering" without writing down the Feynman diagrams. Photon photon interactions are four vertex at lowest order. This means a factor of ~10^-8, as the electromagnetic coupling constant is of order 10^-2. 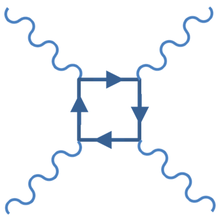 A Feynman diagram (box diagram) for photon–photon scattering, one photon scatters from the transient vacuum charge fluctuations of the other

The four propagators for energies below gamma energies are highly off mass shell and thus diminish the probabilities even further.

So it is very improbable that two photons will have a measurable interference.

I'm trying to calculate the interference of two non-entangled photons,

That's like saying you are trying to compute the wave function of a unicorn.

Now why did I object so early? Because a general state of the multiple system is not of the form $\psi_1\otimes \psi_2$ with $\psi_i\in\mathcal{H}_i$ even when they are distinct. A state like $\psi_1\otimes \psi_2$ is a special multiparticle state, one where there is a single particle state for each particle (namely $\psi_1$ and $\psi_2$). And in general this doesn't happen. In general these states are like the x axis and y axis in $\mathbb R^2$ they are possible, but not general. The general states are linear combinations of these basis states and hardly ever are these states.

The tensor product of their wave function is

Which is another problem, you said you wanted a non entangled state. But that means you want a factorizable state. And in general that isn't possible. Sure you could have bosons in a state that is identical i.e. if $\psi_1=\psi_2$ then $\psi_1\otimes\psi_2$ is possible but in general only states like $c\psi_1\otimes\psi_2+c\psi_2\otimes\psi_1$ Are possible which means you have to learn to distinguish between states on the left of the tensor symbol and states on the right rather than letting the numbers do the distinguishing for you. I mean you could let $a=\psi_1$ and let $b=\psi_2$ and then talk about a state like $a\otimes b +b\otimes a $ but guess what? That state is entangled. Entanglement isn't just common, like being not on the x axis or the y axis is common entanglement is almost required.

And when it isn't required the states are the same, so it is hard to have a state aimed at just one slit and then not be entangled.

Hence you are asking for the wave function of a unicorn. Except evolution could have produced a unicorn and scientists could try to someday make one. Whereas these symmetry rules come from the statistics required to observationally get the thermodynamics we observe. So there are really good reasons to think that it is literally impossible to have what you want.

But what if it were? Then, if you compute $|\psi_1(x_1,y_1,z_1)\otimes\psi_2(x_2,y_2,z_2)|^2$ you get $|\psi_1(x_1,y_1,z_1)|^2|\psi_2(x_2,y_2,z_2)|^2$. And check my work questions are off topic which is why I spent so much time addressing more fundamental conceptual errors. And I can't answer your question about how to proceed towards showing interference for non entangled photons where each one is heading towards just one slit since that doesn't sound physically possible to have such a thing even before it went through the slits.

Not the answer you're looking for? Browse other questions tagged quantum-mechanics tensor-calculus or ask your own question.

9
Existence of adjoint of an antilinear operator, time reversal
1
How to compute observables from the boson field operator?
1
Derivation of $E=h\nu$?
2
Quantum Mechanics: Can the probability of finding a particle in the whole space be smaller or higher at certain times?
3
On Griffith Quantum example 2.1: normalization of wave function in time.
0
Interaction of two-level system with radiation
0
Is it possible for the measurement to yield a superposition of states in the original space?
0
Can there be an interference term in a two-state quantum system?
1
Mean value of projection operator