I have learned that the wave function cannot be visualized as a real physical wave like for example the EM field, because for multi-particle systems, it is not a wave in $\mathbb{R}^3$ but in $\mathbb{R}^{3N}$. See this question if I haven't expressed myself clearly.

I'm wondering how that fits into the following modified double-slit experiment: 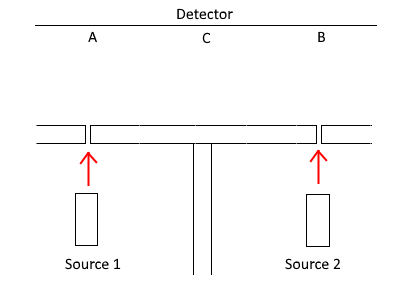 Imagine two light sources emitting photons that are as coherent and equal as possible (same frequency, same polarization, etc). Each light source is placed before one of the slits, and there is a wall between the light sources, so if hole 1 is closed, only photons from source 2 can pass to the detector.

Let's define $\mathcal{H}_1$ as the Hilbert space of the quantum system where source 2 is off and only source 1 emits photons: 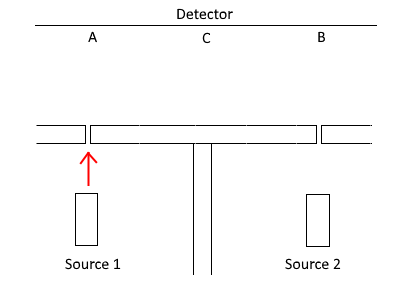 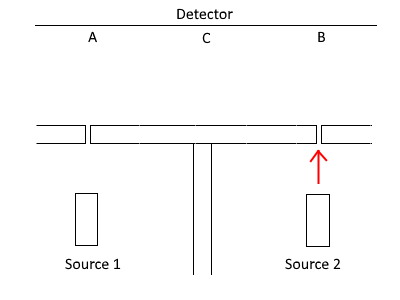 In both systems, there is no interference pattern on the screen. In $\mathcal{H}_1$, we detect most of photons around the position A on the detector, and in $\mathcal{H}_2$ most of the photons land at position B.

Is that correct so far?

Now, as far as I know, in $\mathcal{H}_c$ there should be an interference pattern of photons at the position C of the detector. The photons from source 1 interfere with those from source 2.

How can this interference be explained with respect to the tensor product? The wave functions of the photons from source 1 do not "live in" the same $\mathbb{R}^3$ as those from source 2, so how can they interfere?

EDIT: Continuation moved to other question.

This answers the title

Photons have extremely weak interactions between them. Photon photon interactions are box diagrams and the probability of a photon interacting with another photon is minuscule. . The classical interference pattern in the Young experiment showed the wave nature of light within classical electrodynamics. The observed single photon at a time interference demonstrates the quantum mechanical nature of photons. Classical light beams are emergent from an under-layer of innumerable photons.

Though a tensor product of individual wave functions may be written down , it has no interference type information (phases) unless the wavefunctions come from the solution of the quantum mechanical equations with the same boundary conditions, i.e. are entangled. This can only happen in dimensions commensurate to h_bar, quantum mechanical dimensions, not the macroscopic dimensions shown in the figure.

In addition , the velocity of light is enormous, there is no way that two independent light sources can be made synchronous in releasing individual photons.

But you could always ask the corresponding question about electron beams and ignore the creation process.

Which means there are two totally different senses of labelling the electrons. One corresponds to whether you are referring to $(x_1,y_1,z_1)$ or $(x,2,y_2,z_2)$ (which is the sense everyone else uses) and another is which slit is goes through (the sense you are using) so you have to watch out for that.

But that's the usual single particle case. There is a wave at both slits and a single particle going through. All that has happened now is you have been honest about the effects on and of the other particles that haven't gone through yet.

Apparently, I got this wrong from the beginning. Two photons from different sources can interfere (if the experiment is set up appropriately, but it's very hard to set that up).

However, they don't interfere at the quantum mechanical wave function level, but at the level of the electromagnetic field.

According to @ACuriousMind (who explained this to me) this could be solved in quantum optics, and most likely in QED too.

Not the answer you're looking for? Browse other questions tagged quantum-mechanics double-slit-experiment tensor-calculus or ask your own question.

18
“Reality” of EM waves vs. wavefunction of individual photons - why not treat the wave function as equally “Real”?
1
Interference of two non-entangled photons, calculation using tensor product of Hilbert spaces