Is it much? Well, If you wan’t to store this energy with the mass of atmosphere; m-atm = 5.15 x 1018 kg, you need to have the whole Atmosphere to first move with a velocity of 8.2 m/s or 30 km/h and then bring it to the full stop to make this difference.

Question; How is physically possible that such a amount of some energy is stored in Earth for such a long time, and could still be retrieved back to a rotational Kinetic energy still having even the correct (same) direction of rotation? 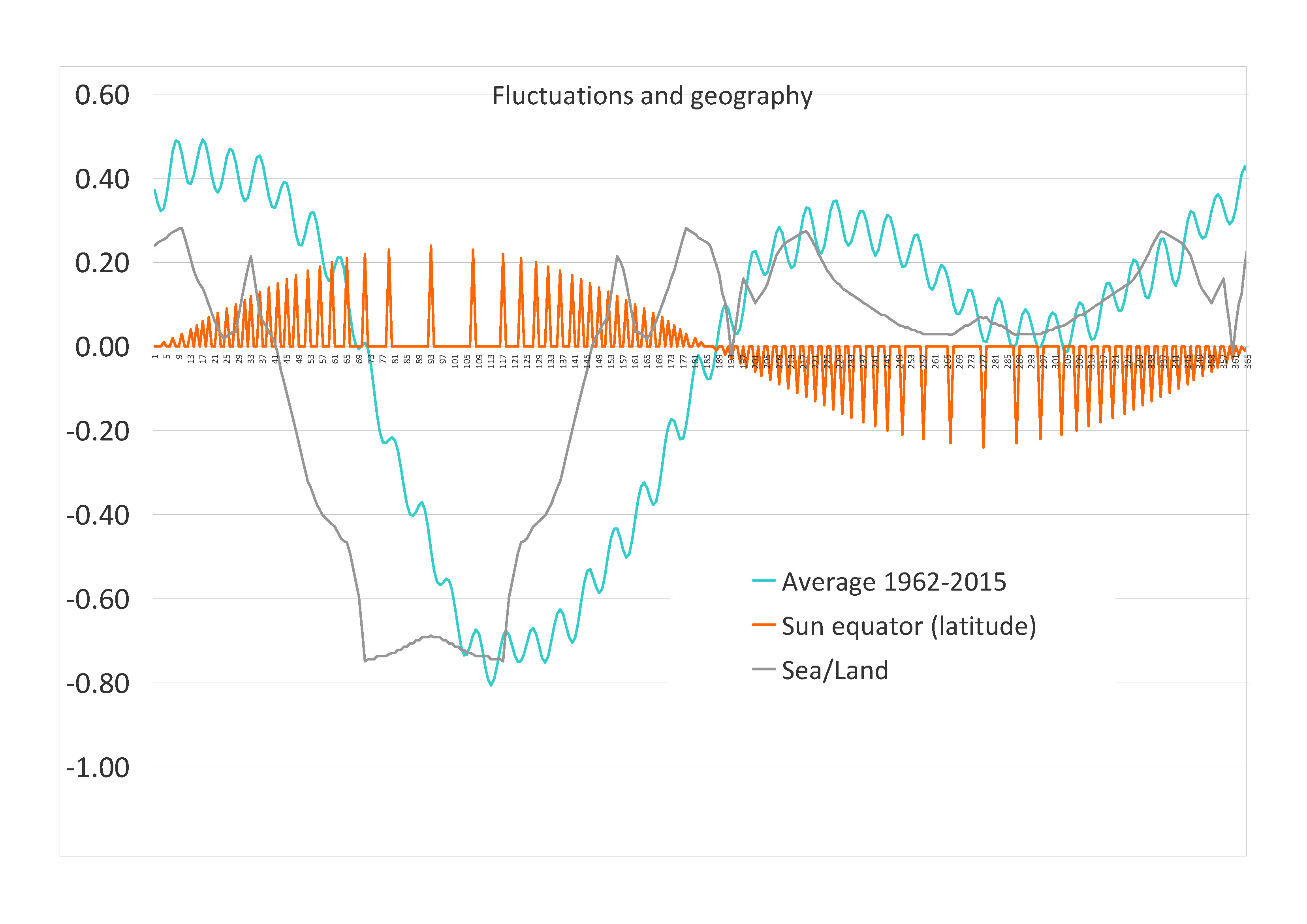 Which proves that the variation seem to have a certain system. Note that this is not calendar Year, it starts on Equinox; 20/21 March. The main thing to see is the +0.45...-0.75 typical annual fluctuation.

My Answer is; "No Way", And that Earth rotates because of sun.

What does this small change means in form of Rotational Kinetic Energy?

There's a problem with your calculation: You assumed a constant value for the Earth's moment of inertia. The Moon and Sun raise tides on the Earth itself. These Earth tides result in subtle changes in the Earth's moment of inertia. The signature of these tides can easily be seen in the excess length of data for 1998, with the horizontal axis being $(\text{MJD}-50814)/27.32166156-0.15$, where MJD is the modified Julian day number of the day in question. About those numbers: 50814 is the Julian date for 1 January 1998, 27.32166156 is the number of days in a sidereal month, and 0.15 nicely makes the peaks hit the grid lines. 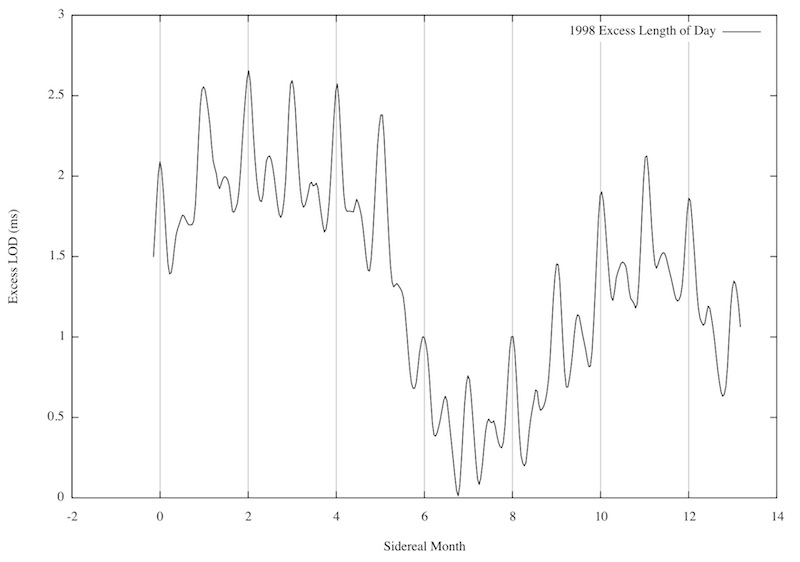 The annual and quasi-biennial happened to be in phase during the summer of 1998. In addition, 1997/1998 was a very strong El Nino year. This transferred excess mass in water vapor to the atmosphere during the summer of 1998. The El Nino made the northern hemisphere subtropical westerly jet turn into a subtropical easterly jet. To make matters even strong, 1998 marked the start of a strong La Nina. The combination of these events made for a very abrupt change in length of day.

Question; How is it physically possible that such a amount of some energy is stored in Earth for such a long time, and could still be retrieved back to a rotational Kinetic energy still having even the correct (same) direction of rotation?

You should look instead to angular momentum. This is the answer to your question. External torques do act on the Earth, sometimes speeding it up, other times slowing it down (see the first graph). In addition to this cyclical behavior, these tidal interactions have a smaller secular effect that increase the length of a day by about two milliseconds per century. After accounting for these known interactions, what's left is essentially a torque-free system in which angular momentum is conserved. (Energy is not.) The primary components of this system are the inner core, the outer core, the crust and mantle, the oceans, and the atmosphere.

As described above, rapid (a couple of years or faster) variations in the rotation rate of the crust and mantle are largely a consequence of exchange of angular momentum between the crust and the atmosphere, with the oceans playing a reduced role. Longer term variations (several years to several decades) are generally assumed to be a result of exchanges of angular momentum between the mantle, the outer core, and inner core. There are good (but not yet great) correlations between long-term variations in length of day and variations in the Earth's geomagnetic field, and there are signs that the inner core is currently rotating slightly faster than is the crust and mantle.

There also is a recently discovered 5.9 year cycle believed to be caused by the mantle "wobbling" on the liquid core.ref2

The length of day is also affected by the Sun's activity (sunspot) cycle.ref3 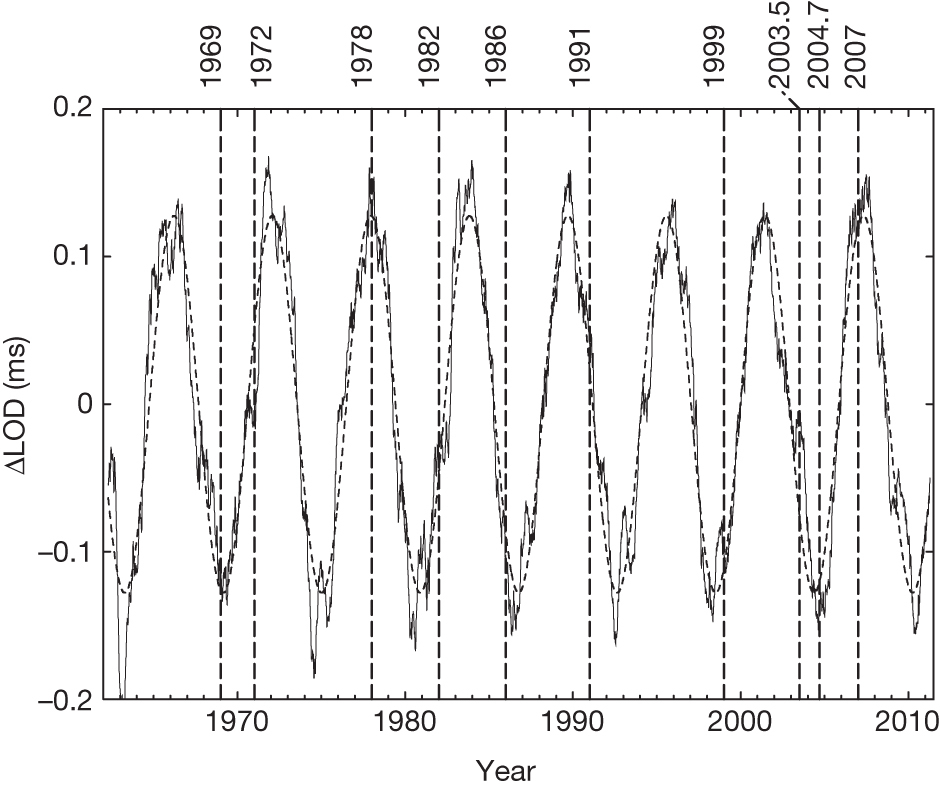 As Earth rotates, the Moon's gravity causes the oceans to rise and fall. (The Sun also does this, but not as much.) There is a little bit of friction between the tides and the turning Earth, causing the rotation to slow down just a little.

Since the amount of water in the Ocean varies this too will impact the rotational effect of tides. I can not take the time to do the calculations but this seems reasonable.

This may be the basis for spin but I am sure that ionic difference of 300,000 volts of potential between the ionosphere and the negative ground earth while rotating through the suns magnetic field will create a Lenz drag of sorts that also needs to be taken into the calculations. I will address this last point when I have some free time.

I want to answer to my own Question to simply summarize the various answers;

And Both changes increased the rotation speed of Earth!

Hadley cell's Produces 198 TW of kinetic energy to Atmosphere in yearly average, but Ferrel cells consume's 275 TW, so we end up having -77 TW of kinetic power loss in system.

Madden-Julian oscillation, MJO rains with factor 5 compared to Hadley-Cell, and it's Hight is also 15 km, compared to 10-15 km hight of Hadley. I didn't found Information about the Energetics of Madden-Julian, but if we scale it with factor 5, based on the rain amount, we would have (5 x 198 TW ~) 1000 TW. Due to the nature of MJO, It can easily have even many times higher power. Obvious is also, that the MJO pushes and pulls the air in approx 13 000 km distance 1/3 of earths Circumference, and there is a simultaniously a mass transfer to an greater radius in order of 7-10 km. Thus acceleration of LOD is possible.

Further conclutions about the Sun's affect to LOD are;

According to Jianli Chen, 2005, Global Mass balance and the Length-of-day Variation, Summary;

However, when a full mass balance is applied, the seasonal oceanic and hydrological exictations become too small to explain the residual LOD changes.

The fluctuation in the length-of-day of 1500-year period is currently unknown origin. However, given its large amplitude which is too large to be caused by atmospheric and oceanic processes but which is comparable in size to the amplitude of the decadal variations, it is probably caused by the same core-mantle interactions, such as gravitational coupling, that are known to cause decadal variations in the lenght-of-day. 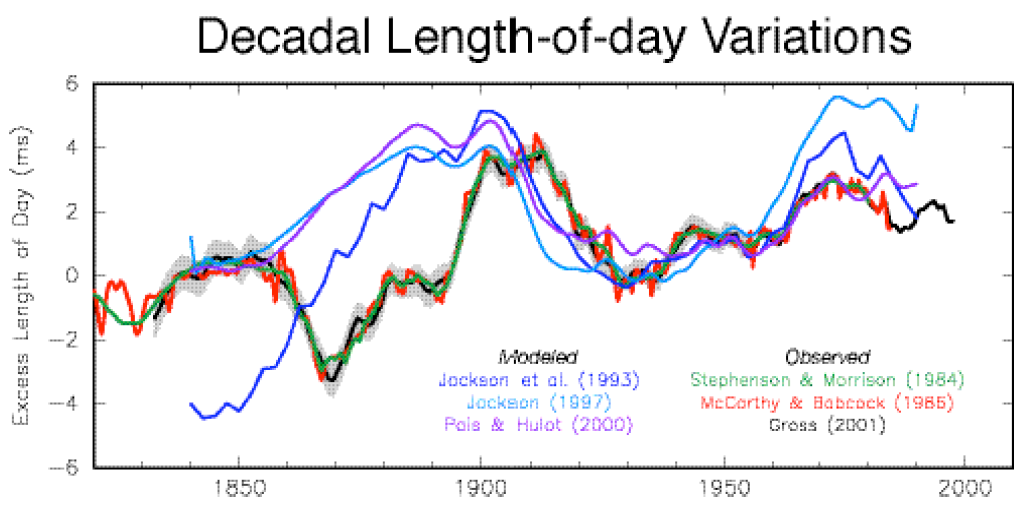 It can be concluded, that the internal energy production of Earth can't provide the needed power to the accelerating variations of LOD. It can further concluded, that only the 77 TW energy consumption of Ferrel- and Hadley Cell combination is enough to reduce the LOD around 15 ms in just 30 years. Sea-current's and other losses would only increase this. Thus, it must be concluded, that the only source for the rotation can be the sun. There is already many 4-5 ms observed accelerations in the past, happened in only 20 Years. To put these on scale, it means that the 86400 s rotation time could be achieved in only approx 20 Million years. Look other planets; Rotation of Uranus? Magnetic field of Venus?

Not the answer you're looking for? Browse other questions tagged newtonian-mechanics forces energy-conservation rotational-dynamics rotational-kinematics or ask your own question.

4
Can a Storm make the day longer/shorter?
0
How is it possible that Thermosphere can maintain so much heat?
1
Mercury's rotation, Disturbation's caused by thermodynamics
1
Uranus, the Physical model to change its rotation axle

3
Altering Venus rotational speed to match Earth's via weather manipulation
0
How much energy is necessary to set a year to exactly 360 days
6
How much effort would be required to fix the Earth's rotation?
1
Variance of earth's rotational speed due to tidal effects
0
Confusion About Conservation Of Energy When Analyzing This Experiment
1
Angular momentum of the earth
4
Can tidal locking increase rotational kinetic energy? Where does the energy come from then?