Many people have been using very confusing and sometimes contradictory language when describing electromagnetic fields and electromagnetic radiation. It's going to be hard to word this question so everyone understands so I'm going to use some examples.

Here is an experiment example. Say I did a variation of the double-slit experiment. In this variation, instead of having one source that emits electromagnetic radiation from behind the two slits, there are two sources, one at each slit. In essence, I'm performing two single-slit experiments right next to each other projecting onto the same surface. Instead of firing only one photon at a time, each source fires a single photon at a time, both sources firing at the same time. 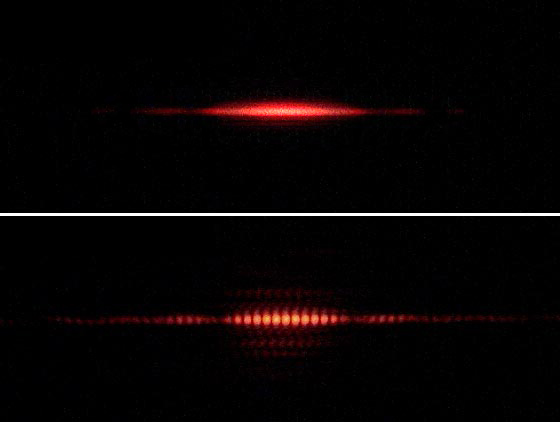 A good way of phrasing my question with that use of vocabulary would be: "Does an electromagnetic continuum exist, or is it all just separate electromagnetic fields and oscillations?"

I hope these examples give enough information for you to understand my question(s) and correct any misconceptions I may have.

where $\phi$ is the electric potential. It is very important to appreciate that the values we get for $\mathbf{E}$ and $\mathbf{B}$ are coordinate dependant, by which I mean that observers in different frames will measure different values for $\mathbf{E}$ and $\mathbf{B}$. You can see this very easily. Suppose in my frame I have a charge at rest, in which case that charge generates a static electric field and no magnetic field. If you are moving with respect to me then you observe a moving charge, i.e. a current, and currents generate magnetic fields.

So if you are considering an all encompassing field this would have to be the four potential. But the four-potential is not a physical object. It is a function of spacetime. If you feed a spacetime point into the function it will return a vector that describes the electric and magnetic potentials at that point.

But the function $f_A$ can be broken up into a sum of separate functions for each charge:

and we could write this as:

where you can regard $\mathbf{A}_0$ as the four-potential of charge 0 and so on.

Now back to your question:

At every point in spacetime there is just one value for $\mathbf{A}$. The four potential cannot simultaneously have more than one value. However we can write that value as a sum of the four-potential of every charge.

I think which of these interpretations you prefer is philosophy rather than physics. My view is that there is a single four-potential and it can be mathematically decomposed into individual components.

The answer by W.Barnett is a handwaving one in the framework of quantum electrodynamics.

John Rennie's answer is in the framework of classical electrodynamics.

First let us define what a field is in physics:

In physics, a field is a physical quantity that has a value for each point in space and time.

Moreover, within each category (scalar, vector, tensor), a field can be either a classical field or a quantum field, depending on whether it is characterized by numbers or quantum operators respectively.

So one has to keep oranges and apples clearly in one's mind when talkign of fields.

The classical framework is simple and the single potential field can be supposed to be the underlying field. In John's answer the electromagnetic four-potential ( a four vector) is the field that is defined at every (x,y,z,t) point in space. This can be zero, no energy at that point, or have some values because a charge exists in the neighborhood, or an electromagnetic wave is passing ( classical electromagnetic radiation).

Coming to your question:

A good way of phrasing my question with that use of vocabulary would be: "Does an electromagnetic continuum exist, or is it all just separate electromagnetic fields and oscillations?"

It depends on which framework, classical or quantum dynamical the viewpoint rests. In the classical formulation John's answer is sufficient, a four vector field can be defined, it is not "electromagnetic" but both electricity and magnetism and radiation can be built up by this field.

In the quantum mechanical formulation with creation and annihilation operators there will be a field of operators, with creation and annihilation of photons which build up the electrical and magnetic fields. Also radiation itself, being the photon , continually is created (ahead) and destroyed ( behind) as it rushes off on the geodesic towards infinity or interaction.

So something more complicated than an electromagnetic continuum represents reality as we have observed and measured it.

Now your thought experiment with the two slits is irrelevant to the above discussion, as it will depend on the boundary conditions of the experiment, whether the quantum mechanical solution which gives the probability of finding the photon on the (x,y) of a screen at z will show an interference. Two independent laser beams can show interferences, depending on the boundary conditions.

Not the answer you're looking for? Browse other questions tagged electromagnetism waves electromagnetic-radiation or ask your own question.

153
What is a field, really?
0
Is there one all encompassing higgs field? Or are many higgs fields separate and individually generated?