Why don't dielectric materials have coloured reflections like conductors?

I'm a 3D artist trying to learn the basic (or perhaps even intermediate) level of physics of photorealistic rendering. But most artist and tutorials on the internet have little to no clue of the physics behind all the settings they tweaking to get a good rendering. I want to understand what it is I'm actually doing :)

So my question is: Why don't dielectric materials have coloured reflections like conductors? Metals like copper tint the reflection with a red-ish color, but a red rubber ball does not, why is that?

In this image you can see the reflection of the white and blue pencil is being tinted slightly yellow in the brass material. 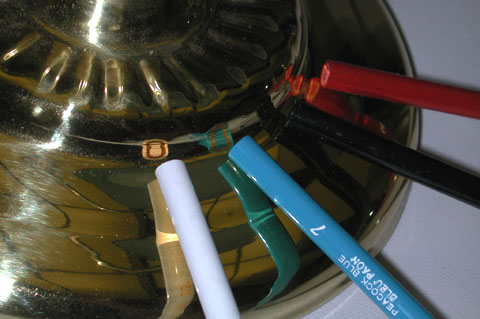 In this image you can see the white reflections in the blue plastic, the mirror image in the plastic is NOT being tinted blue. 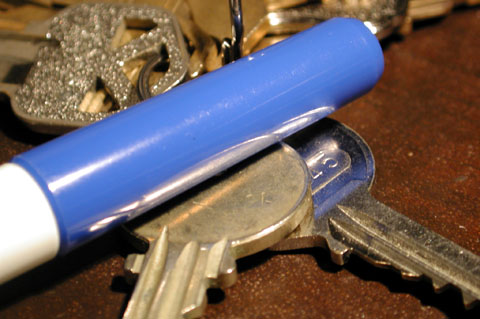 But what about, let's say an red apple? Is the apple peel some sort of oily coating layer filled with red pigments? Or is it just made out of "apple peel molecules" and it is simply the physical/chemical properties of these atomic/molecular bonds that effect the light in that way?

The short answer is: Because metals are really absorptive (which comes from the fact that the nearly free electrons in the metal follow the oscillations of the radiation thereby depleting its energy), but some only in part of the visible range.

So, the reflection on the surface of metals is mainly due to the imaginary part of the index of refraction (that is, the absorptivity). For coloured metals like copper or gold the so called "plasma frequency" of the metal above which the metal begins to loose its strong absorptivity is in the visible range (or in the near UV). Therefore such metals only reflect a portion of the spectrum, well you get a tinted reflection.

The other materials (plastic, glass, apples) have one thing in common: they have a relatively low absorptivity (while for metals the wave only enters a few nanometers, the other materials range from transparent to waves entering at least several micrometers; the absorption caused by pigments in the material is typically much weaker than the one in metals). This means that the reflection is caused by the change of the real part of the index of refraction. As most materials are only slightly dispersive in the optical range, this means that all frequencies are reflected more or less equally, therefore the reflection is not tinted.

Plastics and biologic materials are very similar to the paint example you gave: they are basically transparent (well, translucent), and their color come from pigments inside. So the first air/material dioptre the light encounter is (mostly) color-neutral (at least for smooth surfaces), and specular is caused by the Fresnel term on this surface. Diffuse color really comes from the light entering the medium and diffusing once or more on pigments (+ligand, possibly).

Sebastian Riese's answer is very insightful and detailed, but it gets one thing wrong, and for sake of correctness and completeness (and since your questions specifically refers to copper), I think the explanation is better suited as an answer than a comment.

For coloured metals like copper or gold the so called "plasma frequency" of the metal above which the metal begins to loose its strong absorptivity is in the visible range (or in the near UV). Therefore such metals only reflect a portion of the spectrum, well you get a tinted reflection.

This is not correct, since the plasma frequencies of coloured metals such as copper ($\nu = 2.61$ THz) and gold ($\nu = 2.18$ THz) lie entirely in the UV, and one would therefore expect them to be completely reflective at the visible frequencies.

The reason for their coloured reflection is due to Interband Absorption. As Sebastian said, when metals are hit by EM radiation at frequencies below the plasma frequency, incoming radiation is almost completely reflected, but penetrates slightly into the metal (see Skin Effect). In the case of most metals (those that appear as having the typical "metallic" color) in this small length absorption by the free electrons of the metal occur, which eliminates the small fraction of the incoming wave that wasn't immediately reflected, so that it doesn't penetrate into the medium.

It seems like the answers here are a bit "too clever" - one can simply look into the Photoelectric Effect in order to understand why Metals are Much more reflective than any other dielectric material.

Not the answer you're looking for? Browse other questions tagged visible-light material-science reflection metals or ask your own question.

285
Why don't metals bond when touched together?
0
Why mirrors form image and others don't?
2
Why conductors don't scatter light?
1
WHY are reflections stronger at an angle acording to the Fresnel equation?
1
Why are iron and copper used more than other materials to make cooking pots?
2
Anti-blue light gear. Some claim to filter blue light without changing color perception. Real or fake?