How to compute the intensity of a polarized wave going through a polaroid?

Now, if the electric field varies on an arbitrary curve and we know the parametric equation of this curve (for example, it rotates around an ellipse), given a particular direction of the axis of the polaroid, how can we compute the intensity of the resulting wave?

A standart way of computation is to use Jones calculus. In this formalism complex amplitude of the electric field is expressed as a two-component vector: $$\left|\mathcal{E}\right>=\left( \begin{array}{c} \mathcal{E_x}\\ \mathcal{E_y}\\ \end{array} \right)= \left|\mathcal{E}\right|\left( \begin{array}{c} \mathcal{a}\\ \mathcal{\sqrt{1-a^2}e^{i\varphi}}\\ \end{array} \right),$$ whith $0\leq a\leq1$ (usually one uses normalized Jones vectors, but let's leave it as is). Any polarization-sensitive optical element is described by some operator acting on Jones vectors. A polarizer, rotated at angle $\alpha$ with respect to $x$ axis is essintially a projector on $\left|P_\alpha\right>=\left(\cos{\alpha},\sin{\alpha}\right)^T$, and the intensity is modulus squared of the inner product $I=\left|\left<P_\alpha|\mathcal{E}\right>\right|^2$. Simple calculation leads to the following result: $$I(\alpha)=\left|\mathcal{E}\right|^2\left(a^2\cos^2\alpha+(1-a^2)\sin^2\alpha+a\sqrt{1-a^2}\sin 2\alpha \cos \varphi\right),$$ which is in general not an ellipse. As an example, that is how it looks like for $a=1/\sqrt{2},\varphi=\pi/3$: 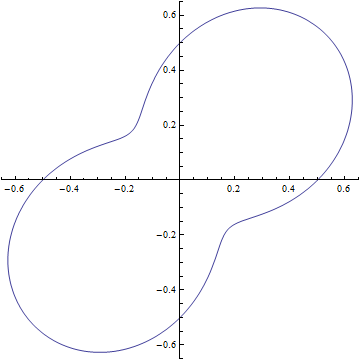 Not the answer you're looking for? Browse other questions tagged optics waves polarization or ask your own question.