Would a camera that only takes light at 90 degrees work?

From what I understand cameras and biological eyes work in a similar fashion, they all take light in a cone and distances are perceived as the angle which the object takes up rather than it's physical size. This means that objects further away seem smaller even if they are exceptionally large, such as a star which looks as just a point.

If we were to create a camera that, rather than focusing light on a point, only registers light that hits it at a perfect 90 degree angle perpendicular to the surface of the camera would that allow us to see objects at any distance the same as if it was right in front of us?

Assuming this is the gist of how a camera works: 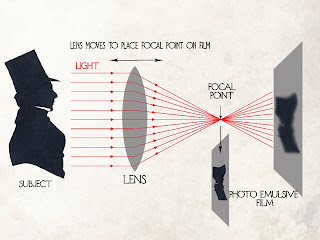 If we remove the lens and just let the light hit the film directly, while somehow cancelling any light that hits from the side, what would happen?

Seems that what you've described is essentially equivalent to a pinhole camera. For both cameras, only a single ray of light goes from any single point on the object to its corresponding point on the image plane. In contrast, with a standard camera lens system, the lens captures multiple rays of light over its lens surface from any single given point on the object and directs all of those light rays to the same corresponding point on its image plane. That results in a great increase in light collection efficiency and shorter exposure times. In contrast, both your proposed "90-degree" camera and the pinhole camera are very 'slow' and inefficient camera systems since they only allow a single ray of light from any given point on the object to get to its image plane. All the other rays of light are effectively rejected by the cameras.

Although your proposed "90-degree" camera and a pinhole camera are similar in the sense that they are both "single-ray" cameras, I think that a pinhole camera offers more flexibility. For your "90-degree camera", the only way to take a picture of a large object such as a mountain in a single exposure would be to build a camera as large as the mountain. There is no way to adjust the camera magnification. With a pinhole camera, on the other hand, you could take a picture of a mountain on a small piece of film by adjusting the image size by the method mentioned above.

Not the answer you're looking for? Browse other questions tagged optics visible-light camera or ask your own question.

2
Pinhole Camera Problem!
4
Capture the entire light field of a 3D scene and construct a virtual scene
0
How does the diaphragm in a camera work?
3
Why farther objects do not look dimmer?
0
Basics of camera calibration