A friend showed me a tippe top (a special kind of spinning top) lately and asked me about the physics behind it. I thought about it for a while but cannot quite figure it out. So I will throw the question to SE. Below is a picture of tippe top: 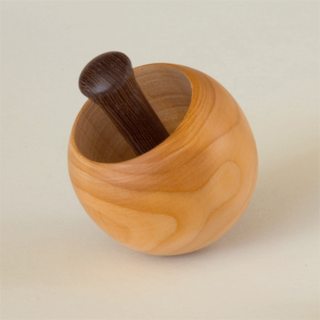 So basically the strange effect is that when you spin such a top fast enough with its round surface touching the table, the top will wobble and eventually invert itself. There is a video of this effect at wiki commons and here is an illustrative picture:

I am looking for some intuitive explanations that do not involve too much mathematics. Heuristic approaches are welcomed!

a simple explanation which comes to my mind is that the geometrical centre of the top doesnt match with its centre of mass. thus the rotational axis is different from the geometrical axis. so when the top is rotated it tilts over to rotate about its axis and during this course of motion the surface provides the torque(because of friction) and the top gets inverted. thus more the angular velocity more will be the torque due to frictional force.

Q1: Without table top friction, the top won’t invert. This proves that frictional forces cause the inverting effect. And when the spindle hits the tabletop, the Tippe Top jumps up to inversion - presumably due to the increased distance between the spindle top and the axis of spin. This would increase any torque effects. I guess it’s similar to gyroscopic precession. But the top does not behave like a gyroscope, as the axis of spin relative to the body shape keeps changing, and the top ends up spinning in the opposite direction to its initial spin - fascinating.

Q2: It doesn’t flip at low speeds because there is not enough kinetic energy to convert to potential energy for inversion. The centre of gravity is initially lower than its geometrical centre, due to material being removed from around the spindle. It rises during inversion.

Q3: A hard boiled egg spun horizontally will also rise up to vertical, with the heaviest end highest.

Not the answer you're looking for? Browse other questions tagged newtonian-mechanics angular-momentum rotational-dynamics everyday-life rigid-body-dynamics or ask your own question.

2
Double gyroscope: Can a spinning pencil tumble on only one axis?
8
In tennis, why does topspin serve bounce higher than flat serve?
2
Chiral tippe top
39
Should a soda bottle be stored horizontally or vertically?
0
Euler's equations and free rotating symmetric top
0
Can angular momentum be converted to translational momentum?
0
Intuitive explanation for parallel axis theorem