The results of all four measurements are then compared. If Victor did not entangle his two photons, the photons received by Alice and Bob are uncorrelated with each other: the outcome of their measurements are consistent with random chance. (This is the "entanglement swapping" portion of the name.) If Victor entangled the photons, then Alice and Bob's photons have correlated polarizations—even though they were not part of the same system and never interacted.

Longer explanation can be found from: Does the passage of time effect a photons entanglement with another?

We have two pairs of qubits, Alice and Bob receive one qubit from one pair (1,4) while Victor gets two (2,3). If Victor does not entangle his qubits, Alice's and Bob's measurements are uncorrelated. That part is clear.

On the other hand if Victor does decide to entangle qubits 2 and 3 then they are projected into Bell state and may take on values 01 or 10 or 11 or 00. As a result qubits 1 and 4 become entangled and have the same previously mentioned set of four superpositions that they might be in. So Alice and Bob can measure respectively 0 and 1 or 1 and 0 or 1 and 1 or 0 and 0.

Entanglement swapping is based on one trick: you can sum together states where Alice and Bob's qubits are entangled in different ways to create a system where their qubits are not entangled. It's possible to create such a state without having Alice and Bob interact with a third party (instead of each other), and the third party measuring their qubits will drop us into one of the entangled sub-cases. 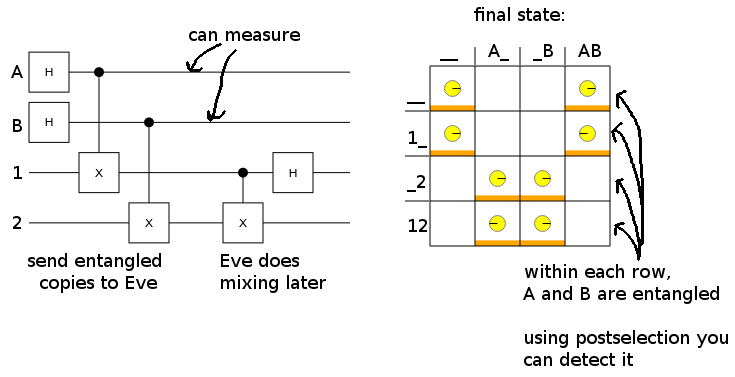 The left of the diagram shows a circuit for setting up the state shown on the right. The state diagram is arranged into a grid of local-to-Alice-and-Bob bits vs local-to-Eve bits. It shows the amplitudes for the sixteen possible qubit assignments (0000, 0001, 0010, 0011, 0100, etc). The amplitudes are shown as oriented circles, where right-facing is positive and left-facing is negative. For example: the top-left cell indicates the 0000 state having an amplitude of $+\frac{1}{4}$, the bottom-right cell indicates that the 1111 state has no amplitude, etc.

Anyways, imagine that you run some bell tests between Alice and Bob's qubits. They will fail the test, because in the overall system their qubits are not entangled. But if you throw out all the tests except the ones where Eve measured 00, putting us into the top row where $\psi_{AB} = \frac{1}{\sqrt{2}} \left|00\right\rangle + \frac{1}{\sqrt{2}} \left|11\right\rangle$, then that subset will be passing the tests!

The same is true of the other three Eve-measurement-outcome cases (01, 10, and 11): each violates the bell inequalities, but in different complementary ways that average into not passing any of the tests if you can't distinguish between the cases. (If you're allowed to perform operations conditioned on Eve's measurements before starting the bell tests, you can get all four cases into the same EPR state and pass unconditionally.)

I know it's an overly simplified example but i think it captures the essence of entanglement...

Let's say Bob and Alice each have a red and a blue marble, and they're both at opposite ends of the Earth. The mix them up behind their backs, hold out their hands with one marble in each, and ask a bystander to pick a hand simultaneously. If these systems were entangled, the bystanders would pick the same marble more than 50% of the time.

So for your questions, as you can see, no one knows what marble they'll pick, but they know that there's a greater than 50% chance of selecting the same marble. If they don't select a hand at the same time, one measurement will destroy the entanglement so the second measurement wouldn't be relevant.

6
Does the passage of time effect a photons entanglement with another?