I've been trying to use the Gibbs Ensemble Monte Carlo method for finding the liquid and vapor phases for a given particle interaction. This method sets up two isothermal subsystems that exchange particles and volume, but otherwise don't interact. In principle, these two systems should equilibrate so that one contains the liquid phase, and the other the vapor phase. This gives you the densities of each phase in a single simulation. 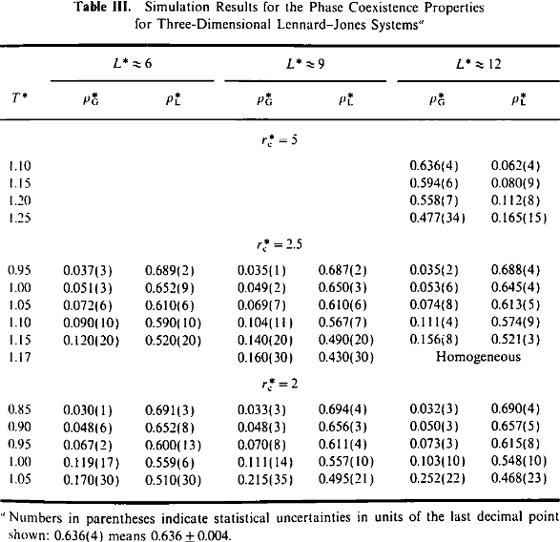 I find I get results pretty close to this for the liquid phase at $T^*=1$, but the gas phase is much denser than it should be -- $\rho^*_g=$.1 to .2. Worse, the density of the gas depends on the initial density of the whole system, which should not be the case.

I've built the simulation in two completely different languages and gotten the same results, so it isn't a simple bug. The systems correctly exchange volume and particles, and particles inside each arrange themselves as I would expect. The only thing I do differently than the algorithm is to rescale $\sigma$ to change volume (instead of changing the box size and rescaling the particle positions).

I finally discovered the problem, and I'll put it here because it might trip up others in the future. I was iterating by particle: that is, I would choose a particle, decide the kind of move to try, and attempt it. The paper I cited assumes you decide the kind of move to try, then pick a particle to try that move with. For translation moves this doesn't matter. But for exchanging particles, this matters a lot: if you have twice as many particles in one container as the other, then iterating by particles means you will try to move from the more populous container twice as often as you should.

Not the answer you're looking for? Browse other questions tagged statistical-mechanics phase-diagram or ask your own question.

1
Parameter determining argon phase
18
Phase transition water
14
How do I determine equilibration in a Monte Carlo $NVT $ simulation?
2
What exactly is the driving force of a vapor turning into a liquid once it tips just above the saturated state?
1
Estimating the inter-molecular van der Waals' force from the boiling point of water
1
Equation of state of Lennard-Jones spheres
3
How to interpret phase diagrams?
3
Why use partial pressure, not chemical potential, to describe vapor phenomena?
0
Derivation of temperature with presumption of microcanonical ensemble?
1
Bose condensation as the coexistence of a "normal gas" and a "liquid"