How does localization affect interferometry?

A classic setup (I suppose it's classic) in introductory quantum mechanics has a single photon passing through a double slitted grating. Directly across each slit of the grating is a device that can identify which particular slit a photon passed through. In this setup, the uptake is that, if you can distinguish which slit a photon passes through (i.e. localize the photon), you collapse the wavefunction and prevent any interference pattern from forming on the screen past the grating.

A practice question -- which forms the basis for this conceptual question (see below) -- localizes a photon but, this time, has it sent through an interferomter. It asks what would happen to the probability of such a particle if we also moved the right arm slightly outwards (please read the question too!). From what I understand, however, localization shouldn't bear any single consequence in interferometry. This is what I would argue:

b) If we localize the particle, we confine its wavefunction to a certain range.

c) Consequently, unable to take on its original, full range (given by $\psi$), the photon doesn't superimpose to produce all possible intereference constructions of amplitude (the phase angle, $\phi$, has a limited set of values).

d) This could mean anything! Without knowledge of where $\psi$ is limited, many possible, albeit limited, wavefunctions result.

How does localizing the particle, in interferomtery, prevent an inteference pattern from forming? 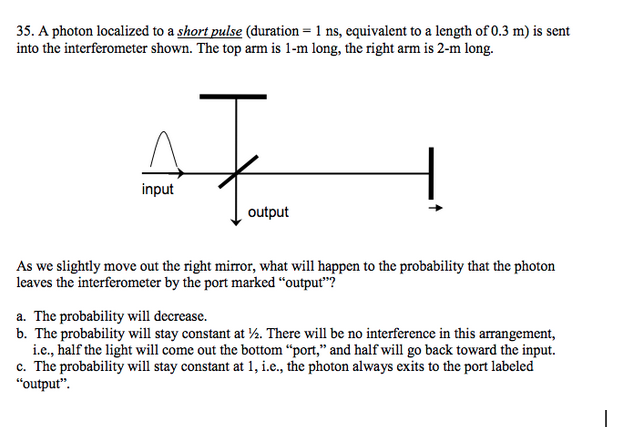 The localization referred to in the actual problem has to do with the length of the pulse (duration $\rightarrow$ length), whereas localization via which-path measurement in the double-slit setup concerns the transversal extent of the wave function ("around one slit" vs. "over two slits"). Since the pulse entering the interferometer is generally assumed to be rather localized transversally, and propagation in the interferometer does not affect transversal localization, the analogy with the double-slit doesn't provide much insight in this case.

As for how the longitudinal localization of the pulse determines whether or not there is an interference pattern, take a careful look at the geometry of the interferometer. You have a 0.3m long wave packet propagating at light speed that is split in two by the beam-splitter at first pass. Let $L=2m$ be the length of the long arm of the interferometer. In a time $\Delta t = L/c$, one branch of the split wave packet goes all the way around the shorter arm and returns to the beam splitter for a second pass. During the same time, the other branch of the wave packet just about reaches the mirror at the end of the longer arm. It will take it $\Delta t$ more time to return to the beam splitter, and by now the first branch has long cleared the interferometer. The second wave packet has nothing to interfere with. The situation doesn't change if the right mirror is moved to the right, since it only adds to the length $L$ and the time $\Delta t$.

To get a probability explicitly, simply notice that after the second pass through the beam splitter the wave function is split in 4 mutually orthogonal components with identical weight ( $\frac{1}{2}$ ) and extract the probability from the corresponding amplitudes.

Not the answer you're looking for? Browse other questions tagged quantum-mechanics homework-and-exercises photons interferometry or ask your own question.

2
Double slit experiment and indirect measurements
6
Slit screen and wave-particle duality
0
Double-double-slit with entangled photons
4
Single photon interference
2
Does simply putting a photon-splitting crystal after a double slit break the interference pattern?
1
How does which-slit information destroy interference?
1
Why can't a single photon pass through a slit if it is perpendicularly (relative to the slit) polarized?
3
Why Do We Ever Get Interference in a Quantum Eraser?