Terminal velocity and distance traveled with constant but limited power

I'm trying to model how far to move an object over time according to a power applied resisted by friction.

So maybe... an object accelerates at a certain rate until the power provided can no longer overcome friction (in relation to mass of the object), causing the object to move at a constant velocity as long as power is still applied (and slow down due to friction once the power stops acting on it). Answering the questions: What the the position, velocity, and acceleration at a certain period of time? After a certain time interval the velocity and acceleration should be constant by these criteria. Also, how is the terminal velocity in this situation determined?

For a real-life example, a car can accelerate over time, up to a certain max speed where the power of the car cannot overcome the force of friction/drag.

All the examples I have found relate to aerodynamic drag, thus the resistance scales with the velocity, though I'm not sure how this would apply in a different case.

If we apply a force $F$ to a mass $m$ and a friction force (drag) $F_d$ also acts on it the force diagram becomes:

With $a$ the acceleration the object experiences, the equation of motion becomes:

Now the question becomes, what is $F_d$?

We know that in general $F_d \propto v^n$, where $v$ is the velocity and $n$ is some exponent. For instance in the case Navier Stokes drag (viscous drag of a fluid on a spherical object), $n=1$.

For the case of air drag the exponent $n=2$ is generally assumed.

$P=mv\frac{dv}{dt}+kv^2$, a differential equation that can be separated by variables to yield:

This can be integrated between $t=0, v=0$ and $t, v$ and yields after reworking:

Since as the terminal speed is only achieved for $t = \infty$, it will be achieved also only for $x = \infty$.

The general shape of the $(v,t)$ function is as follows, with $v_t$ being reached only asymptotically: 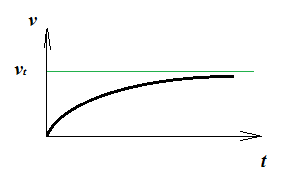 This may not be the ultimate answer as I don't know the quantitative relations between variables. But I can say the following:

The ultimate velocity is determined by the power ($P$) of the car (or other objects, let's use car for example) and the friction ($\mathbf{f}$). Now that $$P=\mathbf{v}\cdot \mathbf{f}$$ It means that all the power of the car is used to overcome the friction to move in a constant speed. Once you know the two parameters, you can get the velocity $\mathbf{v}$ easily.

The acceleration can be calculated from the function of $\mathbf{f}$ over time and the mass of the car ($m$) by $$\mathbf{a}(t)=\left(\frac{P}{v}\mathbf{e}_v-\mathbf{f}\right)/m,$$ where you should know how the friction related to speed and position. $\mathbf{e}_v$ is the direction vector of the velocity $\mathbf{v}$ at time $t$.

The position of the car is just a time integral of velocity, with the velocity is just the time integral of the acceleration. You can calculate them easily if you know the rest of the relationships--especially how the friction relates to velocity and so on. You may get a set of equations to fully solve the problem.

Here are some simple cases applied from How to get distance when acceleration is not constant?

The velocity profile is too complex for the last case to include in this answer. You are welcome to use Wolfram Alpha to solve the integrals yourself.

Not the answer you're looking for? Browse other questions tagged newtonian-mechanics friction acceleration or ask your own question.

19
How to get distance when acceleration is not constant?
-1
Finding the distance travelled during change in velocity from $v_i$ to $v_f$