What is used to measure the spin of a particle?

I was wondering what is the specific system or method that is used to measure spin of a particle? e.g. In a lab what would they use to tell what a particles spin is?

P.S. I am new to stack exchange so please tell me if I formatted this wrong or need to change anything about my question. Thank you very much.

First, it is worth mentioning that while the word measurement is used, the experimental process involved actually changes the state rather than revealing some preexisting property.

So the spin interactions literally change the state.

That said, the main idea is that you first pick a direction. Then you arrange an interaction that interacts with the different states in different ways such that when repeated, they don't get split further. Then you split the state into those states, then eigenstates, and do it in a way that allows the different states to become so separated that each is capable of acting like it is the one state in the universe. At this point it is acceptable to say a measurement has occurred.

A Stern-Gerlach device is a common device that can do this interaction.

Once the stable particles , electron and proton have had their spin determined by the stern gerlach method as discussed in the other answer, one can start building up the spins of the elementary particles and the resonances.

The spins of the particles have been determined by the angular distributions of decay products.

Example: the Higgs has been declared the Higgs because it is a scalar

Examining decay patterns. Spin-1 had been ruled out at the time of initial discovery by the observed decay to two photons (γ γ), leaving spin-0 and spin-2 as remaining candidates. 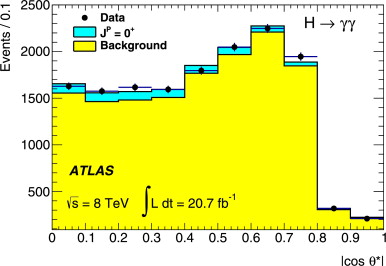 Distribution of |cosθ⁎| for events in the signal region defined by 122GeV(lt)mγγ(lt)130GeV. The data (dots) are overlaid with the projection of the signal (blue/dark band) and background (yellow/light histogram) components obtained from the inclusive fit of the data under the spin-0 hypothesis.

The various analysis use extensively also conservation of angular momentum, i.e. knowing the spins of all the other particles except the one under study.

2
Are all kind of measurements of properties in the two slit-experiment destroying interference?

0
Is the quantum state or information of a particle is all that differentiates it from another particle?
19
A reading list to build up to the spin statistics theorem
3
Thought experiment with entangled electrons
4
Is the symmetry group of two spin 1/2 particles $SU(2) \times SU(2)$ or $SU(4)$?
16
When an electron changes its spin, or any other intrinsic property, is it still the same electron?