Suppose we have a rigid system of two point objects (both of unit mass) connected with a massless rod, with the objects horizontal on the x axis, at a distance $r_1$ and $r_2$ from the origin, respectively. A vertical force $F1$ is applied to the first object, and causes an angular acceleration $\alpha$ of the system around the origin. 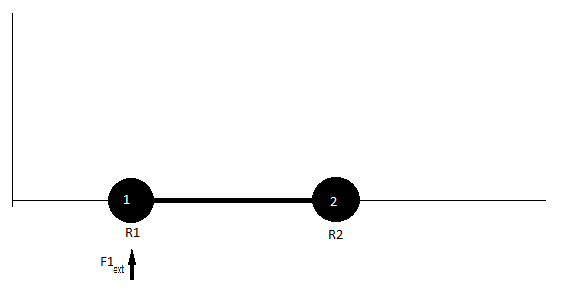 What is wrong with the above?

The 2nd solution you wrote down appears to be the correct solution. Offhand, I see two problems in the first solution. First, I think that a problem with the first attempted solution is that you made a subtle mistake in assuming that F=ma means that $F=mr_1α$. That seems like a plausible step at first but if you examine this step more closely you'll realize that it can't be correct to say that the acceleration of an object in this case is simply equal to the distance from the point of rotation times the angular acceleration. Suppose that the angular acceleration is zero (e.g., the masses are spinning around the origin at a constant angular velocity). According to your reasoning that would mean that the acceleration of the object is also zero. But you do know that an object spinning around a origin at a constant angular velocity doesn't have a zero acceleration, right? Rather, it has an acceleration vector which is of constant magnitude and always pointing toward the origin.

Another problem I see is that these are not freely moving masses being acted upon by only a force $F1_{ext}$. There are also the "hidden" forces of constraint which are forcing the masses to revolve around the point of origin.

Not the answer you're looking for? Browse other questions tagged newtonian-mechanics classical-mechanics rotational-dynamics torque or ask your own question.

2
Calculating Rotational Inertia Using Parallel Axis Theorem
4
Deriving torque equation from Newton's 2nd Law
0
Coordinate System vs. Angular Properties vs. Centroid
0
Net torque on an object when when all the forces pass through a common point
1
How does a rigid body constiting of two particles rotate?
6
Is Newton's third law a consequence of first and second law?