How fast does space/time travel?

It is said that before the big bang there was no before, as space/time was created in the big bang. The big bang creates a rapid expansion of space/time... so how fast is rapid?

Your question is very easy to answer because the answer is just the value of the Hubble constant (or its inverse the Hubble time). The trouble is that it's hard to explain to a non-physicist what the answer means. I'll have a go, but you may find it hard going.

Given that describing the expansion of the universe is quite complicated, there isn't a simple answer to your question How fast does space/time travel?, but we could for example as how long it takes the universe to double in size. That seems like a reasonable criterion for the speed of the expansion. This doubing time is called the Hubble time, and we can calculate it from the scale factor. The variation of the Hubble time looks like this (from the same question as the diagram above):

So there are lots of ways to describe how fast the universe is expanding, but no simple way. However I hope this has made things a bit clearer without melting too many brain cells.

How fast does space/time travel?

Fast. But note that there's no travelling per se, and that space expands. Have a google on that. Spacetime is a "space at all times" abstract thing. Here's a depiction of it, courtesy of NASA: 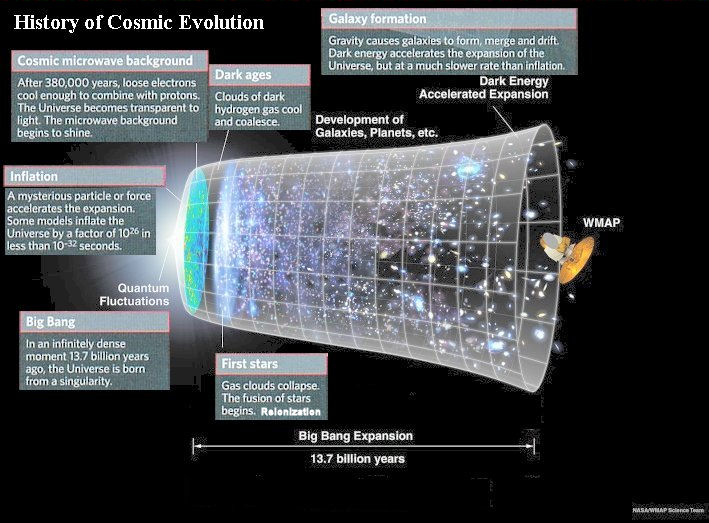 It looks like a champagne flute on its side, without a handle or base. The time axis goes from left to right, and the diameter increases. Let's say the real universe is spherical and getting bigger all the time. If you took a slice out of the middle every billion years and lined up all your slices left to right like slices of bread, the shape you'd end up with would be like this champagne flute. Every vertical line represents a billion years.

It is said that before the big bang there was no before, as space/time was created in the big bang. The big bang creates a rapid expansion of space/time... so how fast is rapid?

Fast. The big bang is the bright spot on the left where the champagne flute begins. The period after that is said to be when inflation occurred, when the universe expanded very very fast. However nobody knows this for sure, there's no actual evidence for inflation. There's is however good evidence that the universe is expanding. You can find articles like this about that:

"The most precise measurement ever made of the speed of the universe's expansion is in, thanks to NASA's Spitzer Space Telescope, and it's a doozy. Space itself is pulling apart at the seams, expanding at a rate of 74.3 plus or minus 2.1 kilometers (46.2 plus or minus 1.3 miles) per second per megaparsec (a megaparsec is roughly 3 million light-years). If those numbers are a little too much to contemplate, rest assured that's really, really fast. And it's getting faster all the time".

But that doesn't really tell you how fast. To get a feel for that, check out the observable universe on Wikipedia:

"The comoving distance from Earth to the edge of the observable universe is about 14 gigaparsecs (46 billion light years or 4.3×1026 meters) in any direction". 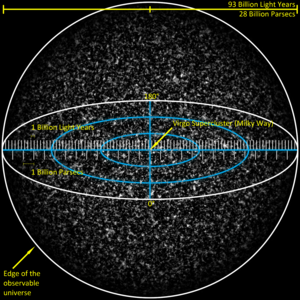 CCASA image of the observable universe by Azcolvin429, see Wikipedia

The radius has expanded from some small size to at least 46 billion light years in 13.8 billion years. So how fast is it expanding? On average it's at least 3.333333 times the speed of light. How's that for fast? And that's just for starters, because it's getting faster. And see articles like this which claim the diameter of the universe is at least 156 billion light years.

"All the distance covered by the light in the early universe gets increased by the expansion of the universe," explains Neil Cornish, an astrophysicist at Montana State University. "Think of it like compound interest". Need a visual? Imagine the universe just a million years after it was born, Cornish suggests. A batch of light travels for a year, covering one light-year. "At that time, the universe was about 1,000 times smaller than it is today," he said. "Thus, that one light-year has now stretched to become 1,000 light-years". All the pieces add up to 78 billion-light-years. The light has not travelled that far, but "the starting point of a photon reaching us today after traveling for 13.7 billion years is now 78 billion light-years away," Cornish said. That would be the radius of the universe, and twice that - 156 billion light-years - is the diameter. That's based on a view going 90 percent of the way back in time, so it might be slightly larger. "It can be thought of as a spherical diameter is the usual sense," Cornish added comfortingly.

Not the answer you're looking for? Browse other questions tagged cosmology spacetime universe space-expansion big-bang or ask your own question.

22
How does the Hubble parameter change with the age of the universe?

55
Can space expand with unlimited speed?
2
Classical Inflation Theory and the pre-existence of space-time