Rivers that flow "uphill" due to Earth's rotation

My questions are two:

The Mekong, at least after it has left the Tibetan plateau.

While the Mekong does flow "downhill" (toward the center of the Earth) at the start thanks to that four kilometer drop in altitude across the Tibetan plateau, it's pretty much all uphill from the Manwan Reservoir on.

There's a nice what-if scenario at esri, the Environmental Systems Research Institute, that asks and answers this question: If the Earth Stood Still: Modeling the absence of centrifugal force. The scenario investigates what would happen to the Earth's waters if the Earth somehow stopped rotating over the course of a few decades. That's a long enough span of time that the waters would have a chance to adjust, but far too short a span of time for isostasy to readjust the shape of the Earth.

Not only would the Mississippi stop flowing southward, the waters of the oceans would flow away from the equator. This would leave a globe-spanning equatorial bulge of land surrounded by two polar oceans. The end result: 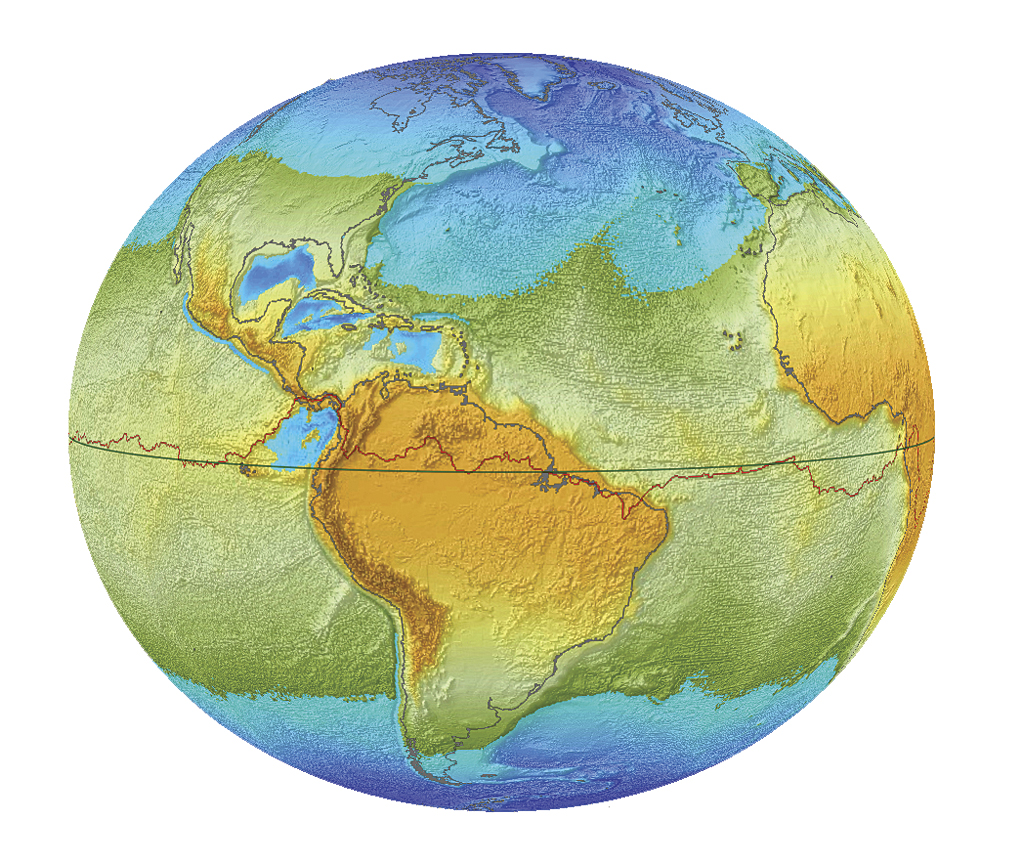 I can give a brief answer, though if anyone wants to do a better, more detailed one, feel free.

Sea level at the Equator is 21.36 km higher than at the poles. Source, and with a distance of about 10,000 km pole to equator, that's a natural rise moving towards the equator of 2.1 meters per km. That works out to 2.136 meters per km or a bit over 11 feet per mile, a 1 mile drop every 468 miles and I'm not sure earth's bulge spreads consistently, but a 1 mile drop over 468 miles is quite a bit and likely more than most longitudinal elevation drops. (I'm not sure longitudinal elevation drops is a proper term, but I like the way it sounds).

I'd wager that most equator bound rivers flow "up hill" compared to the center of the earth over most of their routes. I looked, but couldn't find any good lists for river elevation drops so I couldn't verify.

Does this mean that the Mississippi would flow north if the rotation of the Earth stopped?

Pretty much yes, but if the Earth stopped (and you ignore the other effects of stopping a 1,000 MPH rotation) then, not just the Mississippi but the Oceans and all water would flow North and not in small amounts. All of Alaska might be submerged and most of Canada and the equator, even around the oceans might lose all its water and form a land bridge. A 21.36 mile bulge in sea level is a LOT and if that suddenly goes away. Wow. The effect would extend way way way way past the Mississippi. This effect, of course, would only be temporary as the land too would correct itself from the Equatorial bulge too, just more slowly than the oceans and you might see a number of 11 or 12 or even 13 Richter scale earthquakes as the Earth made gravitational adjustments to undo its rotational bulge. (I rather like what if scenarios like this one. Kind of fun to imagine what they would be like).

since the oblateness of the Earth also causes a distortion of its gravity field (i.e., the equipotential surfaces are no longer perfect spheres), and this distortion would seem to be on the same order of magnitude as the small differences in elevation we're considering. In other words, if one uses the actual gravitational potential for a non-rotating oblate spheroid, is the Gulf of Mexico at a higher gravitational potential than Minnesota?

The Gulf of Mexico is actually lower gravity than Minnesota, for two reasons. The rotation effect, which you mention is bigger as you move towards the equator and that's the larger of the 2 effects but being further away from the center of mass also reduces gravity. You might think because there's more land under you that you'd weigh more, but you're also further from the center of mass, so the effect is that, even when you factor out rotation, you weigh slightly less in the Gulf of Mexico than in Minnesota, just as you weigh less at the top of Mt. Everest than at the foot of Everest. explained here

Not the answer you're looking for? Browse other questions tagged newtonian-gravity earth geophysics centrifugal-force or ask your own question.

11
Distribution of gravitational force on a non-rotating oblate spheroid

1
The shape of the earth$\ldots$
5
Does Earth's Rotation Affect Its Shape?
0
Earth's rotation isn't that orbit?
3
Why can't we feel the Earth (or being in any non-inertial frame) rotating?
1
What happens to the water on the surface of the Earth if the Earth is not rotating about its axis in the Earth-Moon system?
0
How do I quantitatively explain the effects of the centrifugal force from inertial frame of reference?