Potential Difference in a wire with no current

Recently I encountered a circuit problem. Imagine, you have an ordinary circuit with a resistor and a battery($60\,\mathrm{V}$ emf and negligible internal resistance denoted by r) with a switch($S_1$) connected in parallel (Call the end points of this wire AB).

The picture of the circuit is in the diagram below:-

Once you have drawn this, the question is as follows: If $S_1$ is open then what will be the potential difference across the endpoints of the switch.

Please give a logical explanation.

In the following situation 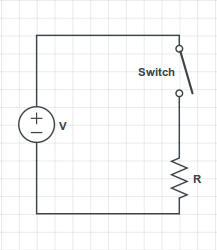 you have the voltage source ensuring a potential difference V = 60 Volts between its terminals. The source's upper terminal is connected to the switch's upper terminal, so they have the same electric potential.

Therefore, the potential difference across the switch is 60 Volts, even though there is no current flowing through it.

An open switch can be modelled as a resistor with infinite resistance, so if you apply Ohm's Law directly to it, you can have a potential difference even though the current flowing through it is zero.

In the following situation

In practice, what would happen is that the current flowing through the switch would be very large, and the wire would melt; I've seen it happen a few times when my students accidentally short-circuit the source in my Circuits Lab class.

The problem here lies with the assumption that the resistance of the battery, wire and switch are negligible. There are two solutions that I can think of:

1) Because the two branches are connected in parallel, the branch with the resistor will still have $I_R=\frac RV$ current through it while the switch $S_1$ will have "infinite" current going through it as the voltage is still set to $V$ (that is because the switch's resistance is zero, which is unrealistic and therefore poses a problem).

2) The battery has an internal resistance of $r$, therefore the current through the wire when the switch is open will be $I_{AB}=\frac rV$, but all of the $60V$ will be dropped upon the battery itself, and the voltage drop on the wire will be 0.

The solution is very simple.

[EDIT: My diagram is almost similar to yours, just without the internal resistance r. I have talked about r in the last few lines. Anyway my diagram totally logical and valid for your problem.]

See, your circuit sums up as follows: 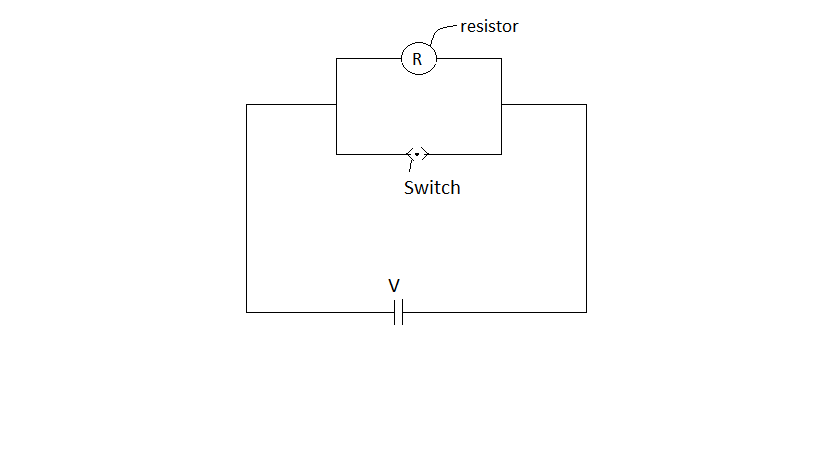 Now since the switch is open, you can consider that the lower branch of the circuit has been detached and taken away by someone.

(This consideration comes from the viewpoint that an open branch of an electrical circuit has an infinite resistance as it has to cross the intervening medium "air" between the open ends of the switch and air is a very very good insulator of electricity.) 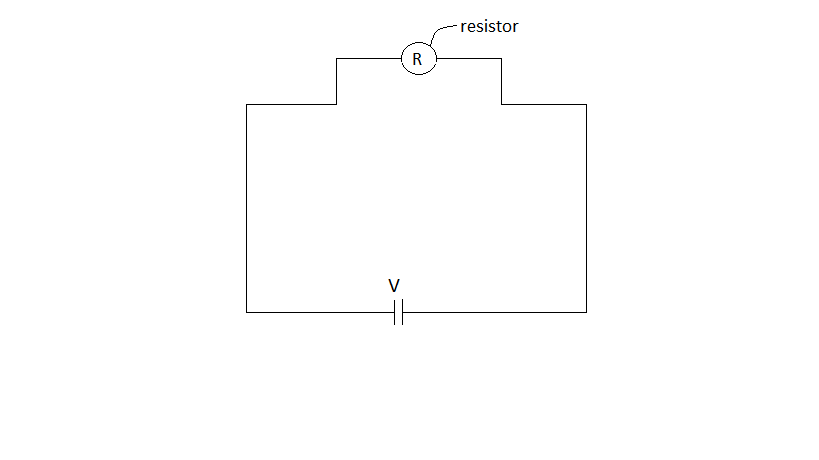 Hence the entire potential difference builds up on the resistor...that is , $60\,\mathrm{V}$ builds up across AB.

However since your diagram shows that the battery has some internal resistance, then obviously the answer won't be $60\,\mathrm{V}$. It would be less. The value of $V$ across AB will be $(60-Ir)\,\mathrm{V}$ .

10
Why is the voltage drop across an ideal wire zero?
2
The Difference Between voltage and current
0
Applying the Symmetry of DC Circuits
0
The separation between the two plates of a capacitor is increased
5
Can Kirchhoff's Voltage Law be applied here?
0
How is current affected by a charging capacitor in parallel to a resistor?
2
Internal resistance and Instantaneous current?
1
Change In the Energy Stored in a Capacitor
44
Birds on a wire (again) - how is it that birds feel no current? They are just making a parallel circuit, no?