Do any substances have the same density when solid and liquid?

I know that as you heat something it expands, but this is proportional to the change in temperature, so if I compare the density of a liquid right before freezing and right after then the thermal expansion would have a small effect.

However, when a material changes state the density can change rapidly. I know water gets less dense as it freezes, and I remember this is not typically the case, but do any substances have approximately the same density in both liquid and solid states?

Not really, because the density varies already through thermal expansion.

But as there actually isn't any universal and exact definition for the difference of solid vs. liquid, you might consider that Carbon $C$ and Helium $He$ as such a substances. This thought can be reasoned from their abnormal triple points. For Carbon there practically isn't a liquid form, and for Helium there isn't solid form. (which is stable in low pressure)

The Mineral stability diagram (P-T diagram) of the system C (= Carbon) looks like this; 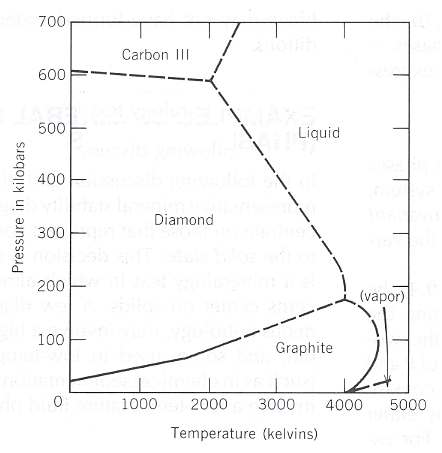 This study from 2015 summarizes this problematic quite good.

And the P-T diagram for HE-4 to comparison.

Another approach to the issue can be made through Bingham-plastic materials, which are either solid or liquid depending on the shear stress. This short of concludes, that the whole question is a problem in classical physics, because the modern physics hasn't just defined this question yet.

I have personally made some attempt to answer this question, and to define the phase transitions from the speed of light. This hypothesis found also support from observations.

Not the answer you're looking for? Browse other questions tagged thermodynamics phase-transition density states-of-matter phase-diagram or ask your own question.

9
Why does frozen water burst a pipe?
4
Density of Solid States of Compounds
2
Are there alternatives to steam in thermal power stations?
21
Does any substance melt or evaporate when cooled at constant pressure?
1
Melting point vs pressure
0
What happens to water cooling at constant volume but above freezing?
27
Material which becomes less dense as pressure is applied