Can insulators/ dielectrics be considered as non-ohmic conductors ? As they apparently breakdown when sufficiently large potential differences are applied across them.

Ohm's Law is an idealization. No material follows it exactly, even for small applied voltages. But if your voltage is small enough, the deviation from Ohm's Law will be so small as to be unmeasurable ... but it's still there.

What we usually mean in Ohm's Law is that the behavior is linear for the purpose of whatever the application is. Once we have enough deviation that our application is affected, then we say it's non-ohmic.

So there's no answer to your question. It depends on the application and the sensitivity of your equipment, and your tolerance to non-linearity. For example, if you apply 1,000,000 volts to a small piece of plastic you will say that the material is non-ohmic. But if your equipment (and what you care about) is limited to 1 V, you'd probably say that it's ohmic.

There are two related questions I answered: Does perfect insulation exist and Graph of Electrical Resistivity of Air vs Air Pressure

The crux of it is, that everything will conduct eventually, even nothing (look at the first link).

As the other answers have stated, all materials are non-Ohmic to some degree. The main point of this answer is to elaborate some details and state one case of "severe non-Ohmicness", where the $I$-$V$-dependence is non-analytic around $V = 0$: The Zener current.

Typical insulators are band insulators, which means they have a filled band and a band gap to the next higher band. When we turn on the oven (i.e. consider the material at non-zero temperature) particle-hole-pairs will be excited which carry the current. As the band gap is usually much larger ($\approx 1\,\mathrm{eV}$) than room temperature ($25\,\mathrm{meV}$), the number of particle-hole-pairs is small, and so they conduct badly (because there are few current carriers). The distinction semiconductor/insulator is not a sharp one, but just an arbitrary quantitative distinction. (For simplicity we ignore complicated insulators based on many-body effects such as Mott insulators).

But there is one exception: If the temperature is very low (compared to the bandgap) another, non-Ohmic effect dominates: Zener tunnelling. Here, the electric field induces tunnelling from the valence band into the conduction band. Typical for tunnelling effects it has a non-perturbative $e^{-1/V}$-dependency, so it can in no limit be described as Ohmic.

So as long as your temperature is sufficiently high and your voltage sufficiently low (compared to the bandgap) your typical insulator will be an Ohmic conductor.

On breakdown, many materials will be damaged/transformed non-reversible, so the term "non-Ohmic insulator" might not be the best choice for that scenario.

Actually, all materials(non conducting) in this universe can be considered as non-ohmic conductors because on applying certain voltage, they break down because of the breakage of bonds in the lattice. But perfect insulators, unlike resistors, don't allow current to flow through them at all until this voltage is attained. Their V-I graph is as follows: 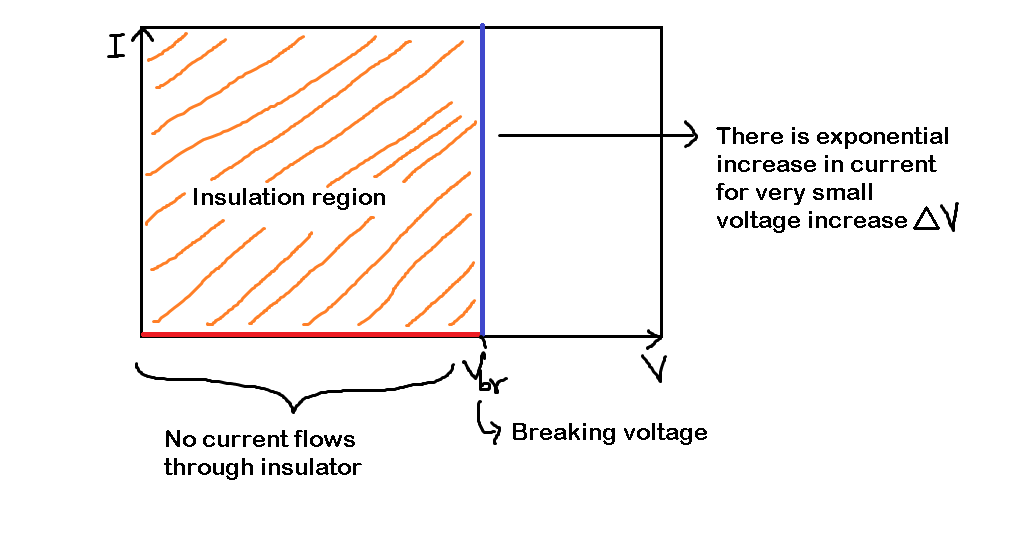 Actually, after breaking voltage, materials produce very large amounts of current because of availability of excess amounts of electrons due to breakage of bonds (that is how breaking voltage gets its name). The same goes for dielectrics but they tend to breakdown at a much lower voltage than insulators.

Not the answer you're looking for? Browse other questions tagged electric-current dielectric conductors insulators or ask your own question.

6
Graph of Electrical Resistivity of Air vs Air Pressure