On the wikipedia page for Hawking Radiation it states:

Physical insight into the process may be gained by imagining that particle-antiparticle radiation is emitted from just beyond the event horizon. This radiation does not come directly from the black hole itself, but rather is a result of virtual particles being "boosted" by the black hole's gravitation into becoming real particles.

Perhaps the most direct example in particle physics is $J/\Psi$ (or any other meson not including up and down quarks) production.

The meson has a valence content of $c\bar{c}$, so it represent a pair of particles knocked on-shell from the nucleon sea.

The reaction is not exactly analogous because it requires a rather large input of kinetic energy (as does the electromagnetic pair production reaction ($\gamma \longrightarrow e^+ + e^-$) I showed in a comment now deleted.

As far as I understand it, something about the intensely strong gravitational field around a black hole gives the virtual particles enough energy to be 'boosted' into real particles, hence we can then observe Hawking Radiation.

Hawking radiation is a semiclassical prediction. As such the effects of gravity are given through the curvature of spacetime, which means you have a series of local inertial frames.

And so the energy a distant (i.e. different) frame assigns to something can be different than what the local frame assigns to it. That's already present at the classical level. And keep in mind that energy is not conserved in general relativity, partly because the local frames make it so there isn't an obvious global energy and partly because the stress energy tensor generally has a zero covariant divergence but in general does not have a zero divergence.

But this lack of global frames also means there is no obvious quantum vacuum that everyone agrees would be the vacuum. So it leads to some ambiguities.

Being unclear about what is the vacuum is a natural way to see particles. For instance if you accelerate a particle detector it might fire more than one going at a constant velocity. However if you adjust the state, maybe the constant velocity one fires and the accelerating one won't. They disagree about which state is the vacuum. And this is the Unruh effect (also just a prediction as far as I know).

But the point is that this semiclassical effect really has a bunch of different local frames and a corresponding lack of agreement on which states are the vacuum. And you try to extract predictions from it in a way that don't require a full quantum gravity and sometimes you get something (a usable result, a prediction) and sometimes you don't (i.e. you find that that question requires a full quantum gravity).

But this isn't just a quantum field theory, and it isn't just classical general relativity. And it only gives answers to some questions and does so entirely in an approximate way, though sometimes symmetry can make it clearer that no other result is really consistent with what we know, so that would be the gold standard of semi classical physics.

But can the virtual particles be 'boosted' into real particles by other fields, such as an intensely strong electric field?

Do keep in mind that a sufficiently strong electric field will itself curve spacetime and hence would lead to the semiclassical physics we are talking about.

And if so, how strong would the electric field have to be?

I don't want you to think this is overly simplistic. For instance, classically, you can have a a finite amount of mass in an infinitely small amount of space without forming a black hole. A piece of a perfectly thin spherical shell of matter takes up zero volume but if the surface area of the entire shell is large enough no black hole forms and outside it could even just look like normal earth gravity, so nothing special. The time dilation of a black hole or a near black hole is a relative thing about a local inertial frame far from the object and one nearby. It isn't about magic densities, effectively more things look nearby to each other when you move farther out so you average more things together when you think about the density, so locally the density might be infinite if it is an infinitely thin shell but far away it might have the density of the earth when you average over the whole collection.

So it is not the case that there are magic densities and when they get exceeded interesting things happen. That is an oversimplification that is sometimes sold to people. Thus we can't just compute such things. If you had a shell of positive charge and a larger shell of negative charge outside it concentrically there would be no field except in between them however there would be mass energy on the two shells as well of electric field energy between them. I'm not sure how/if you would distinguish the effects of the two. Particularly since classically if you let them go they would come together and outside nothing actually would look different, there would be the same fields outside and the same curvature outside, I guess if you are picky there would be more outside if they came closer together and more flat spacetime inside. But then when you tried semiclassical again there would not be a global frame and thus no obvious vacuum.

I'm sorry I couldn't answer this better than warning you about over simplifying to the point where you think there is magic densities. And an electric field isn't going to appear out of nowhere, and it will have gravitational effects.

This answer is at the level of first year college physics.

Two concepts have to be cleared up here: "virtual particle" and "particle antiparticle virtual loops" .

We read it as follows: an electron emits a real photon at the round vertex and becomes a virtual electron, and meets the incoming positron, the quantum numbers,lepton, are equal and opposite and they annihilate into the second real photon . The schematic has a very strict mathematical interpretation, one to one with constants and integrals over the variables, and is used in calculating the probability of an electron annihilating on a positron and vice versa.

The "virtual" electron/particle carries all the quantum numbers of an electron but not the mass, it is off mass shell, because it represents an integral over a propagator function with the energies entering variable within the limits of integration. 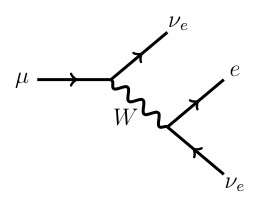 Note the virtual W which when real has a mass 80.4 GeV, the muon has a mass of 105.6MeV. The W is very off mass shell in this decay for energy conservation to work on vertices.

The particle antiparticle virtual loops are a mathematical concept coming from the calculations and representing the ground state of the vacuum. It is also connected with the Heisenberg uncertainty principle,

This is what is used in the Hawking radiation arguments, where the virtual loop at the event horizon has one particle interacting with the gravitational field and energy is supplied by it so that the other becomes real and exits as real.

With the above background it is evident that virtual particles turn into real when they acquire mass and keep their quantum numbers:

The photon hitting an electron and exchanging a virtual electron with the field of some atom (through a virtual photon or Z) creates a pair by the electron becoming real.

A real photon cannot hit a vacuum loop and generate particles: because of momentum conservation two particles have to become real and they will have a rest mass system, whereas the gamma does not have one, in all systems it travels with c velocity.

It is not the intensity of the electric field that will be the problem, but the fact that virtual loops are higher order corrections, which means that the electromagnetic coupling constant enters with high exponents in these loops, and the probability will be very small. In a sense the last diagram is a previous virtual loop that became real .

No. That's a fairy tale for kids. See anna's answer to this question about virtual particles. Virtual particles exist only in the mathematics of the model. They are abstract things, not something that can be boosted into reality.

by fields other than gravity?

We have no actual evidence for Hawking radiation. It remains hypothetical. And we have no evidence for anything like it associated with other fields. In pair production a gamma photon of more than 1022keV is effectively "split" over a nucleon and converted into a 511keV electron and a 511keV positron. This is because the nucleon field is pretty fierce. But when there's no incoming gamma photon, we just don't see electrons and positrons popping into existence like magic. Even though the fields we're dealing with in particle physics are much much stronger than gravity

On the wikipedia page for Hawking Radiation it states: "Physical insight into the process may be gained by imagining that particle-antiparticle radiation is emitted from just beyond the event horizon. This radiation does not come directly from the black hole itself, but rather is a result of virtual particles being "boosted" by the black hole's gravitation into becoming real particles".

It's a fairy tale for kids. See this physicsworld article: "There is just one tiny problem with all this – there is currently little experimental evidence to back up M-theory. In other words, a leading scientist is making a sweeping public statement on the existence of God based on his faith in an unsubstantiated theory". Hawking makes a habit of this sort of thing. Nothing he's done is substantiated, and he's not as popular with professional physicists as you might think.

As far as I understand it, something about the intensely strong gravitational field around a black hole

That "intensely strong" gravitational field is incredibly weak compared to other fields.

gives the virtual particles enough energy to be 'boosted' into real particles, hence we can then observe Hawking Radiation.

Sorry, but Virtual particles only exist in the mathematics, and we've never ever observed Hawking radiation.

But can the virtual particles be 'boosted' into real particles by other fields, such as an intensely strong electric field?

Not the answer you're looking for? Browse other questions tagged gravity hawking-radiation virtual-particles or ask your own question.