What causes this pattern of sunlight reflected off a table leg? 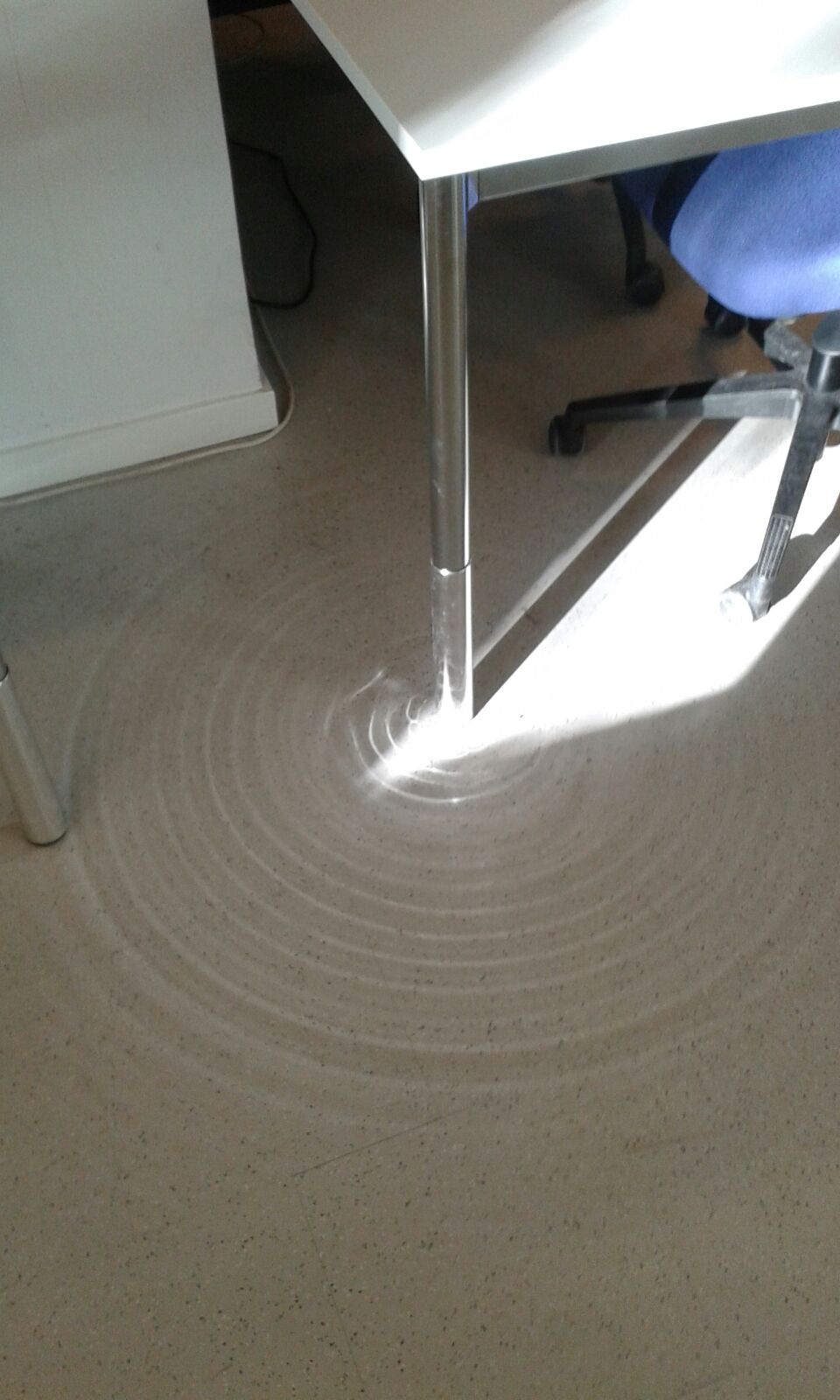 My friend noticed an interference-like pattern around the table leg. However, we do know that interference patterns of sunlight produces rainbow colours. What seems to be happening here?

This is a grossly exaggerated illustration of a strictly cylindrical metal tube compared to a cylindrical tube with external diameter variations, like the one you have in your case:

Because of those diameter variations, the reflected light can vary between scattering and concentrating on the surfaces it is reflected onto.

These are because the leg isn't exactly cylindrical. Here's a way to think about it (slightly different but the gist is there)

Imagine you have some pastry being squeezed through one (or two) rollers.

The pastry resists and builds up behind the rollers UNTIL enough of the pastry is touching the roller's surface that friction drags the pastry under, thus we go from thick to thin.

There are many ways to make tubes, most of which involve rolling a sheet thinner and thinner, it is the same principle.

Metal sheets have wavelengths like this, as does playdough, pastry (obviously!) but also interestingly enough so does paper.

Anything forced through rollers will build up on one side until friction drags it through and the connective forces inside the material "pull" some through.

I wish I could make gifs.

Picture may help (will add more later, really busy, if anyone else knows an image or a gif please do edit)

I'm not convinced that variations in thickness are the cause. Variations in gloss (areas of specular reflection and areas of diffuse reflection) seem more likely: the "distribution requirements" are the same (in both cases the "defect" has to repeat at about equal distances), but the "thickness" hypothesis also requires that the curvature of the sections changes with height (because the focal length has to be proportional to the radius of the circles we see).

Edit: It looks like concentric circles, but a single spiral would look the same. A regular helix pattern of increased specularity would produce such an image. And a regular helix pattern is exactly what one can expect from the polishing process, in which pipes are rotated while they move along the grinding/polishing wheel or belt. While the process can be tuned to minimize them, periodic variations are an essential feature of that process: the center of the grinding/polishing wheel or belt moves in a helix over the surface of the pipe.

Such a helix of higher specularity will produce a regular spiral image regardless of the width and the spacing, or the position of the sun.

Not the answer you're looking for? Browse other questions tagged optics everyday-life reflection home-experiment interference or ask your own question.

5
Laser, wire, and a circle of light

30
Is coherent light required for interference in Young's double slit experiment?
4
Interference and windows
29
Why does light reflected from an LED TV screen make a sharp X pattern?
5
Explanation for possible interference on a home mirror?
1
Why do polaroid lenses reveal rainbow patterns on some surfaces?
6
How can a double slit interference pattern be created without out going through a double slit
1
Three patterns on DVD grating
0
How does a rainbow show all of its colours?