The Einstein–de Haas effect, if I understand it correctly, demonstrates a deep relationship between the intrinsic angular momentum (spin) and the magnetic moment of a particle; For this reason when a cylindrical ferromagnetic material is placed in a external magnetic field, it will begin to spin because enough angular momentum was localized in the cylinder to measure a macroscopic spin; but this is only possible because enough the magnetic dipole moments in the cylinder were aligned due to the external field. This makes sense and its very intuitive but my question is this: if we removed the cylinder entirely and constructed the coil with ferromagnetic material would the coil begin to spin or are there fundamental laws which require that the necessary fields to do so are canceled, making the spin of the coil impossible? 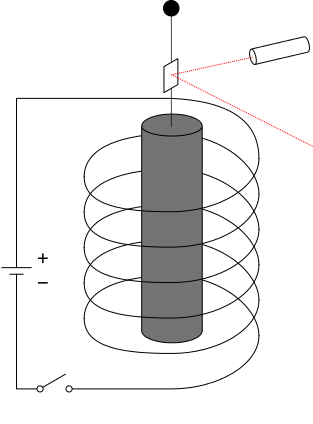 Almost. Whereas I guess the E-de-H effect does require the magnetic moment to be along the spin direction, what the effect is really used to show is that an electron spin flip imparts $\hbar$ of macroscopic angular momentum to the cylinder. Just because we know that the electron is a two state object transforming under rotation by the s=1/2 representation (ie: 2x2 matrix) of SU(2), does not mean that we know that the expectation values of the dimensionless rotation generators are equal to mechanical angular momentum divided by $\hbar$.

The Einstein–de Haas effect, if I understand it correctly, demonstrates a deep relationship between the intrinsic angular momentum (spin) and the magnetic moment of a particle.

Yes. The Einstein-de Haas effect demonstrates that "spin angular momentum is indeed of the same nature as the angular momentum of rotating bodies as conceived in classical mechanics". Some people will tell you that electron spin is in no way classical and is spooky quantum magick, but this 100-year-old experiment suggests otherwise.

The important thing to appreciate is that a bar magnet is rather like a solenoid because they both feature electrons going round and round. You can magnetize an iron bar by putting it inside a solenoid. Inside a solenoid the magnetic field is (fairly) uniform, so electrons move like this: 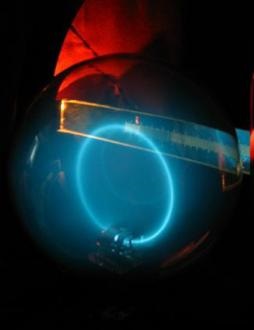 They end up moving like that in the iron bar too, then you've got yourself a bar magnet. The bar magnet's magnetic field is like the solenoid's magnetic field. These field are dipole fields, and interestingly the electron itself has a field like that. See electron magnetic moment on Wikipedia:

"The electron is a charged particle of charge (−1e), where e is the unit of elementary charge. Its angular momentum comes from two types of rotation: spin and orbital motion. From classical electrodynamics, a rotating electrically charged body creates a magnetic dipole with magnetic poles of equal magnitude but opposite polarity. This analogy holds as an electron indeed behaves like a tiny bar magnet. One consequence is that an external magnetic field exerts a torque on the electron magnetic moment depending on its orientation with respect to the field."

And of course if you put a little bar magnet inside a solenoid, it lines up with the magnetic field. Hence a compass needle points North. So the electron intrinsic spins line up too. Reverse the current in your solenoid electromagnet, and the "compass needles" swing round and point the other way.

If we removed the cylinder entirely and constructed the coil with ferromagnetic material would the coil begin to spin?

Darn it, I don't actually know. The proof of this is in the pudding, in the actual experiment, and I can't find a reference. But I think the answer is yes, see for example this where the galvanometer coil gets an angular impulse. I'm thinking your ferromagnetic coil would only begin to spin when you turn the current on. It jerks round a bit. It doesn't keep spinning. Then when you turn the current off it jerks back round to its original position. You can see something like this occurring when you turn a wall-mounted hose reel on and off. But I'm not sure whether this counts as the Einstein-de Haas effect.

Not the answer you're looking for? Browse other questions tagged quantum-spin magnetic-moment or ask your own question.

3
If we know spin isn't actually rotation, why do we still speak of intrinsic angular momentum?
6
Do the magnetic moments of neutrons mutually align to produce the magnetic field and emission beams of a pulsar and/or magnetar?