I'm currently reading "Models for phase separation and their mathematics" by Paul C. Fife and there is a paragraph which I don't understand because I lack the necessary background in physics/chemistry/material science.

Why is that true? Why can't the two phases principally be in contact and equilibrium at various concentrations?

@FasEtNefas presents us with this quote:

Now suppose a uniform binary mixture [e.g. a CuCr metal alloy] at a high temperature and concentration u∗ is suddenly quenced to a given lower temperature. A commonly occuring situation is that there is a pair of values of u [which is the local concentration of one of the components], say u1 and u2, and a pair of solid phases, denoted by I and II, say, such that the two phases can be in equilibrium and in physical contact only if the former has concentration u1 and the latter has concentration u2.

Let me rephrase the above statement.

Consider a uniform binary solid mixture (eg, a FeNi metal alloy) of a specified concentration u*(ie, Ni/Fe ratio). Commonly, for that u*, when cooled quickly enough to quench (at temperature Tq), there will exist two (and usually no more than two) possible solid phases I and II with concentration values u₁ and u₂, such that they are in equilibrium while in contact with each other.

The phrases in ()'s are my own commentary.

@Gert, in his answer, raises the concern:

When two solids are in contact, no mass transfer can occur between them, in other words even if equilibrium was not previously achieved (such as is the case for quenching) it's meaningless to claim 'the two phases can be in equilibrium'.

Actually it is meaningful. Equilibrium is a state, not a process. A set of phases, mixtures, gases, liquids, even plasmas, is in equilibrium if, as a whole, the system is at it's lowest possible Gibb's Free Energy. At most possible pairs of concentrations in putative phases I and II, this will not be true, so if they are in contact, there will be transport of atoms across boundaries, even if it takes millions of years (see Widmanstätten pattern in Iron-Nickle meteorites).

Generally, when a hot alloy is quenched, there will be either the same single phase with the original concentration u*, or two phases of different concentrations, rarely 3 or more.

When it is two or more phases, there will be only one possible set of concentrations that meet the Gibb's free energy requirement. Since the weighted average of the concentrations in phases I and II (and possibly III) must equal the original concentration u*, the amount of each phase present has only one set of values possible at equilibrium.

Consider this phase diagram pertaining to the Earth's mantle:

Have a look at the following idealised binary phase diagram: 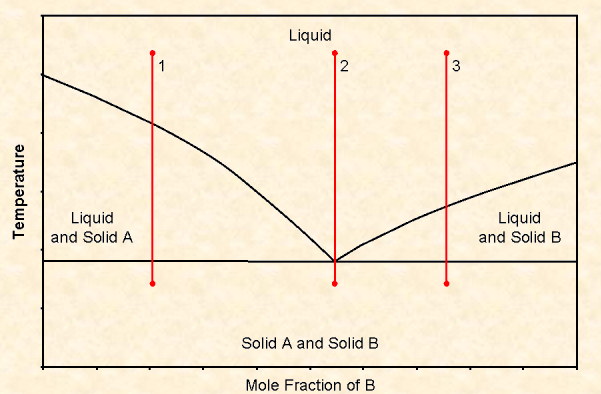 The vertical axis is temperature, the horizontal is composition (in mole fraction but weight % would work too here).

Say we started from point 1. where the alloy is fully liquid with a well defined composition, say $u$. Now we cool down, following the red line. At some point we hit the black liquid-solid line. The composition of the melt versus temperature now follows the liquid-solid line, so that we now have two compositions $u_l$ and $u_s$ that keep changing, until we reach the horizontal black line, where everything is solid.

The diagram is idealised because it assumes that the solubility of A in solid B is zero and the solubility of B in solid A is zero: the solid phase is therefore made of crystals of A and B in a ratio that respects the original composition $u$.

However, your question concerns quenching (very fast cooling) during which equilibrium conditions as described by the diagram are not achieved and two solid phases are obtained which will both contain some A and some B. To achieve equilibrium at each point of the solidification takes time and quenching 'bottlenecks' that time because it's a very fast process.

I have to add that I found the following phrase rather strange:

When two solids are in contact, no mass transfer can occur between them, in other words even if equilibrium was not previously achieved (such as is the case for quenching) it's meaningless to claim 'the two phases can be in equilibrium'.

Not the answer you're looking for? Browse other questions tagged thermodynamics material-science physical-chemistry phase-transition phase-diagram or ask your own question.

3
Does the second law of thermodynamics tell me how the entropy changes?
1
Slicing a surface concentration from a volumetric number concentration
0
Can condensation occur in a unsaturated vapor?
1
the equilibrium concentration of vacancies
1
What would happen if a gas mixture is cooled to a temperature between the individual boiling points of the constituent gases?
5
Meaning of the term “phase” in chemistry and thermodynamics
1
Overconstrained equilibrium binary mixture phase seggregation
1
The general 'driving force' behind attainment of thermal equilibrium and dynamic chemical equilibrium