Is there a rigorous definition of 'much greater than'?

I have encountered $\gg$ in many physics text books where it's used as a relation between constants or functions but in none of the text books I have read is it properly defined anywhere.

Note: I'm asking this here because mathematicians don't use the much greater than relation. At least not that I know of.

There is a consistent definition, but it involves a couple of arbitrary thresholds, so I doubt you'd consider it rigorous. The construction $X \gg Y$ means that the ratio $\frac{Y}{X}$ is small enough that subleading terms in the series expansion for $f\bigl(\frac{Y}{X}\bigr) - f(0)$ can be neglected, where $f$ is some relevant function involved in the calculation. This depends on what you mean by "can be neglected", of course; typically that will be determined by the uncertainties of your data or your theoretical parameters.

Technically it depends on $f$, too, but the functions we use in physics normally have power series with coefficients that are close to 1, or within a couple orders of magnitude at least. As long as the coefficients don't grow exponentially (by which I mean $f_n \approx f_0 k^n$ for some $k$), they don't have much of an effect on which terms in the series are negligible. 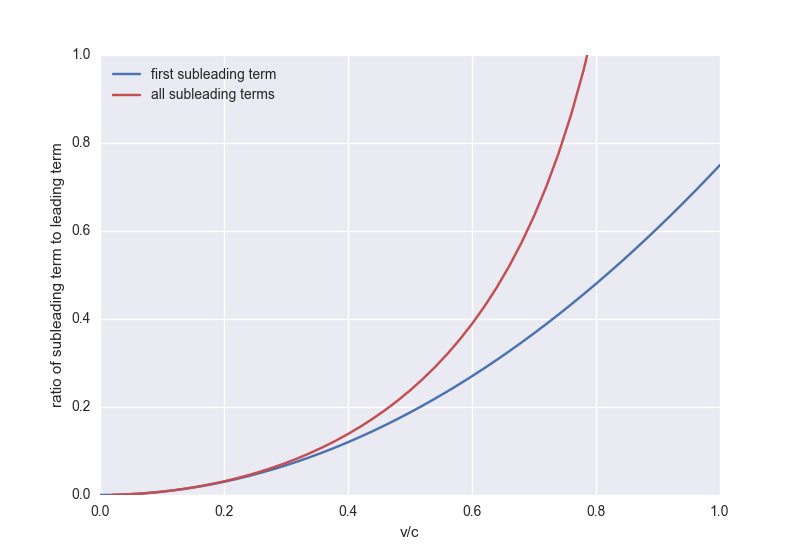 Here is where the most obvious ambiguity comes in: where do you draw the line? Interestingly enough there can be an actual line: you draw a horizontal line across the plot at whatever level you're comfortable considering "negligible", and where that crosses the curve, that tells you what value of $v$ sufficiently satisfies $v \ll c$. The value depends on your requirements, of course, but you can see that for $v \lesssim 0.1c$, the curves are nearly indistinguishable from the bottom of the plot. So it's very common to consider $v \ll c$ satisfied when $v \lesssim 0.1c$.

For example, we could say that general relativity is ignorable for putting a man on the moon, but not for running a GPS system. The more specific takeaway is to learn that there's no such thing as an exact number in physics. It's always $A\pm err$

I think the answer is no. It generally precedes some approximation method with a bounded error, but there are so many approximations methods in physics -- some rigorous, some nonrigorous -- that it's way too presumptuous to give it a rigorous definition.

Generally, it means one of several things:

That's it. I don't think you can say anything more about it.

Expanding in parameters of a small parameter is rigorous and well defined, and usually gives you an upper bound on the error, but this is not always what is done. Let me give you an example where the actual mathematical "real analysis" details would be difficult to work out. This example is an example where you have no clue what "sufficiently large" means until you finish the problem.

Consider the equation $f''(x)+A^2 f(x)+A f'(x)^2=0$. I know it's contrived, but you can really end up with nasty equations like this one. Note also that the units are consistent if $f$ is in meters, $x$ is in meters, and $A$ is in inverse meters. $f$ could be lots of different things, but the reasoning in many approximation methods is as follows: Say $f(x)$ changes significantly (doubles/halves/what-have-you) only on length scales of order $L$. Then you might expect differentiating to have the effect of dividing by $L$. Then the magnitude of the terms should be like $L^{-2} f(x)+A^2 f(x)+ L^{-2} A f(x)^2$. Suppose $L\ll f(x)$ and $f(x)\ll A$. Well, I don't see any method to prove that terms in here can be neglected, so I'm going to assume the third term can be neglected. Then the remaining ODE is just a sinusoid with a certain small magnitude, maybe $f(x)=\frac{k}{A} \sin(A x)$. Let's check if the assumption is valid by plugging everything back into the ODE:

So, the assumption is good if $A k^2$ is small enough, but what is small enough? We can't say "$A k^2\ll 1$" because then the units wouldn't be consistent, but we know it has to be close enough to zero for us to not care about it.

On that matter, what could $L\ll f(x)$ mean? $\frac{L}{f(x)}$ diverges to infinity periodically, so it isn't even less than one! And I had to assume neglecting something would work in the first place. Plus, what if the ODE has some problem where there's feedback from the nonlinear term we neglected? Then the solution blows up and the whole thing is crap!

There are lots of things you could do to fix all these problems, but my point is: Approximations are an art, and in practice with things like this, the process of solving your problem is sloppy and nonrigorous, but with some luck you can go back later and patch up all of the mathematical holes in your argument. If I wanted to get a real mathematical result out of this, I might start with "Assume $f(x)=\frac{k}{A}\sin(A x)$. Then $|f''(x)+A^2 f(x)+A f'(x)^2| \lt \varepsilon$ for all $x$, where [some relationship between $k$ and $\varepsilon$]." All the approximations I did to get to the formula for $f(x)$ were nonrigorous and severely need to be patched up!

Given $A \ll B$, a certain property $P$ holds - not approximately or as a limit, but exactly. This is then the opposite to that $P$ would be true for $\gtrsim$ or $\gtrapprox$ (depending on style). I don't remember specifific cases, but I've seen the latter in studies of dynamic systems, chaos etc.

30
Is the Big Bang defined as before or after Inflation?
5
Why is the specific notation used for term symbols useful?
3
How do you quantify the “much greater” operator “$\gg$”?
1
Questions about the formalism of Quantum Mechanics
16
Is the Momentum Operator a Postulate?
1
Rigorous definition of “Thermodynamic path”
2
How much bigger is $a$ than $b$ when we write $a \gg b$?