How would a black hole power plant work?

A black hole power plant (BHPP) is something I'll define here as a machine that uses a black hole to convert mass into energy for useful work. As such, it constitutes the 3rd kind of matter-energy power (formerly "nuclear power") humans have entertained, the first two being fission and fusion. Putting aside the fact that the level of technological advancement needed for this is far beyond modern day humans, it seems to be pretty well established that this is possible (and maybe someday inevitable) among physicists. Personally, I feel like I don't understand the proposal because no one has really created a coherent picture of how it would work. To keep this focused, here are my objective questions:

Related to the conversion itself:

Sorry I couldn't wrap this up into a single question. I tried. To address the "on topic" concern, I hear people mention that tokomak fusion power research still has many unknowns that are in the domain of physics, as opposed to engineering, which will come later in its development. I tried to edit my question above to be actually physics in nature. I think I speak for most people when I say that I don't understand the vast majority of the physics of BHs. My question here is generally how those physics would play out in a machine that does useful matter to energy conversion.

I don't know about extracting mass-energy from inside the black hole; it seems pretty inefficient to me. Hawking radiation isn't that powerful (as well as still being highly hypothetical), but building a Dyson sphere around a star is better. Remember, black holes, are, well, black. If there was enough Hawking radiation, they would cease to be black and would shine like stars.

The efficient way to extract energy from a black hole is to extract its rotational energy. 20% 1 of a (rotating) black hole's mass-energy is in the form of rotational energy. This energy is not stored inside the black hole, rather it is stored in the swirl of space outside the black hole (in the Ergosphere). We can extract this energy by threading magnetic filled lines through the black hole. The swirl of space swirls the magnetic fields, and this swirl creates current (I'm not sure of the exact treatment of this, classically it would be some form of electromagnetic induction, but this isn't classical physics.). The current flows along the field lines and can be picked up.

Here's a picture from 1: 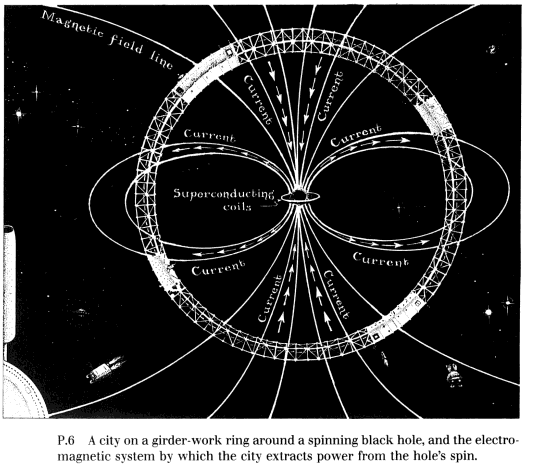 With this answer, I am going to list some of my notes from the paper that @zephyr posted as a comment, http://arxiv.org/abs/0908.1803v1. Using Hawking radiation as a means of mass-to-energy conversion seems, in a word, absurd. The paper, however, addressed exactly that for use in powering a manned spaceship to the stars.

Hawking Radiation as a thrust source

Firstly, let me list the parameters of the BH discussed in the paper:

Such a spaceship, by the way, is an extraordinarily energy-intensive activity. A major fraction of the mass of any such spaceship would necessarily have to be converted to energy for the idea to be workable. Thus, it is necessary for the trust device to have very high mass-to-energy conversion efficiency for this process. This is among the reasons that Hawking radiation may be the only viable options for certain trips.

When thinking about designing a spaceship, our considerations go beyond the craft itself. Earth-bound or solar-bound activities will be needed to build it and prepare the energy source. The paper compares Hawking radiation to an antimatter rocket. It makes the general claim that theorists don't predict the antimatter production efficiency to exceed $10^4$ energy input to mass created. Now, all of the mass of the antimatter will be converted to photon propellent in-service in the spaceship. The efficiency quantification for an artificial black hole is a little more complicated. So I made a picture.

Basically, you throw together some amount of mass so that it compresses tighter than its event horizon and you have a black hole. Obviously, this would be a very energetic process to do, so we have to include the kinetic energy used to throw this matter together to an extremely small point. As you're using it, though, you can add as much mass as you want to the BH with relative ease because once it's in the event horizon, it has added to the mass. Hawking radiation will be emitted continuously (whether you want it to or not), and at the end of the trip you'll be left with some mass as a BH that you didn't use. This is important to include for a spaceship because for a spaceship the matter-energy to energy conversion matters. For civilian power, generally the energy to energy conversion matters. I defined the matter-to-energy conversion above, but the energy-to-energy efficiency would be:

The other major reason for looking at Hawking radiation from artificial black holes is that they have very good confinement. Using anti-matter would require actively confining the antimatter, for which the prospects do not look good. Should the active confinement methods fail, there will be a spectacular explosion that destroys the spacecraft and the local cosmic neighborhood. A BH, on the other hand, is passively confined by gravity. If left to sit for long enough, yes, it can evaporate and destroy just as much, but that will take time to happen.

Firstly, in order to get the power level needed, the BH would have to be "subatomic black hole" (SBH), with a radius less than $10^{-10} m$. Apparently, we don't know exactly how much power a given mass SBH would emit, that requires basically quantum gravity physics models, and those are not completely decided upon.

Also, apparently, such a SBH would emit some of its mass as mass, not energy. This means that mass would not be converted to thrust for a spacecraft and would not be converted to useful energy in a civilian power plant type application. Also, neutrinos would be created and emitted isotropically, contributing nothing to either thrust or useful energy.

The temperature of the SBH would be very high apparently, somewhere in the range of $0.06 GeV$ and $100 GeV$ for the parameters the paper discussed. These energies will have a large multiplier for calculating material radiation damage. Shielding would also be difficult.

The mass entertained in the paper is $10^{12} kg$, and to create the black hole, this would have to be accelerated/compressed into a subatomic radius. At the risk of sounding snarky, this doesn't sound easy. This is basically saying that if you can compress Mount Everest into the volume of a single atom you can have free energy. One method discussed is to use "converging x-ray lasers" to do this. Apparently self-gravitation may help focus them to a point. So that's one bit of good news.

15
Is there any way to annihilate matter without the use of anti-matter?
7
Translational invariance implying diagonal representation in momentum space
11
How much energy can be extracted by lowering something into a black hole?
8
Blandford-Znajek process: Why/how does the current flow along the magnetic field lines?
-2
Physical -> Chemical -> Nuclear -> (what comes next)