If two discs of equal mass and volume are parallel to each other but not touching, share an axle but using magnetics do not touch it, are not under gravity, and begin to rotate in opposite directions to each other...Assuming the discs are both parallel to the y axis and the axle is along the z axis, does the entire object (discs and axle) begin to also rotate on the x axis?

This isn't a school question - just something I've been wondering about. Something makes me think I've seen a similar situation result in rotation starting on the x axis, but I can't find anything stating as much. Sorry I have no diagrams. Like I said, just a curiosity.

As a followup to Gert's response: Does the answer about what would experience the torque depend solely on what part or parts of the discs the increase in angular speed were applied to or originated in? Or is it simply that any increase, regardless of origin, would start to cause the rotation.?

I've summarised the geometry of your problem in the diagram below: 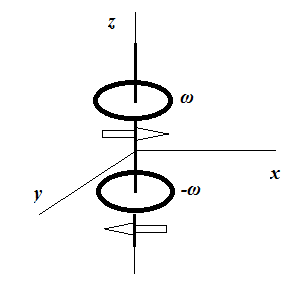 The bottom disc is spinning clockwise, the top one anti-clockwise.

As long as the angular speed $\omega=2\pi f$ (where $f$ is the spinning frequency} of each disc is constant, no net torque acts on the discs. At constant angular speeds there would be no tendency to start rotating around another axis.

But if we wanted increase the angular speed of either disc, a net torque would have to be applied, so that $T=I\dot{\omega}$, with $I$ the inertial moment of the disc and $\dot{\omega}=\frac{d\omega}{dt}$ the angular acceleration.

This torque would be applied to the rim of the disc as schematised below: 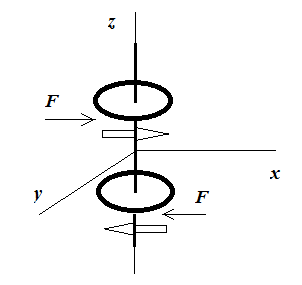 However, both forces $F$ now also cause torque around the mid-point between the two discs. Assume the distance between both discs to be $h$ then the total torque is $T’=2Fh$. If the axel connecting both discs does not provide counter-torque to $T’$ then the ensemble would start rotating around the $y$ axis.

Not the answer you're looking for? Browse other questions tagged forces rotational-dynamics rotation or ask your own question.

5
How do I visualize the non-coaxial rotation of this device?
35
Stability of rotation of a rectangular prism
2
Two-rotation coordinate transformation
0
Newton's Second law of Rotation
3
How does a wheelie work?
0
Understanding work with rotational momentum/moment of inertia
124
Why is the vibration in my wire acting so oddly?
2
The dynamics of a cornering wheel