What's worse, a full frontal impact or an impact at an offset?

Modern car designs have a crumple zone that absorbs most of the impact in a collision, and a strong "safety cell" in the passenger compartment that protects the passengers. These designs are put to the test in crash tests.

Currently there are two ways frontal crash tests are performed, a full-wrap frontal collision against a rigid barrier, and a 40% offset test against a deformable barrier, which simulates a car. The full frontal version of the test is usually conducted at a slightly lower speed. 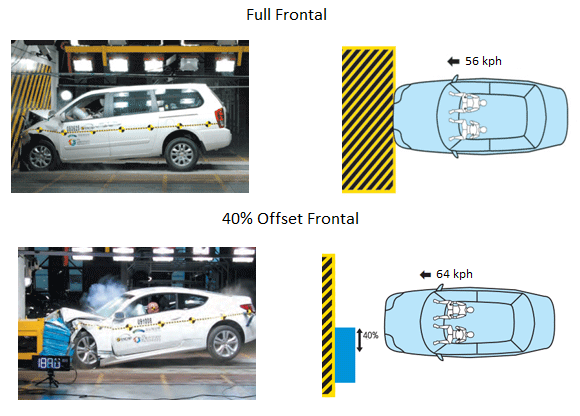 Using the same car, which one of these would result in more injuries to the dummies?

I fully expect the full wrap test to cause more injuries despite the reduce speed, because of a greater deacceleration, resulting in more force applied to the cars and the dummies.

Notice how in the offset test the car doesn't come to a full stop immediately after the collision, it pulls to the side and continues slightly ahead. This, coupled with the fact that the barrier is deformable, gives the car more time and distance to deaccelerate.

However, some argue that in the offset test there's 60% less area in the car to absorb the impact, and thus poses a greater risk to the car's structural integrity. And with that, it's more dangerous to the passengers inside.

Which is true, or are they just not comparable? Are there any papers on this subject?

According to this paper authored by several employees from the Insurance Institute Highway Safety (IIHS), one test isn't better or worse than the other. They are different:

Low scores in offset barrier tests would indicate that the vehicle's front end structures are able to prevent intrusion even when the crash energy is concentrated on only part of the front structure.

On the other hand, crash tests performed by New Car Assessment Programs (NCAP) agencies around the world seem to indicate survivability is slightly worse in full-frontal tests than in offset tests.

An interesting factor however is how vehicle length can impact the scores. There seems to be a stronger correlation between car length and test scores when full frontal tests are performed. 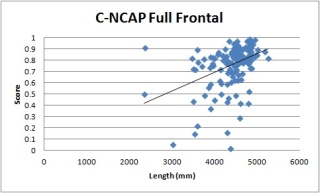 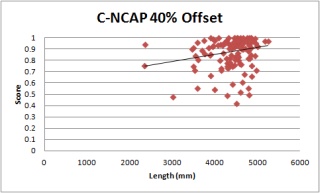 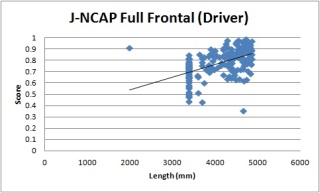 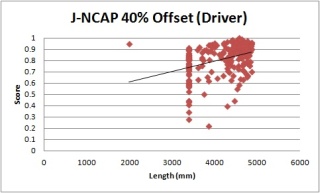 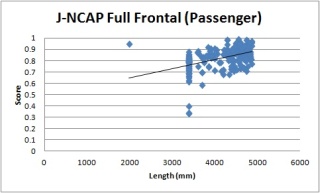 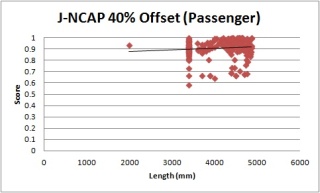 r = 0.455, r = 0.088: unsurprisingly, there's nearly no correlation on the passenger's side since offset tests are done on the driver's side.

Not the answer you're looking for? Browse other questions tagged forces collision or ask your own question.

1
Calculate force of impact on running dog
1
Impact on landing with forward motion vs straight down
0
Energy release on impact
0
Impact Flash? In Vacuum?
2
Projectile coming to a full stop at impact versus breaking through and continuing on
2
What happens when a weapon breaks on impact?
1
Root Density Law equation - maximum impact depth
1
Impact Force Physics