Why would hidden variables in Bell's Stern-Gerlach experiment related to entanglement require only 4/9ths of the measurements to be equal?

Bell's Stern-Gerlach experiment, consisting of 2 sets of detectors each with 3 randomly chosen detection directions, is one of the most important experiments cited as proving that entanglement has strange properties - most often apparent super-luminal communication.

The conclusion that this experiment disproves non-super-luminal hidden variables theories rests on the assumption that if the particles contained hidden variables that determine whether they are measured with spin-up or spin-down, the measurements of spin would be the same (both spin-up or both spin-down) only 4/9ths of the time. Alternatively, entanglement theory expects the measurements to match 50% of the time. This experiment is well explained by this video: https://www.youtube.com/watch?v=ZuvK-od647c .

The math he uses in that video seems incredibly simplistic, and I noticed that if you chose a direction of spin perpendicular to one of the detectors, the measurement of that one detector is essentially useless - there is a 50% chance of it measuring spin-up and 50% of spin-down. See the following picture: 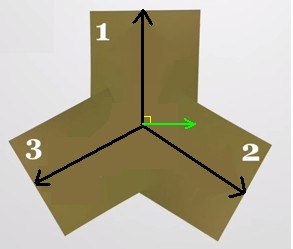 Here, the green arrow represents the particle's direction of spin. Detector 1 would still give either spin-up or spin-down, but for such a particle it essentially gives us no real information - its 50/50. Extending this observation to other directions, the chance of a detector measuring a particle who's spin is pointing straight down (not spin-down, in the diagram, the direction between detector 3 and 2) of being detected as spin-up by detectors 2 and 3 would be only 75%, and the probability of detector 1 measuring spin-down would be 100%.

These numbers calculate that even with hidden variables, the expected probability of the spin measurements being different is still 50% - just as actually seen in the real experimental results. Here's my work:

My question is, under the assumption that many physicists have done a lot more thinking about this than I have and have determined I'm wrong, why am I wrong?

The experiment rests on the assumption that if the particles contained hidden variables that determine whether they are measured with spin-up or spin-down, the measurements of spin would be the same (both spin-up or both spin-down) only 4/9ths of the time.

One example is to have a hidden variable for the configuration and another for a spin state. That's, right have a whole spin state as a hidden variable in addition to position. Then to correctly get a result for a Stern-Gerlach device you ... write down the Schrödinger equation for a Stern-Gerlach device. A beam goes in one side, it widens, it splits, and then meanwhile the spin state changes so that in the beam deflected one way the spin changes to become projected onto one eigenspace and the spin changes to become projected onto another eigenspace for another branch of the original incoming spin and so on. And this isn't the Born rule, this is literally just what the Schrödinger equation predicts happens when you write down the actual experimental conditions of the actual combination of object plus Stern-Gerlach device.

So now we have a wave where the beam is split, and for each branch the beam splits into, the spin for that particle is an eigenstate of the right operator. And the sizes of the beams are sized right so amongst other things repeated measurement of the same type don't split the beam and just deflect it.

And to get the statistical prediction you can either say that one of the split beams is real by having the hidden variable of position be in that branch of the split beam. Or instead, you can have, in addition to the Stern-Gerlach device, you can have and also write down the Schrödinger equation for the whole ensemble and the aggregator and get a wave that is super tiny in regions where the state of the aggregator is not super close to the average predicted by the Born rule, and since devices that observe have to be tolerant to small enough perturbations the other parts actually fail to affect the designed dynamics of the aggregator so you have a clear prediction of having averages close to the Born average for large ensembles whose results are aggregated by a physical device.

You can do better. For a single spin 1/2 particle the spin state literally is an eigenstate of $n_x\hat\sigma_x+n_y\hat\sigma_y+n_z\hat\sigma_z$ for some real unit vector $(n_x,n_y,n_z).$ So it basically the spin state literally is a unit vector (it is a bit more accurate to represent it as a spin plane when you consider nonrelativistic physics as a limit of relativistic physics, but in 3d they are pretty similar).

For a joint multiple particle spin state it isn't just a single vector but the same thing happens, as the beam for that one particle splits. The whole wave in configuration space splits and the joint spin state evolves continuously so that after the beam splits into different branches the joint spin state for each branch is the corresponding projection you'd use for the Born Rule, and again this is simply what the Schrödinger equation predicts as PDE for the continuous evolution.

The math he uses in that video seems incredibly simplistic, and I noticed that if you chose a direction of spin perpendicular to one of the detectors, the measurement of that one detector is essentially useless - there is a 50% chance of it measuring spin-up and 50% of spin-down.

I didn't watch the video, but the math for how the Schrödinger equation predicts that unit vector evolves is pretty simple. And yes, if the spin points in one direction and you setup your Stern-Gerlach device orthogonal to that you beam just splits straight in half so half is deflected one way and becomes spin up and the other half of the beam deflects the opposite way and becomes spin down.

Here, the green arrow represents the particle's direction of spin. Detector 1 would still give either spin-up or spin-down, but for such a particle it essentially gives us no real information - its 50/50.

Again, didn't watch the video. But I know what the Schrödinger equation predicts for the actual experimental setup from start to finish and it does give information. It gives the information about what the spin turned into.

So Stern-Gerlach devices objectively change the spin states of things that aren't eigen to them, and they do give this real information about what they changed it into. But sure, this information was created out of garbage.

It's like if you ask someone to sort your bills into two piles one for paid and one for unpaid. And what if the person on Mondays sorts one to the left and the other on the right. But the different person that comes on Fridays sorts them to the other sides of the desk. They are just as good at their jobs.

But for the Stern-Gerlach device whether an eigenstate of $\hat\sigma_z$ gets sorted into spin up by a $\hat x$ oriented device or spin down by a $\hat x$ oriented device will depend both on the position (which you don't know, and can't know) and on a silly choice of which brand Stern-Gerlach device you used. The frequency of the two results will be 50-50 for either brand and you will have no idea which result you will get. But the result is determined by things irrelevant to the spin of the particle it depends instead on the unknown, unknowable position and the brand of Stern-Gerlach.

And this is important. When people make up hidden variable theories, they do it in one of two ways. Carefully, and do it so it agrees with observations. Or try to make it have weird pointless properties such as making it behave in some random way that is inconsistent with getting correct results.

And here is the issue. There are correlations between position and spin that are actually different if you measure them partway through the spin measurement process and use these different brand Stern-Gerlach devices (or even afterwards since they literally deflect beams in different directions). So if you assume your theory doesn't care about the brand, then you are just going to be wrong because nature cares.

My question is, under the assumption that many physicists have done a lot more thinking about this than I have and have determined I'm wrong, why am I wrong?

If you goal is to criticize certain limited types of hidden variable theories, that's a reason. Still not sure why. And it would be wrong to think or claim you have said anything about the other theories.

Not the answer you're looking for? Browse other questions tagged quantum-mechanics quantum-spin quantum-entanglement bells-inequality or ask your own question.