Simple derivation of the doppler limit and recoil limit

Im doing an essay on laser cooling, and I've got two questions about the derivation of the two limits. Firstly, in the derivation of the Doppler limit, it is stated in many places that the scattering rate is dependent on kv (the wavenumber of the light, k, multiplied by the velocity of the atom, v,). Now I sort of get how the rate at which photons arrive at the atom is dependent on those variables but I'm not sure exactly why there aren't other variables involved and would appreciate it if someone could explain this to me.

Even though the spontaneous emmision provides momentum kicks that average out to zero, the mean squared velocity will still be non-zero, resulting in some heating of the system. This is because the momentum kicks that you get from a broad transition upon spontaneous emission will naturally have a statistical distribution related to the linewidth, resulting in a range of final velocities for the atom (i.e. temperature).

where $\delta$ is the laser detuning, $\gamma$ is the linewidth of the transition, $I_{sat}$ is the saturation intensity of the atomic transition, and $I$ is the laser intensity. You can see that as the intensity goes to infinity, the excited state fraction approaches 1/2, so as to not create a population inversion. The scattering rate is the excited state fraction, $\sigma$, times the natural linewidth, $\gamma$ of the transition for low intensities (which are usually the case for laser cooling), since you can only scatter the laser light as fast as atoms are repopulating the ground state when in a steady-state configuration. A plot of the scattering rate as a function of laser detuning is seen below: 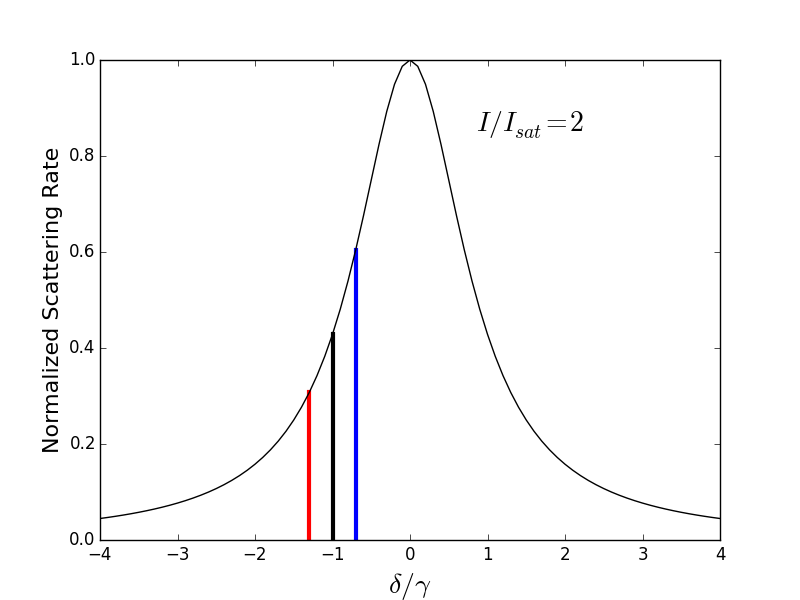 To ensure that on average, the momentum kicks provided will lower atoms' velocities, resulting in cooling, one can counter-propagate two red-detuned lasers (in 1-D), such that an atom moving toward either laser will experience a higher scattering rate from the laser that propagates opposite to its motion compared to the laser propagating along its direction of motion. The force on such an atom is given by the scattering rate times the momentum kick, $\hbar k$.

The Doppler cooling force in 1-D given by the following (for a two-level system):

You can see that the $kv$ term is added and subtracted to the laser detuning term, $\delta$. This comes from the Doppler shift as the atom moves in the light field. A plot of the cooling force as a function of velocity is seen below: 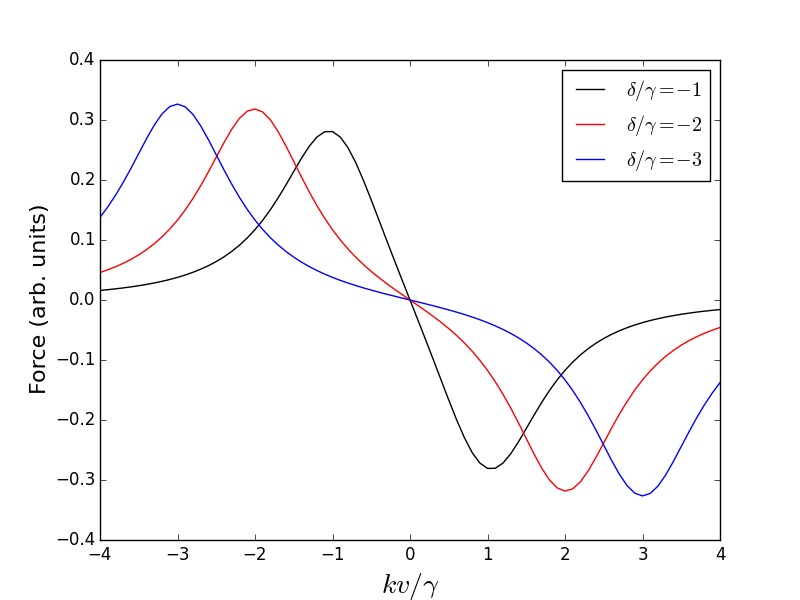 In this plot, you can see that for low velocities, the Force on an atom varies linearly with velocity at low velocities. At high velocities, the force begins to decrease, and atoms with velocities outside the linear region are said to be outside the "capture range". As you change the detuning of the laser, you can see that the slope of the Force as a function of velocity changes. The linear restoring force as a function of velocity is necessary for cooling to work, since the goal of this system is to drive the atoms toward low velocity.

For a good explanation about the recoil limit, see this answer: Doppler cooling limit vs recoil limit

Not the answer you're looking for? Browse other questions tagged laser cooling or ask your own question.

4
Doppler cooling limit vs recoil limit
3
Proper and rigourous derivation of Gaussian beam?
0
doppler cooling temperature limit
4
How does Sisyphus cooling work in a photon picture?
1
What is the difference between ultrafast laser and normal laser?
5
Why is collision broadening homogeneous and Doppler broadening isn't?
0
Why did the Maser amplify microwaves and not visible light?
0
How does the power consumption and cooling capacity of a Peltier refrigerator change when the interior is made reflective?