Everyone knows the story about countersteering. For those who don't, I will explain it below and after the explanation I will ask my question.

You can watch this short video as a beginning: The Physics of Countersteering.

This an excellent graphic demonstrating what is happening: 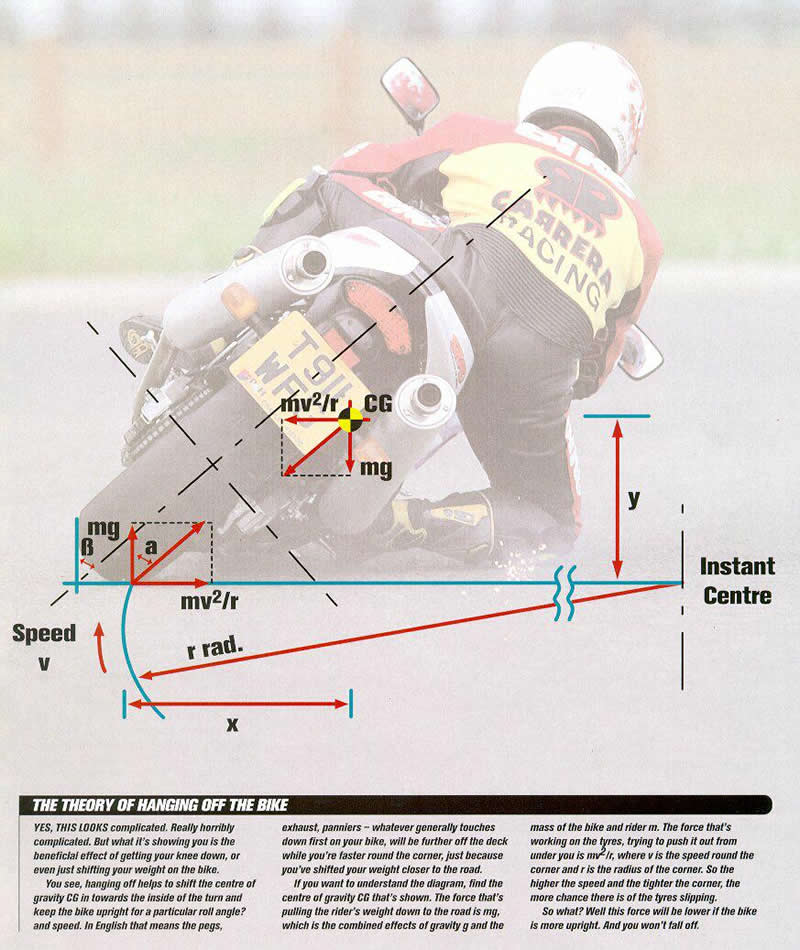 The key is that moving your butt moves the CG ($y$ and $x$ are the location in the image.) Basically what has to happen is for the moments created from the weight ($mg$) and the centrifugal force $\left(\frac{mv^2}{r}\right)$ to cancel out. (A moment is a force times a distance, in this case the distance to the contact patch in the direction parallel to the force - $mg\times y$ for weight, $\frac{mv^2}{r}\times x$ for centrifugal force.). You can express $x$ and $y$ with sine and cosine times the distance from the contact point to CG. Then the bike goes around the corner and sparks fly from your titanium knee sliders. You can speed up and lean over (or drop your butt) until the centrifugal force equals the maximum force that the tires/road combination can handle. This is of course assuming that you're not doing anything else like braking or accelerating which takes away from the grip available for cornering. If you want the equations to play with: $\frac{mv^2}{r}\times y = mg \times x , m = mass$, cancels out! It doesn't matter how fat your ass is for computing the speed/turn radius, just where it is and the ratio of ass fat to bike fat (it does matter for maximum speed though) -> $v =$ velocity -> $r =$ radius of turn -> $y =$ vertical distance of cg from center of rotation (contact patch) -> $g = $ acceleration due to gravity (constant $9.81$ $m/s^2$) -> $x = $ horizontal distance of CG from center of rotation The two forces are trying to rotate the bike in opposite directions which is why the are on opposite sides of the equation. so: $v = \sqrt{\frac{rgx}{2y}}$ OR $r = \frac{2yv^2}{gx}$ You can see that as $y$ drops or $x$ gets bigger (lean over more or hang off more for both, basically) either $r$ has to go down (tighter turn) or $v$ has to go up!

I recently explained the concept of a psuedoforce over here. See the last part of the answer (labelled "psuedoforces") if you do not know what they are before reading the next part.

Unlike the centripetal force, the centrifugal force is not real. Imagine a ball being whirled around. It has a CPF $=\frac{mv^2}{r}$, and this force is the tension in the string. But, if you shift to the balls frame (become tiny and stand on it), it will appear to you that the ball is stationary (as you are standing on it. The rest of the world will appear to rotate). But, you will notice something a bit off: The ball still has a tension force acting on it, so how is is steady? This balancing of forces you attribute to a mysterious "centrifugal force". If you have mass, you feel the CFF, too (from the ground, it is obvious that what you feel as the CFF is due to your inertia)

Now, they have solved the problem in the biker's frame. Thus, there is an outwards CFF$=\frac{mv^2}{r}$ acting on the center of mass. Now, the biker stays stationary wrt the rotating frame in the horizontal direction (this is the radial direction in the ground frame). Thus, there is some other force, balancing the CFF. This if the friction force, and it has been labelled confusingly as $\frac{mv^2}{r}$ (at the wheel). Without it, in the rotating frame, the body would not be at rest/uniform motion.

In the ground frame, the friction force is the CPF.

Neither of the $\frac{mv^2}{r}$s in your diagram are being considered as CPFs. The one at center of gravity is CFF, and the other one at the wheel is a friction force balancing the CFF in rotating frame. It is also the CPF in the ground frame.

The graphic shows a rider leaning waaay over in the middle of a turn, whereas countersteering is something you do while the bike is upright. Its text does not mention countersteering. Instead it appears to be about counter‍balancing.

According to the video, countersteering is an outward turn followed by an inward turn. Centrifugal force is only a pseudoforce; it only reflects inertia. If centrifugal force is pushing the bike frame to the side, that really means it's going in a straight line as the wheels follow a curved path under it.

So, the idea behind countersteering is that you turn sharply the wrong way for a short period, during which the front wheel goes one way, but it doesn't take you along — the rest of the bike tries to continue in a straight line, seeming to go the other way. When, after an instant, you correct the situation, this has started the process of tipping over.

Another factor is gyroscopic precession. Let us use my favorite motorcycle coordinates: $x$ points right, $y$ points forward, and $z$ points up. The wheels are rotating around the $-x$ axis. Suppose the fork is vertical, and I turn left by moving my hands around the $z$ axis. Precession will rotate the front wheel (and the entire bike) on the $z \times -x = -y$ axis, which means leaning to the left. Thus gyroscopic precession corresponds to regular steering.

For countersteering to work, the front wheel has to get to the side very suddenly, before the usual precession torque tips you in the wrong direction. When you correct by turning the handlebars the other way, though, the precession is increased because you are sweeping them through a larger angle. This may be just as significant as the positioning of the wheels; I don't know.

Countersteering is not a part of normal riding. You can feel it when it's happening. It's not easy to capture in one picture because there's a sequence of events. And, it's something you do with your hands, not with your butt.

Late answer, but I'm hoping this clarifies what is going on. Whenever the front tire is turned, the bike will turn in that direction. In the case of countersteering, the rider steers in the opposite direction in order to cause the bike to lean, as shown in this image. The description in the image is not quite right, as both front and rear tires will out-track from under the bike, and the parts of the bike above the roll center will in-track.

If the bike is initially vertical, then the initial counter-steering input will cause the bike to turn "outwards" while it leans inwards. That same outwards force that is causing the tires to track outwards (so that the bike leans inwards) is also causing the bike's center of mass to accelerate outwards. If steering right to lean for a left turn, the bike is initially turning right until the steering is brought back to neutral and then left, and vice versa. Out tracking can be used to quickly dodge potholes, you steer away from the pothole to get the tires to clear the pothole, which also causes the bike to lean, so after clearing the pothole, you have to steer the other way to get the bike back to vertical.

The steering geometry for a typical bike locates the contact patch behind where the extended axis of steering would intercept the ground. When leaned over, the ground is pushing up at the contact patch, while gravity related downforce is exerted at axis of the tire, causing the front tire to steer inwards in response to lean angle, causing a bike to return to vertical orientation (absent other inputs).

In the original question's video, there's mention of angular momentum or gyroscopic effects on steering, but at all but very slow speeds, the gyroscopic effect at the front tire results in too slow a rate of precision that slows down the self-correcting steering torque related to trail, acting as a damper (opposing self-correction), and at high speeds (100+ mph or 160+ kph), it's enough to virtually eliminate self-correction and a bike at high speed will tend hold a lean angle rather than return to vertical.

Regardless if a turn is coordinated (steady lean) or not (lean angle changing), there is a Newton third law pair of forces, the pavement exerts a centripetal force onto the tires, coexistent with outwards force exerted by the tires onto the pavement. If the turn is coordinated (steady lean) the outwards force is the same as the centrifugal reaction force related to the centripetal acceleration of bike and rider time the mass of bike and rider.

Not the answer you're looking for? Browse other questions tagged newtonian-mechanics forces centripetal-force centrifugal-force stability or ask your own question.

18
Does leaning (banking) help cause turning on a bicycle?
4
How does centrifugal force work?
3
How fictitious are fictitious forces?
2
Why can't we think of free fall as upside down rocket?
1
Why do we steer in the opposite direction while countersteering?
1
Steering a motorcycle
1
Advantages/Disadvantages of "hanging off" a motorcycle when leaning

10
Why is centrifugal 'force' perpendicular to line of inertia
2
Reference frame and centrifugal force
1
Steering a motorcycle
2
Why does the frictional centripetal force create a moment around a leaning bike?
1
Turning a bike, why does it lean?
1
Why do we steer in the opposite direction while countersteering?
2
Why do the inner tyres of a vehicle rise when taking a turn at high speeds?
1
Forces of a conical pendulum in the reference frame of the ball (of the pendulum)
0
Why does speed affect turn radius when turning a motorcycle given a fixed lean angle?