During the "Dark Ages" of the Universe's evolution, how lumpy (anisotropic) and dynamic was the mass distribution?

In the dark ages between recombination (~0.4 Myr post-BB) and reionization (~300 Myr post-BB) of atoms, there was not any condensed-phase matter (except maybe some form of dark matter), nor radiation exchange other than Lyman-alpha. The only light was a warm cosmic background, and virtually all ordinary matter was in the form of neutral atoms of primordial elemental distribution (H, He, and traces of Li, B, C, N). Collapse of gas to form stars on any useful timescale was inhibited by the gas's transparency (in the sense of emission, not absorption of photons). Transparency prevented heat loss by radiation, which prevented the compression of the gas under gravity.

Eventually, somewhere around 100-500 Myr, the expansion of the Universe as a whole cooled it down to where H2 molecules could form, allowing better radiation away of heat when collapsing a parcel of gas. A certain amount of lumpiness is needed however and this structure, perhaps on several scales, along with proper motion, would determine several things: collisions between parcels, scale & timescale of individual star formation, and the amount of chain reaction in star formation (supernovae -> triggering more star formation -> more supernovae).

My intuition is that with 100's of M's of years to even out and settle down, it would be surpassingly smooth and quiescent.

I've located a paper that goes into great (excruciating?) detail on the 21cm power spectrum (of baryons) in the dark ages. I won't pretend to have the expertise to understand the whole thing, but I'll try to bring out a couple of relevant points here. Note that this is all theoretical work in the framework of the standard cosmological model since actual observations of the 21cm power spectrum are apparently fiendishly difficult, most likely involving a radio observatory on the Moon. 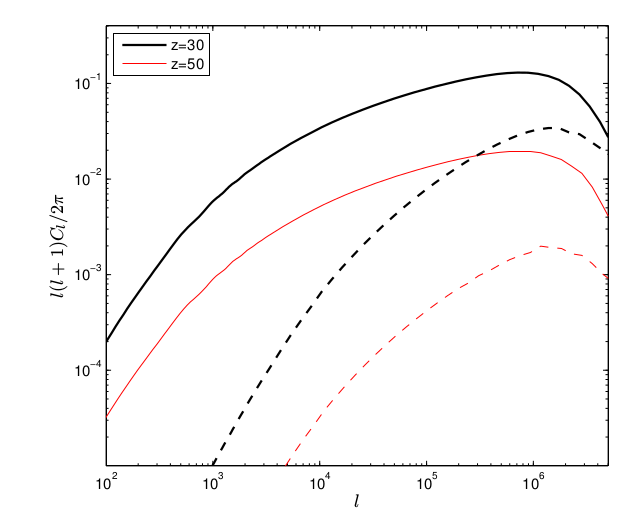 These slides may also be of interest, and if you want to get your hands dirty there's this source code.

"My intuition is that with 100's of M's of years to even out and settle down, it would be surpassingly smooth and quiescent."

According to the history of the universe here , the dark ages happen after the decoupling of photons and the Cosmic Microwave Background radiation 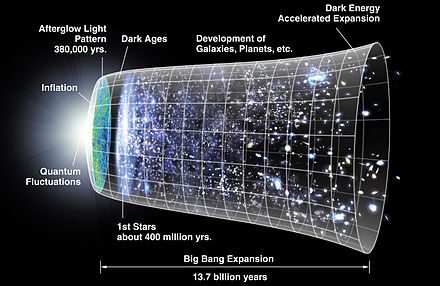 which happened around 380.000 years after the Big Bang. CMB is very uniform and fits a black body spectrum with great accuracy, and this uniformity could not be explained using thermodynamic arguments, since large parts of the universe were in a different light cone by that time.

The hypothesis of inflation was put forward to explain the uniformity by quantum mechanical arguments where a scalar particle called inflaton homogenized the energies in the very early universe. The CMB though has non uniformities

9 year WMAP image.The radiation is isotropic to roughly one part in 100,000.The detailed, all-sky picture of the infant universe created from nine years of WMAP data. The image reveals 13.77 billion year old temperature fluctuations (shown as color differences) that correspond to the seeds that grew to become the galaxies. The signal from our galaxy was subtracted using the multi-frequency data. This image shows a temperature range of ± 200 microKelvin.

It is this promordial anisotropy that explains in the Big Bang model the lumpiness of the observable universe:

The Universe that we see today is very lumpy. There are planets, stars, galaxies, and clusters of galaxies. Yet when we look at the afterglow from the Big Bang, we see an incredibly smooth glow across the sky. So how did the matter in the Universe get to be so lumpy after starting out so smooth?

Astronomers generally agree that gravity shaped the evolution of the lumps we see in the Universe today. The force of gravity between different chunks of matter caused the chunks to pull together into one body, and then that body pulled in more material, similar to a snowball rolling downhill, picking up more snow as it goes.

But each snowball must have a beginning – a small "seed" around which the other material will gather. Observations of the cosmic microwave background (CMB) – which is as close as we can get to seeing the Universe near its beginning – show that it has a temperature that is very close to uniform. The temperature of the CMB is a tracer of where matter was in the very early Universe. If the temperature was completely uniform, there would be no seeds for gravitational collapse – no way to form the lumps we see today.

By the time of the dark ages the kernels for the lumpiness were there since the inflation period before 10^-32seconds.

Not the answer you're looking for? Browse other questions tagged cosmology stars molecules photon-emission symmetry or ask your own question.

2
Why did formation of the first stars (population III) not happen earlier?

4
The role of dark matter in black holes and star formation
37
What are the alternative theories of dark energy? ($w \neq -1$)
7
What is the limit for the size of a galaxy?
0
Is it possible to have a hollow star?
1
Could mass also experience a form of gravitational redshift?
0
Is artifice admissible into cosmological models of mainstream physics?
5
Can the universe's topology change during its evolution?
2
If the Universe was dominated by a degenerate Fermi gas, would it have a maximum density in the distant past?
0
How to calculate the redshift of reionization?