What is your interpretation of Laplace operator? When evaluating Laplacian of some scalar field at a given point one can get a value. What does this value tell us about the field or it's behaviour in the given spot?

I can grasp the meaning of gradient and divergence. But viewing Laplace operator as divergence of gradient gives me interpretation "sources of gradient" which to be honest doesn't make sense to me.

is the best way to illustrate it: 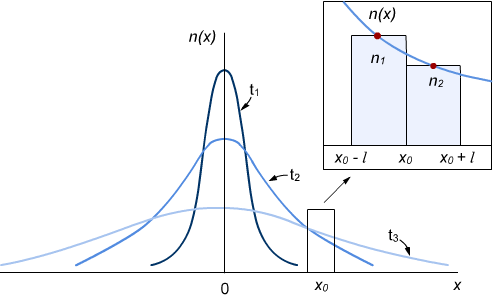 Regarding your question in the comment, you're right in a way. If you look here in the second section titled "Laplace's spherical harmonics",

then you see that for this common type of function the radial and the rotational degrees of freedom in 3D are actually so that their curvature is constant $\lambda$ respecitvely, but together they satisfy $\Delta f=0$.

To get another grasp of the rather "curvature of function" concept you could take a look at the calculus of variations. There, instead of the Laplacian in $-\phi\Delta\phi$, you might want to think of the explicitly quadratic expression $\nabla\phi\nabla\phi$. Analog as to how they sum over curvatures in the Einstein Hilbert action, they sum over this expression in the Lagrangian formalism for fields or functions.

Additionally, I want to say that if you already understand gradient and divergence, then it does make sense to thing of the Laplacian $\Delta=\nabla^2$ as the divergence of the gradient. Also the almost solution, namely the Greens function you remarked in the comment, is pointing in this direction. For the physical interpretation of these, in equations involving the Laplacian and for elliptic operators in general, you can first think of the full Poisson equation in electrostatics

where $\phi(\vec x)$ is the electric potential. Here $\rho(\vec x)$ is the charge density, which you can think of as being composed of point charges localized at positions $\vec y$ with densities described by $\delta(\vec x-\vec y)$. This thought can somewhat tautologically be represented by

Now by the superposition principle, which holds for the Mawell equations (or mathematically by the fact that your differential operator is linear), if you know the potential $G(\vec x)$ of a point particle

you already know the solution to the full problem. With

which resembles the summing up of all the point potentials, you find that Poissons equations is solved:

Now what is the potential of the point particle? At this point it is usefull to think of $\nabla^2$ as the divergence of the gradient

The gradient of the potential is the electric field, which is proportional to the force imposed on other point charges. Now what is the point particle force field which has zero divergence but is singular for $\vec x =0$? In three dimensions, the surface area $A$ of a sphere goes as $A\propto r^2$, so if the divergence should be zero, the radial solution should go as $\frac 1 {r^2}$, which just is Coulombs law. Integrating the remaining gradient, we find $$G(\vec r-\vec r_0)=\frac{c}{|r-r_0|}.$$ Similarly, if you're in two dimensions, then the surface goes with $r$, the field must go inverse to that and the integral, i.e. the Greens function goes as $log(r)$. This is the solution of the Laplace equation you graphed in the comment. Well, it's of course only a solution in case you take out the center. There it's divergent.

Very often you think of that delta peak as a source of a pertubation of some field. The differential operator comes from some Lagrangian density which encodes conservation laws and the associated Greens function describes how information porpagates away from the source. The field decays spatially and (in contrast to the Poisson equation with a change densitiy $\rho(\vec x)$) the remaining Laplace equation $\nabla^2\phi(\vec x)=0$ describes free dispersal/propagation of the potential/wave. So on the source points, there is some interaction and the field gets perturbed and then the information travels away from there. On these point, where no interaction takes place, the field fullfills the free equation you asked for. In this spirit, I recomment you to wrap your brain around what now time dependent the solution of the wave equation does space-time wise. Then you can still set $\rho$ independent of $t$ and be back to the Poisson equation.

As a side note, all this propagation business is a mayor theme in Field Theories (or 'its applications' like signal processing), where the Operators involve time derivatives. In Quantum Theories, these are "just" propability waves. Basically, if you know your free propagators and how to knot them together using Feynman diagrams, you the whole theory. An graphic and therefore illustrive such example is the Greens function of the heat equation, where you can literally watch then density dissolve.

Nothing really new to add to the two great answers given already - just a particular example that helped me. 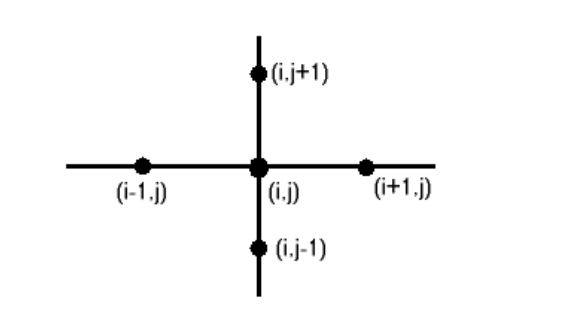 As I said, nothing new, but this was the concrete example where I first thought - aha that's what the Laplacian means !

... viewing Laplace operator as divergence of gradient gives me interpretation "sources of gradient" which to be honest doesn't make sense to me... interpret[ing the] Laplacian in certain physical situations ... might be a good place to start... I seek an interpretation that would be as universal as gradients ... applicable, correct and understandable on any scalar field.

Here's a different approach: Stop thinking of the potential field as the most fundamental representation.

Instead, assume that at least for some range of physically interesting and non-trivial situations, it is vector fields that are closer to the underlying physical reality. A simple way to do accomplish this is to assume two things: (1) the vector fields always represent literal flows of "something" across points in space, and (2) that "something" is both incompressible and conserved (e.g. water) as it moves across the space.

The second constraint is important because it ensures that a self-consistent scalar potential field can be defined as the field of speeds (velocity magnitudes) of the fluid at each point in the space. This potential field is useful both because it nicely simple (scalar), yet it also captures all of those non-trivial property assumptions in a single package.

The easiest example of why you might decide to take the vector fields as more fundamental is hydrodynamics, since in that case the vector field represents quite literal flows of an actual physical substance.

However, it also works well -- arguably even better -- for electrodynamics, which may come as a surprise to anyone accustomed only to the potential-first approach. Maxwell's early flow model assumed a literal flow or flux of "something" (not charge) from "+" to "-" (or vice-versa). He further assumed that this "something" was able to appear and disappear rather magically from ordinary space as it emerged from one charge and reached the other. Maxwell was perfectly aware of how odd that sounded, but it was not his point, since it was the flow that allowed interesting things to be calculated precisely.

So, back to your question: What is the "source of a gradient," and how does that make sense?

In the fluid or flux-first model that's easy: the gradient is the flow, represented for the moment by a function of the less real but mathematically handy potential field. Thus the Laplacian simply means the "source of the flow" -- a pretty literal concept, that.

As for applicability to any scalar field, I should note that there are many cases where the flux-first interpretation is clearly not the most physical one. A scalar field showing densities of an impurity within a solid certainly is not a flow field, for example! (Although even there, it is likely the record of an earlier flow field, since smooth gradients do not emerge from totally random impurity implantation processes.)

But even when I say that, here's what I've noticed that's surprising: For the situations where the Laplacian is interesting and useful, the flux-first model does seem to apply, at least in the most interesting cases. That's not surprising, really, since the Laplacian pretty much says just that: "This region is interesting because it appears that 'something' is flowing out of it or into it..."

In any case, I can honestly say I've found this model personally useful for trying to visualize problems in topics such as quantum theory, hydrodynamics, and electromagnetics, enough so that I actively look for how the inherently dynamic flux-first model might provide a better insights into processes nominally described by the far more static concept of the gradient of a scalar potential field.

I came across this question during my research today! Let me share with you my understanding of the problem with an example.

First off, the Laplacian operator is the application of the divergence operation on the gradient of a scalar quantity. $$ \Delta q = \nabla^2q = \nabla . \nabla q$$

Lets assume that we apply Laplacian operator to a physical and tangible scalar quantity such as the water pressure (analogous to the electric potential).

You can think of the gradient of the water pressure like a time steady current direction of water caused by direct contact with other molecules like a filed of direction arrows (a lame analog for the electric field (there doesn't exist a good analogy)).

In this context, the Laplace's equation perfectly matches the incompressible fluids (water is a good example).

PS I did not worry about the sign of equations.

A practical application of the Laplacian can be found in the "Atoms in Molecules" analysis of the electron density. The electron density of a molecule is a scalar field, and its Laplacian sort of gives the regions where the electrons are locally concentrated or depleted (the density itself usually has no minima, and maxima only at the nuclei).

Not the answer you're looking for? Browse other questions tagged differential-geometry curvature differentiation or ask your own question.

-1
What is the significance of the second derivative of a function?
9
Physical intuition for higher order derivatives
3
Physical meaning of harmonic function?
2
How can the D'Alembertian of a field be interpreted intuitively?
1
Physical meaning of the vector Laplace operator
0
Are Laplace Operator and mean curvature exactly the same thing for 2D function?