Does the density of virtual particles decrease when space expands due to dark energy? [closed]

I understand that vacuum (i.e. QED vacuum) is theorized to contain spontaneously appearing and annihilating pairs of virtual particles. Suppose the average density of those particles at a given moment in time and a particular location in space is Dinit.

Suppose we wait an amount of time such that dark energy expanded the space at that location and the density of virtual particles is measured to be Dexp.

Will the density at which the virtual particles appear at that location be the same or different? In other words, will Dinit = Dexp or Dinit > Dexp?

Edit: Maybe my understanding is incomplete, this is what I would like to know: 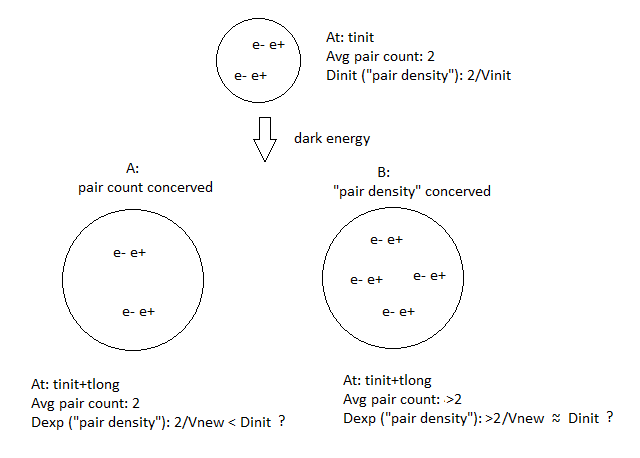 Suppose at some time tinit, the universe has a volume Vinit, and some experiment is performed that estimates that, on average, in some window of time, 2 electron-positron pairs appear and annihilate. The "pair density" Dinit is computed to be 2/Vinit.

Then time tlong passes, dark energy expands space, and the universe now has volume Vnew. The same measurement is performed, estimating the average number of virtual particle pairs appearing and disappearing in the new expanded universe.

Question, would A or B be expected to be observed:

Grossly, the "positing" of virtual particles is connected with the Heisenberg Uncertainty principle, HUP .

The virtual particles are not countable in the sense of your drawings. Their existence in the vacuum can only be seen by the changes in measurable interactions. The calculations need this vacuum virtual particles in order to accurately describe some data. Please see my answer to the question are-virtual-exchange-particles-real-or-just-mathematical

I understand that vacuum (i.e. QED vacuum) is theorized to contain spontaneously appearing and annihilating pairs of virtual particles.

Suppose the average density of those particles at a given moment in time and a particular location in space is Dinit.

Vacuum fluctuations are real. They're the electromagnetic equivalent of the little ripples on the surface of the sea. I'll continue on the assumption that you're talking about vacuum fluctuations.

I'm confident that the energy density will reduce. So the rate and/or wavelength of the vacuum fluctuation will reduce. I can't prove that that will happen, but conservation of energy is one of the most important tenets of physics. There are no perpetual motion machines.

Question, would A or B be expected to be observed?

Neither I'm afraid. We just don't observe electron-positron pairs popping in and out of existence.

Not the answer you're looking for? Browse other questions tagged vacuum dark-energy or ask your own question.

32
Do virtual particles actually physically exist?
5
Virtual particle density in an expanding Universe
3
Are virtual exchange particles real or just mathematical?
4
If empty space has energy, and space is expanding, is this energy equally distributed as space expands?
4
Power Density of Dark Energy (W/m³)
4
Does incidence of appearance of quantum fluctuation particles being lowered due to space expansion?

2
Quantum fluctuations and expanding universe
26
Why does dark energy produce positive space-time curvature?
5
Could Dark Energy just be particles with negative mass?
5
Is the energy density of vacuum uniform in the whole universe?
2
A simplistic question about virtual particles