Why the rockets mostly used for space missions are launched vertically upwards and not horizontally like an airplane carrier, gradually increasing its altitude, wouldn't that be more efficient?

To launch an object into a stable low-earth orbit requires accelerating the object to orbital velocity (approximately 5 miles per second) tangential to the Earth's surface.

Intuitively, getting out of (the majority of) the atmosphere and then accelerating more or less tangential to the surface seems like a good plan. This implies a nearly vertical ascent early and then a gradual gravity turn to a nearly tangential trajectory.

A hybrid combination of a large airplane-like vehicle that raises the rocket high into the atmosphere and then launching it from there is another approach which is used for smaller launch vehicles, e.g., the Pegasus launch system.

At least one company, Stratolaunch Systems, is taking this approach seriously for a larger launch vehicle. 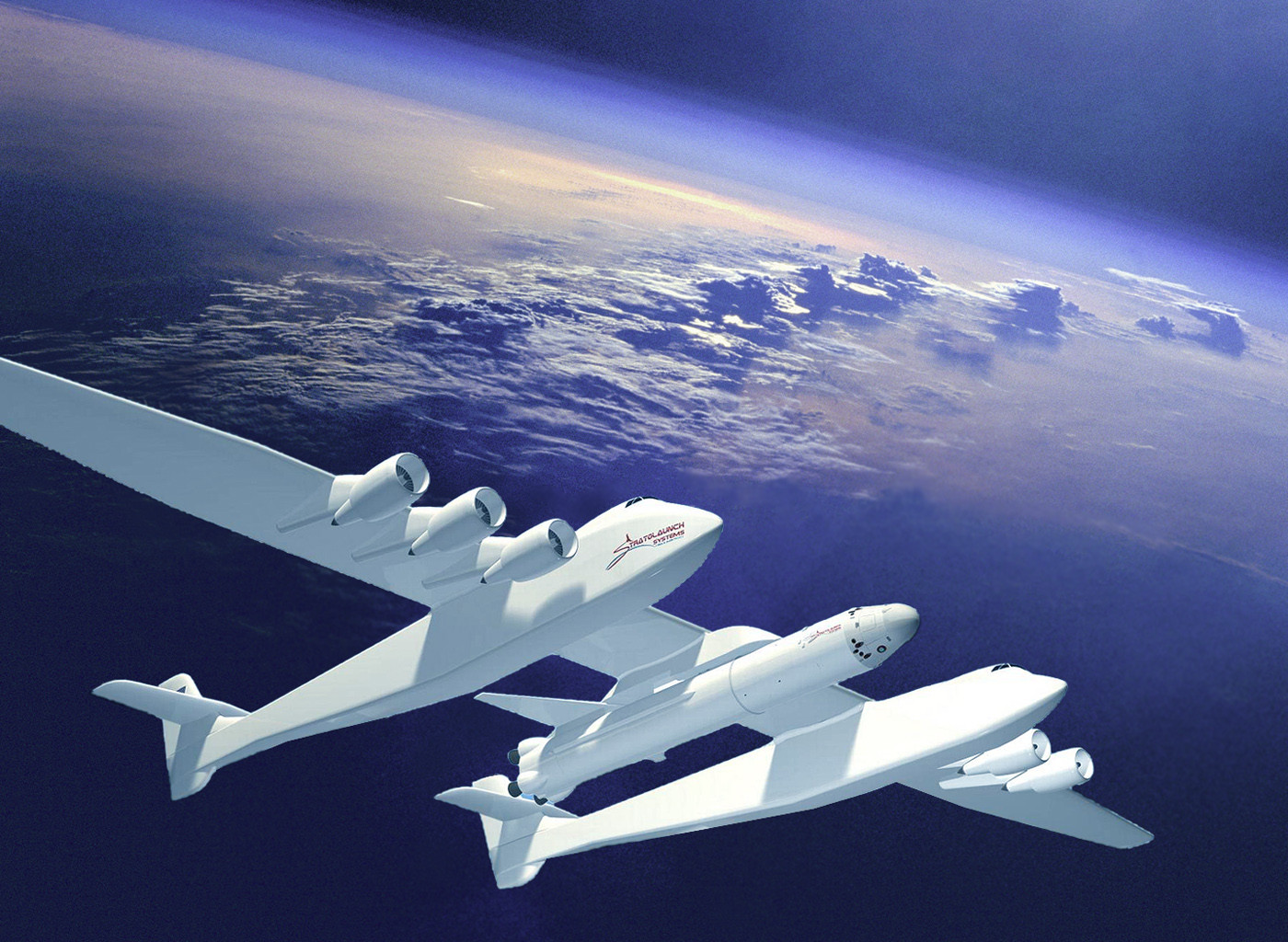 Airplanes and rockets stay off the ground by completely different mechanisms.

As Lubos mentioned, a rocket needs to move through Earth's gravitational field as quickly as possible in order to burn as little fuel as possible. Once the payload is at desired height for orbit it doesn't "fly"; it's just moving horizontally quickly enough that it "falls" around the Earth instead of into it. In fact, as a point of clarification, rockets do not launch completely vertical (at least to my knowledge) so that they already have a tangential component to their velocity. I suppose the best path is calculated through calculus of variations or something similar.

That being said, it sounds to me like you're suggesting a backwards space-shuttle: a device that takes off like a plane and "flies" to its orbital altitude (since space shuttles land like a plane on descent). The problem is that the lift force that allows planes to fly depends on the density of air around the wind. As you get higher up, though, the density of air decreases, so the plane has to fly faster and faster to maintain the same amount of lift (through Bernoulli's principle). This is not fuel efficient at all. In fact, the situation is so bad that by roughly 60 miles up, your horizontal velocity to maintain lift actual begins to exceed the velocity necessary to stay in orbit.

A rocket's goal is to get out of the Earth's gravitational field as quickly as possible because this is the way that requires the minimum amount of fuel.

A helicopter that is just "sitting" in the air has to waste fuel (because it has to fight against the Earth's attractive gravitational force) but it is making no progress in escaping the Earth's gravitational field. In the case of rockets, one wants to be as "dissimilar" to the helicopter as possible. If the goal is for the rocket to get from $h=0$ to $h=10,000\,{\rm km}$ (a reference level at which the Earth's gravitational acceleration is already very low) using the minimum amount of fuel, it's optimum to connect these two potential levels (concentric spheres) by the shortest possible path, and such a shortest possible path is clearly vertical (or "radial", relatively to the center of the Earth). Its length is $10,000\,{\rm km}$ in my case while all other trajectories connecting the two spheres are longer.

One can construct rigorous proofs that the vertical trajectory is the most efficient one (it consumes less fuel than every other path, and doesn't just have the shortest length) but the heuristic argument above should suffice. It's not just a good idea to start in the perfectly vertical direction. To save fuel, one also wants to achieve the greatest possible/allowed acceleration as quickly after the launch as possible. Any delay in the acceleration would make the rocket resemble the helicopter that just wastes fuel by sitting in the air.

Airplanes aren't launched vertically because their goal isn't really to efficiently escape from the Earth's gravitational field (or at least from Earth's atmosphere) but to move at a different location in the horizontal direction, to a different place on the Earth's surface. An approximately horizontal takeoff (with some tilt, to achieve the height where the atmosphere is less dense and the air resistance is lower) is better for that purpose.

This is a new answer to an old question, but none of the answers properly answer the question.

For several reasons, including structural integrity, the Earth's thick atmosphere, use of chemical rockets, intentionally limited acceleration, and terrain.

Suppose we take all of those reasons away, such as using a railgun with a ridiculously high acceleration (so we've obviously solved the structural integrity problem) to make an object escape from an airless moon, with no mountain range on the horizon for that launched object to smack into. In this case, the ideal launch angle will be horizontal. Railguns, mass drivers, and other systems have been proposed to accomplish exactly this.

Of the reasons listed above, two are key. One is structural integrity, which I'll address later. The other is the Earth's atmosphere. Rockets launched from the surface of the Earth are launched vertically so as to pass through the thickest part of the atmosphere at relatively low speeds. A key concept here is maximum dynamic pressure, or max Q. In the case of the Space Shuttle, max Q occurred at about 11 km above the surface of the Earth. Early rockets shook themselves apart because the dynamic pressure became too high. The launch profile of any launch vehicle is carefully designed to keep the maximum dynamic pressure within design limits.

Another issue with an atmosphere is heating. Flying at extreme speeds through anything but extremely trace amounts of air is a recipe for disaster. Stuff tends to melt (or worse) at speeds above Mach 7. Note well: Orbital velocity is Mach 25. Launching from an airplane flying in the stratosphere doesn't buy all that much in this regard because there's still plenty of air there. While aircraft launched vehicles tend to launch horizontally, they quickly turn toward the vertical shortly after launch so as to quickly gain altitude.

As mentioned above, structural integrity is the other key reason rockets are launched vertically. Some small rockets are launched at non-vertical angle. This is not an option for large rockets. An empty thin-walled soda can oriented vertically can easily support 100 kilograms or more. Tilt it even slightly from the vertical and it will collapse. A lot of the structural integrity of a rocket arises from the amazing stability of thin-walled cylindrical columns against vertical loads. A vertical launch is the only possibility for a large rocket that is intended to maximize payload mass to orbit.

21
Should a spacecraft be launched towards the East?
9
Why are there more vertical takeoff than horizontal for spacecrafts?

25
Why do spacecrafts take off with rockets instead of just ascending like an aircraft until they reach space?
4
Why do rockets accelerate fastest horizontally?
2
Why is the Pegasus launched from a subsonic airplane?
17
Why do we launch rockets during the day?
1
Why do cylindrical rockets require a roll and pitch maneuver?
1
Is the trajectory of a fire rocket inherently chaotic?
0
Are chemical rockets really beyond 60% efficient?