How can a human eye focus on a screen directly in front of it? [closed]

I am asking this question here because I think the answer has something to do with the way light is bent as it's captured through the eye.

I saw a show a while ago about tiny screens on contact lenses to pull up data on objects you see in the real world, I also just saw this article about Google testing the same idea with screens in the lenses of sunglasses.

So I would guess they would have to use some special technology to separate the light rays in a way that your brain could make an image from it. If that's correct, how would it work? if not, how would they get your eye to focus on a screen so close?

The answer is that your eyes would be focusing not at the concrete distance where the mechanism is placed, but at a virtual image which appears farther away.

This is just basic optics.

It is (one aspect of) what happens when you use a magnifying glass, for instance.

The virtual image of some point viewed through an optical instrument is that location in space to which the rays of light which are coming from that point appear to converge to. 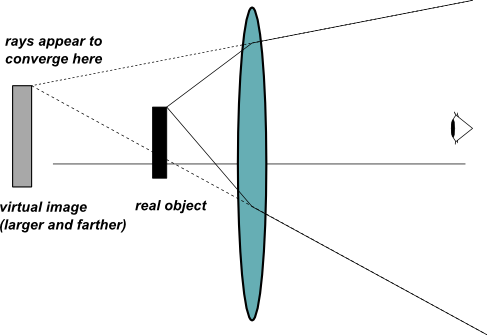 So in the case of the magnifying glass, it assists our vision in two ways. Not only does the image appear larger than the original object, it is also farther away, so that our eyes can focus on it. Glasses for correction of far-sightedness are magnifying lenses, yet their job isn't to make the world bigger, but rather to enable closer focus.

A screen that is placed very close to the eye simply has to contain the right optics so that a focused virtual image ends up on the retina. This will be done by somehow ensuring that the light rays emanating from the screen diverge at a sufficiently acute angle that they appear to come from a point that is much farther away than the screen really is: far enough away so that the eye can comfortably focus on that distance.

Sadly I don't have a pair of the Google glasses to play with, but I have seen similar things over the years, and these worked as projectors not screens.

You're quite right that it would be impossible to focus on a screen in the lens of your spectacles as it's far too close to the eye. However a projector mounted on the glasses can project the light into your eye as if it was coming from further away. Then your eye can focus it just as it would any distant object. If you can find any more info about the Google glasses it would be interesting to see if they use this technique.

In theory, an ultra ultra high resolution display could act as an holographic filter and produce an image that seems to originate from far away.

Or you can project an image from a single point straight into the eye. That does not require focus to be sharp. But it will be very challenging to align the virtual image with the real image (you need to anticipate any focus change of the eye)

Or maybe you can put a lens in front, and another lens behind a transparent display. One lens to allow you to focus on the screen and the other one to cancel out the effect. But it will not be practical (thick construction, loss of periferic vision, ...)

Or, use a semi-transparent mirror to combine the normal view with a lens-modified display. So far the ony practical idea.

When you see an object through your eyes, rays emerging radially from the object are focused. The location of the object that you focus to is where these rays appear to diverge from. Your eye doesn't care where the object actually is.

When you wear normal glasses, the glasses themselves are a 'screen'. The main point here is, the rays are appearing to diverge from someplace else. This someplace else is neither the original position, nor right in front of your eyes, rather it is somewhere in between(thats what glasses are meant to do)

So now, all we have to do to make strain-free supergoggles is to orient the screen elements in such a way that they appear to diverge from somewhere. This can be achieved by actually tilting the pixels, or by coating the screen with a thin refractive layer which acts as a lens on short distances..

Now the above solution is partially wrong, as we have TWO eyes, and our ability to judge apprent depth comes from the diverding rays which hit our eyes in slightly shifyed position. Thats how 3d glasses work, they fool your eyes into seeing a shifted pair of images.

With this in hand, the solution becomes simple. Calibrate the screens so that one of them shows a shifted image. We will still have to do a bit of the pixel reorientation as above, but not that much, as you have already fooled your brain on the ficussing distance, now you just need to tweak it so that it actually focuses at that distance.

One more thing to keep in mind is the intensity of light. It must be kept low to avoid strain as well as to make the distance realistic.

EDIT: In this entire discussion, I have assumed the pixel elements to radiate light in one direction (they don't). This will make the "tilt the pixel elements" approach not work. The "thin refractive layer" should still work.

I do not believe there is any curent technology to use something like a pair of glasses to create images of a virtual reality in our eyes. Unlike some of the tosh described above, glasses are not screens they are lenses. They alter the angle at which the light enetring your eye is bent to work with the natural lens in your eyeball and make sure that the image you see is focused on your retina not in front of it (short sightedness) or behind it (far sightedness). No one can possible focus on an image less than an inch from your eye. Try it. Put your finger in front of your eye and try looking at the paterns of your fingerprints. See them? No way -- just a pink fuzzy mess. The nearest point of focus for most of is going to be about six inches away -- and that's if you've got GOOD close up vision.

The images we see of the world are created by light rays enetering our eyes and focusing a tiny upside down image on our retina. This is what we see. Might it be possible to shine a projected image onto our retinas, using the lenses of our eyes to focus it correctly? Maybe -- but not with existing technology. That's why all the Google videos say "This may be how it is in the future." Then they pop all those little icons on the video and make it look as if that's what the guy is seeing. That's special effects/simple graphics -- not what the guy is seeing. Given the live demo we saw at the show out in California with the skydivers, I'd even say the video they show in the promotional bits is not shot with the cameras they're using in those prototype glasses. It's shot with a high end HD video camera. Smoke and mirrors.

And even when they do manage something that shines powerful light beams into your eyes, will you use it? Ooops! Sorry about making all you early adopters blind. Our new version is much better.

When you look into a pair of binoculars, that are focused at infinity (distant viewing), the rays entering your eyes, are many pencils of parallel rays, that enter your eye from different directions.

They appear to come from the "exit pupil" which you can see as a bright disk floating just above the eyepiece, when you point the binoculars at a bright white screen.

The eyepiece optics, forms those pencils from a sharp real image at the focus of the eyepiece, which image, is formed by the front objective lens.

The gizmo you are talking about is basically an eyepiece, and the digital screen is actually at the focus of that eyepiece.

Any good eyepiece will show a sharp ring perimeter around the field of view. That is the plane where the mini display screen goes.

There has to be special lenses between your eye and the screen. It works like your camera's macro lens, without it your camera won't focus as close as it will with the macro lens. The same applies for your eyes: if you put a macro lens very close to your eye, you can see objects very closely. Except the lens is specially made and not even near as big as normal systems cameras lens. So it goes like this:

SamuSamu
1
$\endgroup$
Add a comment  |
Highly active question. Earn 10 reputation (not counting the association bonus) in order to answer this question. The reputation requirement helps protect this question from spam and non-answer activity.

Not the answer you're looking for? Browse other questions tagged optics popular-science biology vision or ask your own question.

6
How do head mounted displays simulate infinite focus?
1
How do I determine lens placement inside the minimum focus distance?
3
Why do 3D glasses only work from some distance?
0
Why do sun glasses shield more sunlight from a specific angle?
0
Can we see the image of inside of our eye, in front of the eye?
3
Does this work to reduce eyes strain? Enlarge the PC monitor with a lens