Schwarzschild metric: Change in coordinates corresponds to change in object?

I have been reading about the Schwarzschild metric in the book "General Relativity: An Introduction for Physicists" by Hobson, Efstathiou and Lasenby and it appears to say something counter intuitive. This is how I have interpreted it:

So if my interpretation is right how can a simple change in coordinates change the object we are considering? Surely the object described by the Schwarzschild metric should be coordinate independent?

Your observation is correct! The issue is one that is regrettably rather commonly left unexplained in physics texts: A single coordinate system on a manifold does not define the spacetime. Often, the coordinates useful for computations in physics do not even cover the entire space, i.e. they are not defined everywhere on the object of study: The (spacetime) manifold. This is the case with the Schwarzschild coordinates, as well as the Eddington-Finkelstein coordinates.

In your particular case, there does happen to exist a set of globally defined coordinates, known as Kruskal-Szekeres coordinates, but it is important to note that this does not have to be possible Some spaces just do not admit a global chart. One particularly simple example is the sphere, $S^2$. The "largest" chart that one can construct is that obtained by "stereographic projection" (see the picture below) from one of the poles: However, it is clear that such a construction leaves a single point "uncharted" (can you see which?) 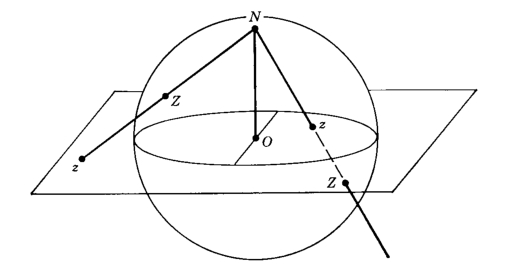 There is a lot more that can be said about this, because it ties into a larger issue: Reliance of coordinate-dependent expressions versus invariant objects, or local vs. global techniques. Physicists love to work locally. For instance, it is very normal for physicists to deal with equations involving "tensors" with indices, such as Einstein's famous field equations $G_{\mu\nu}=8\pi T_{\mu\nu}$. They come with transformation rules for switching between different coordinate systems, and are quite handy to deal with.

Historically speaking, this was the approach taken by the first differential geometers (such as Levi-Civita). However, the modern (mathematical) understanding of tensors is a bit different: They are understood as abstract objects that do not depend on any coordinate system and do not have any indices attached to them. Only their components (think of vector components) do, when expressed in terms of an---as we saw, generally speaking only locally defined---coordinate system, carry indices: For example, a tensor $\mathbf T$ could be expressed in terms of local coordinates $\{e_i\}$ as $\mathbf{T}=\sum_i T_i e_i$. However, it is not accurate to identify $T_i$ with $\mathbf T$. Nowadays, most mathematicians prefer working with abstractly defined, coordinate-independent objects such as $\mathbf T$. The reason why physicists keep on working with coordinates is probably a combination of (1) history and (2) convenience: It is quite easy to manipulate tensor components, as most of us know very well.

However, as you rightly noted, one must take care not to get confused about what is what: The coordinates only show one of the many faces of geometric objects such as manifolds or tensors. A single coordinate expression does not define the manifold (although the collection of all compatible coordinate systems taken together, known as the atlas, does fix the manifold!).

It's not true that in Schwarzschild coordinates a photon cannot cross the horizon. The fact that the coordinate $t\rightarrow\infty$ doesn't stop the photon, it's just a coordinate, and you can easily set up similarly pathological coordinates for e.g. Minkowski spacetime where clearly photons are unhindered.

Good point about Eddington-Finkelstein coordinates, indeed it seems like a white hole appears magically. However we could do this even more simply from Schwarzschild coordinates: just reinterpret the "future" direction of time (the Einstein equations do not enforce which way time flows). This is a white hole in Schwarzschild coordinates; and we didn't even change the coordinates or metric! Back to Eddington-Finkelstein, indeed d'Inverno ($\S16.6$, see also $\S17.2$) calls a retarded coordinate "a time-reversed solution". I also recommend Kraus & Wilczek (1994, $\S2$), which concerns a different coordinate system but with the same qualities of cross-terms, and advanced and retarded variants.

Not the answer you're looking for? Browse other questions tagged general-relativity black-holes differential-geometry coordinate-systems or ask your own question.

5
How to prove a symmetric tensor is indeed a tensor?