Does The Earth appear to orbit the ISS from its point of view?

Does the International Space Station orbit the Earth with one side constantly facing the Earth? Or does it look more like the Earth is orbiting the ISS from its perspective?

Once it goes into orbit, it will remain in the same attitude, what I mean is the cupola the astronauts look out of always looks "down," was far as I know. I don't think the ISS has any spin, so it should stay in the same position. 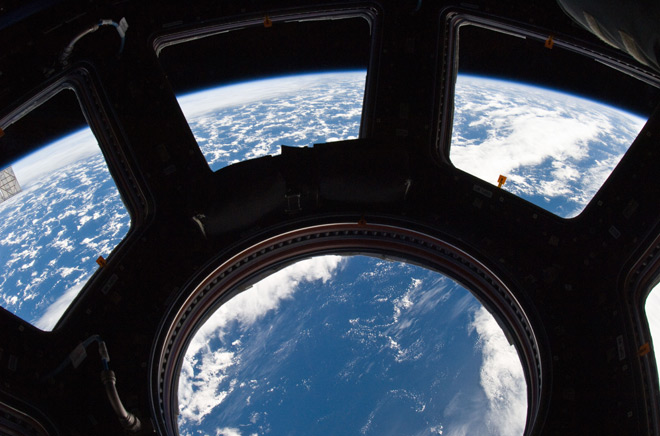 The International Space Station orbits about 354 kilometers (220 miles) above the Earth and travels at approximately  27,700 km/hr (17,211 mph), so it takes about 92 minutes to circle the Earth once. For this reason, every 45 minutes the astronauts on-board see a sunrise or a sunset, with a total of 15 – 16 of each every 24 hours.

Actually, if the astronauts see the maximum number of sunrises possible, then it must effectively point down, but I will try to answer James's point about a slight spin if I can find an orbital illustration.

I would imagine, no matter what their physical senses say, the astronauts will see the earth as if from a very high flying plane, which some, or most , are used to anyway.

It would take a large amount of fuel to move the ISS, and to kill the AM, so the loading craft would do as much of the manoeuvring as possible.

No more million-dollar maneuvers. When the space station must rotate for operations such as docking of resupply vehicles, it uses thrusters that run on propellant costing nearly $10,000 per pound. This demonstration successfully rotated the station 90 and 180 degrees without propellant, saving more than 1 million dollars worth of propellant on the 180-degree maneuver. The new technology uses gyroscopes, or spinning momentum-storage devices powered by solar energy, to maneuver along special attitude trajectories. It will substantially reduce propellant use and contamination of solar arrays and loads. With this technology, long-duration space exploration missions can carry less propellant and more provisions.

Yes. Under any normal operating mode today, the station rotates at the rate of once per orbit so that a particular part of the station always points at the earth. This is almost identical to the way the moon orbits the earth.

But this is not something that has to happen. During assembly, there were times when the station did not rotate. So if there were an observer on the station, they would see the earth move all the way around the station.

This ISS attitudes page from NASA has some animations of these attitudes.

Not the answer you're looking for? Browse other questions tagged orbital-motion reference-frames or ask your own question.

30
Why does it take so long to get to the ISS?
0
How is space ship's acceleration perceived if the acceleration is perpendicular to the velocity?
2
What are the steps and energetic requirements for getting from the HST to the ISS?
4
Gravity on the International Space Station - General Relativity perspective
33
If we threw a baseball from the ISS, could we deorbit the ball?
0
If Earth orbit around the sun was closer would it change the shape of its orbit into a dented 104 node ellipse?
0
Why the Moon does not change its orbit from Earth to an another planet?
4
Can satellites stay in orbit when the Earth is being accelerated?
2
Can a satellite have one axis horizontal to its host, and spin about that axis?