I'm confused by a discussion in Ashcroft and Mermin's textbook on pg. 512-513. They say that if we have a bunch of ions in a solid and neglect the effect of the conduction electrons, then waves will propagate at the plasma frequency, which contradicts the idea that acoustic phonon energies should vanish as $\mathbf{k} \rightarrow \mathbf{0}$. They then say that the conduction electrons are essential to explain why the dispersion relation in metals is linear.

[...] a set of charged point ions should undergo long-wavelength vibrations at an ionic plasma frequency $\Omega_{p}$[...]

This contradicts the conclusion in Chapter 22 that the long-wavelength normal-mode frequencies of a monatomic Bravais lattice should vanish linearly with $k$. That result is inapplicable because the approximation (22.64) leading to the linear form for $\omega (\mathbf{k})$ at small $k$ is only valid if the forces between ions separated by $R$ are negligibly small for $R$ of order $1/k$. But the inverse square force falls off so slowly with distance that no matter how small $k$ is, interactions of ions separated by $R \geq 1/k$ can contribute substantially to the dynamical matrix (22.59). [They mention that experimental evidence, however, supports a linear dispersion relation.]

To understand why the phonon dispersion is linear at small $k$ it is essential, when considering ionic motion, to take the conduction electrons into account.

[They then discuss how screening results in an effective short-range interaction.] [...] yielding an effective ionic field that is short-ranged, and therefore capable of leading to a phonon dispersion relation that is linear in $k$ at long-wavelengths.

First of all, it is perfectly possible for goldstone modes to have non-linear dispersion relations (e.g. a quadratic $k^2$ dispersion), see more discussion here.

It is important to point out that the other acoustic phonons have linear dispersions.

In the case of graphene, the quadratic dispersion of the ZA mode seems to come from the rotational and reflection symmetry of the system, more discussion can be followed in this paper. 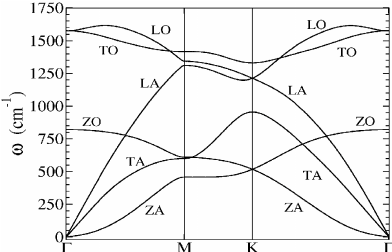 I think what they are trying to say is that in a lattice of ions, the waves propagate at the plasma frequency only if we can assume that the interaction between ions is sufficiently small (this assumption is contained in the part "is only valid if the forces between ions separated by R are negligibly small for R of order 1/k").

Not the answer you're looking for? Browse other questions tagged solid-state-physics symmetry-breaking dispersion phonons goldstone-mode or ask your own question.

5
Number of Goldstone Modes in the Heisenberg Model?

2
Question about electron-hole pair generation in depletion layer for a p-n junction photodiode
1
Where does the lowered effective mass of electrons come from?
1
Why are sound waves associated with modes obeying linear dispersion relation?
1
Smallest relative velocity driving a two-stream instability
4
Understanding the Plasmon dispersion relation to first approximation
1
Why does the concept of effective mass fail for linear dispersion relations?
3
How to understand the difference of spin wave excitation for ferromagnetism (quadratic dispersion) and anti-ferromagnetism (linear dispersion)?
2
How exactly do the electron and phonon interact for the process of recombination to occur?
9
Ideal Bose gas and Goldstone modes
1
What happens to Langmuir waves at a density gradient in plasmas?