Do solar systems typically spin in the same direction as their galaxy?

We do not know much about the alignments of other solar systems. Both the Doppler shift discovery method and the transit discovery method have a rotational ambiguity about the plane of the exoplanets' orbits. In other words, if we were to observe a transiting planet, we know that the inclination is close to 90 degrees to the line of sight, but we could rotate the system around our line of sight by any angle, and would see the same observational signatures.

The general assumption is that there is no relationship between the angular momentum directions of stars (and their planetary systems) and the Galaxy. Turbulence in molecular clouds on relatively small scales compared with the dimensions of the Milky way randomises the angular momentum vectors of collapsing prestellar cores. A possible alignment mechanism could come about through the threading of giant molecular clouds by the Galactic magnetic field.

If we knew what fraction of stars had close-in, potentially transiting planets, we could use the numbers of detected transiting exoplanets in the Kepler field to say whether that number was consistent with random orientations or not. Alternatively, if we had another Kepler field pointing in a different Galactic direction, but with similar sensitivity to the original Kepler field, then the relative numbers of detected transiting planets in the two fields might tell us of any non-random orientations. For example, if orbital planes were all aligned with the Galactic plane, then no transits would be seen for any star viewed out of the Galactic plane. (I think this extreme possibility can already be ruled out.)

Various data from Kepler and stellar modeling allows the inclination of the orbit to be determined. Several SETI Seminar videos goes into this in some detail. Whether the eclipse cuts a little bit or straight through the middle of the star and the statistics that indicate complete misses are consistent with random orientations without enough data to see if they are biased with the galaxy rotation.

This talk tells us stars are oriented randomly, and they can tell which way it's pointing and which (different) way the planet's orbits are. 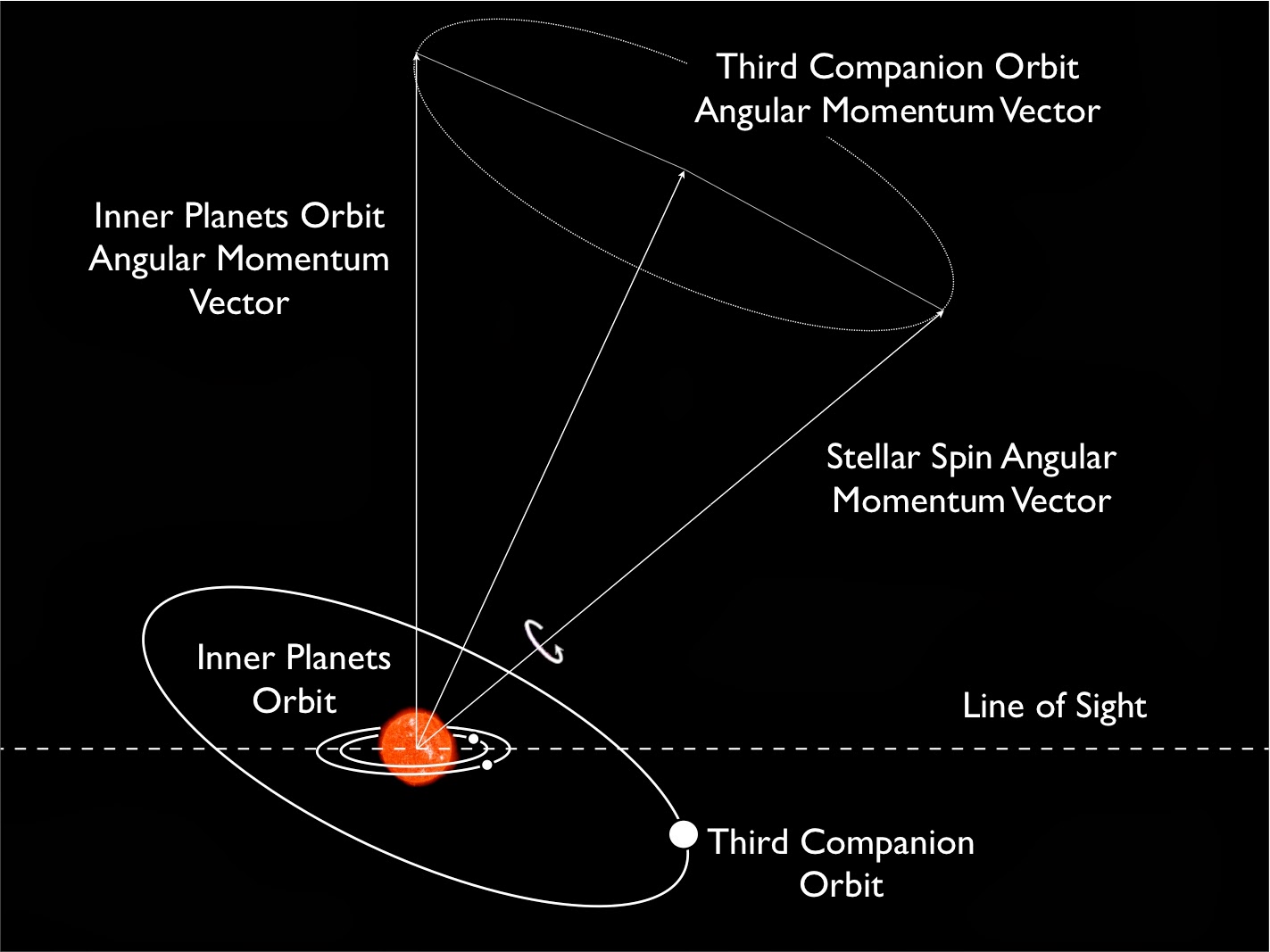 To measure the rotation of the star in Kepler-56, the authors looked at oscillation modes due to a combination of pressure and gravity waves inside the star. Certain pressure-dominated and gravity-dominated modes will split in a unique way depending on the inclination of the star’s rotation axis. The authors model the splitting of six modes to derive the star’s inclination. Because the planets transit, their inclination angle is very close to 90 degrees. Therefore, any angle different from 90 degrees for the star’s inclination is a direct measure of obliquity.

The advent of steroseismology via other instruments and exploration as a new viable technique will give more varied data as to whether we're looking at the side or top of a star, or whatever degree in between. But existing spectra (a mature field) already provide that: more Doppler broadening if you are looking at the side, none if looking down at the pole.

The transit also causes a spectral shift as it shades the limb rotating toward or away from us, and the rate of rotation varies with latitude. So these measurements (I can't find a video that goes over such detailed geometry) give more.

This paper talks about inclination, but I could not find a SETI Seminar video that went over the data analysis that explains how you can infer inclinations.

They know whether the planetary system is edge-on, just clipping the side of the star's disk and thus barely transiting, or something in between. Most of the time it misses completely, but the statistics of the ones we see and the number of those we don't see are presumed to be random, which is necessary to figure out the percentage of stars with planets (at all) even though we only see those that are approximately edge on. Since the amount of tilt that will provide a visible transit varies with the size of the star, size of the planet, and distance of orbit, the statistics can be diced rather well to look for any sign that the tilt is not truly random.

Axial tilt gives the axial tilt of the more familiar bodies in the Solar System. An axial tilt of greater than 90 degrees implies the body is rotating backwards.

So we see Venus, with little axial tilt, rotating very slowly backwards (due to a tidal resonance with Earth) and Uranus and Pluto with pronounced tilts exceeding 90 degrees.

All the other bodies in the list rotate in a prograde direction, within 27 degrees of the orbital plane / ecliptic.

So in the solar system at least, most bodies rotate in the same direction as the sun. This suggests they were formed from the same accretion disk that formed the sun, which was a mass of gas and dust swirling in a particular direction.

I suspect that the same is more or less true of the stars /solar systems in our galaxy. The galaxy clearly has angular momentum in a particular direction, and matter gathered from it to form a star might be expected to swirl in the same way.

However we must not overlook the case of Venus, whose near-perfect reversal of rotation is due to tidal effects. Matter orbiting closer to the centre of the galaxy overtakes matter that is orbiting further out. This might lead to retrograde solar systems being formed.

In general, if there is a rule, there will be many exceptions. It's like the common idea that the Coriolis force makes water swirl anticlockwise down the plughole in the Northern hemisphere and anticlockwise in the Southern: it may have an influence, but there are lots of other factors (for example, which way the water was swirling in the sink before the plug was pulled), which means the effect is largely irrelevant.

Kepler discovers planets by looking at the star and see the star get dimmer when the planet passes in front of the star. This would imply that the planet was orbiting on a plane parallel to Earth. This article states that nearly every star hosts a planet. Although I'm not an expert, this would suggest to me that the orbits of many of the planets on many nearby solar systems are lined up with the galaxy.

Not the answer you're looking for? Browse other questions tagged angular-momentum astrophysics stars solar-system galaxies or ask your own question.

12
Are the orientations of spin-axes and binary/planetary orbits random or is there any relationship with the Galactic plane?
0
In searching for an exoplanet by observing transitions, isn't it rather rare that an orbital plane would line up with Earth?

12
What is the name of our Galaxy?
2
Is it true that our solar system belongs to another galaxy which collides with the milky way galaxy?
3
How can the Andromeda Galaxy alone have more mass than the Local Group?
8
What is the luminosity of the Milky Way galaxy?
0
What is the direction of our solar system in the Milky way galaxy and in the universe?
3
Are we looking at single stars, or solar systems?
18
What angle does our Solar System make with The Milky Way?
1
How did the Holm 15A Galaxy BH reach 40 Billion Solar Masses?
2
Angular momentum orientation of the orbits of the two stars with respect to the Solar System