What is going on in the photon-photon scattering Feynman diagram? 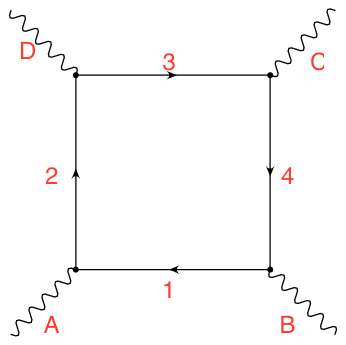 I understand the basic concepts of a Feynman diagram, but I don't get what is going on here. I have named the photons ABCD and the fermions 1234 for clarity.

I'm going to assume that the vertical axis is time (although I suspect this doesn't matter).

I can accept that photon A turns into an electron(2)-positron(1) pair, but I don't quite know what happens next. Positron 2 absorbs photon B to become positron 4? And what's going on at the top?

It is not a good idea to see a Feynman diagram as some sort of collision process really happening.

The diagram is just a term in the perturbative expansion of a quantum mechanical transition amplitude (in other words, a nice "graphical" way to represent a bunch of integrals).

The only actual observed objects are two incoming photons with a certain energy, and two outgoing photons with different energies. The probability of such a process (given the income and outcome) to happen is given by the amplitude associated to this particular Feynman graph. It is also worth noting that such probability is not completely accurate, since a single diagram is just one term of the infinite formal perturbative expansion giving the transition amplitude.

[Since none of the experts have so far posted an answer from a pedagogical standpoint, I'm going to have a try. I'll make it a community wiki, so please consider improving it if you can. Even better, post your own answer!]

To see why, let's start by describing the diagram you posted this way:

But line 1 could be going in either direction, so an equally good description would be:

So what's going on? Is line 1 an electron or a positron? Well, it isn't either; according to ACuriousMind's comments, the correct terminology is a propagator, though I believe that in popular science it is often instead referred to as a "virtual particle".

Now, the propagators in this particular diagram are certainly related to electrons/positrons; they are derived from the mathematical description of the quantum field that represents electrons and positrons in the theory of quantum electrodynamics. But they aren't particles; in particular, they don't have associated particle states. Heck, we can't even distinguish between electrons and positrons!

(I believe that last point has a real physical significance; if having an electron going one way or a positron going the other were in fact two different diagrams, we'd have to count each of those diagrams towards the final sum, whereas in fact to get the right answer we have to count the diagram once.)

Another problem with such a description is that it begs the question: why do electron 2 and positron 3 have to annihilate? Wouldn't it be much more likely that they would miss one another? Well, unless the photons are energetic enough, that can't happen because it would violate the conservation of energy. But if you fail to distinguish between propagators and particles, there is no way to explain, in terms of the diagram itself, why it can't happen.

Being aware that these descriptions exist may, in my opinion, be useful in motivating the use of Feynman diagrams until such point as you are familiar enough with their relationship to the mathematics to take them for granted. But it is important to understand that they are not truly meaningful.

Not the answer you're looking for? Browse other questions tagged particle-physics photons quantum-electrodynamics feynman-diagrams or ask your own question.