This research (see press article and technical paper), conducted on 3000 elliptical galaxies (which are typically galaxy merger results), reports finding "distinct relationship between the mass of the dark matter halo and the black hole mass - a relationship stronger than that between a black hole and the galaxy's stars alone".

Does such relationship exist in spiral or irregular galaxies ?

The relationship they're claiming is a little more subtle than what comes across in the press article:

So what the paper is claiming directly is that the central velocity dispersion correlates more strongly with the x-ray temperature than with the stellar mass. If you make a couple of assumptions, this can be interpreted as a correlation between dark matter mass and black hole mass.

To get to your precise question, yes one could do something very similar for spiral galaxies, and perhaps also irregulars. The $M-\sigma$ relation also applies to spirals and S0s (lenticulars): 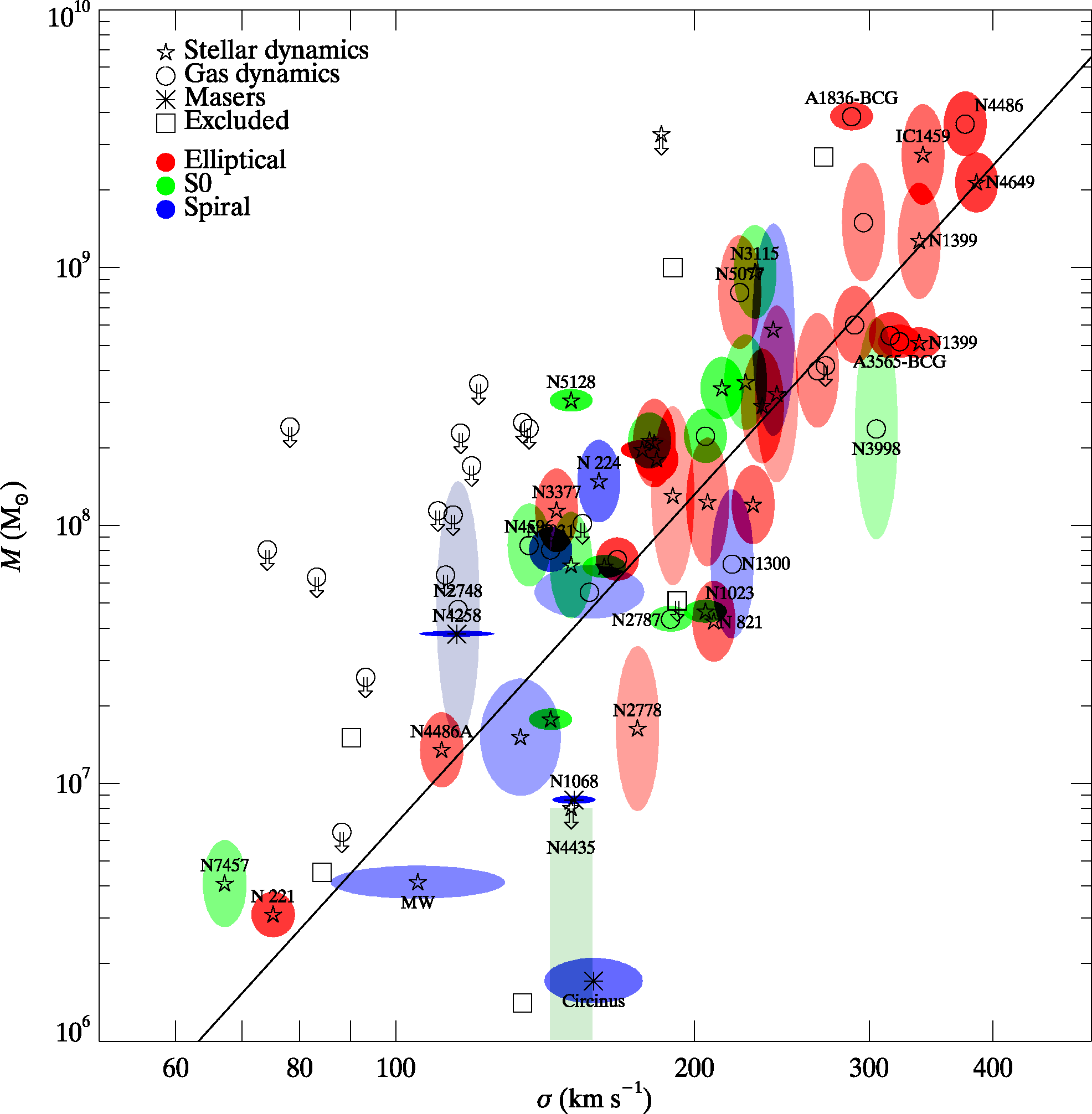 The graphic is from this paper. Notice that the scatter in the relation is rather large, so that the uncertainty in the black hole mass inferred from the velocity dispersion is something like an order of magnitude. Getting the x-ray temperatures to estimate the total masses for spirals is a bit tricky, since most spirals are not massive enough to have a hot gas halo that emits in the x-ray. Other estimates of the total mass (e.g. rotation curve maxima) might work, though.

The trouble with irregulars is that I don't know of any with observed BH masses, so applying the $M-\sigma$ relation in this case would be pure speculation.

Not the answer you're looking for? Browse other questions tagged black-holes dark-matter galaxies or ask your own question.

56
Why the galaxies form 2D planes (or spiral-like) instead of 3D balls (or spherical-like)?

7
Experimental foundations of the "otherwise galaxies would not hold together" argument for dark matter
2
Lagrangian point or dark matter?
4
What is the average mass of galaxies according to Hubble Deep and Ultra Deep field observations?
2
How will the Milky Way / Andromeda combined galaxy appear in 4 billion years?
1
Could black holes interact with dark matter at distances far greater than matter?
8
Is there a theoretical maximum "size" for galaxies?
2
Is dark matter due to observational error