How is an object kept on a table is at rest?

When there are two bodies A and B lying in contact we can apply Newton's third law which says that the action and the reaction act on different bodies and not on the same body. That is why two forces don't cancel out each other. Fine till now. If this is the case then how can an object kept on a table sit at rest? My teacher says that in this case both the forces are acting on the object kept on the table. Aren't the action and the reaction acting on different bodies that is the table and the object. Is he right?

As usual for mechanical statics problems, the entire thing becomes clear if you draw a free body diagram. 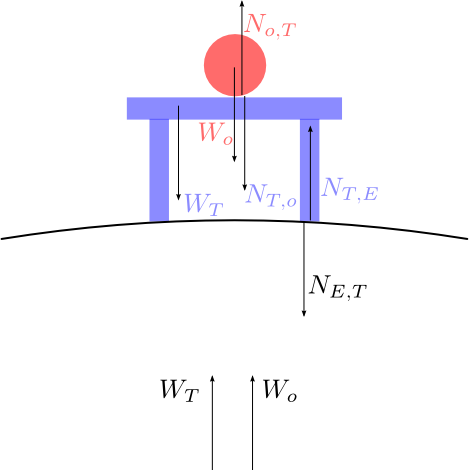 Here we have the object (red) sitting on top of a table (blue) which is sitting on the Earth (black curved line). The object experiences two forces

This probably already answers your question, but let's go on a bit.

Imagine there are 3 objects. The Earth, a table on the Earth and a book on the table.

The book has 3 main forces acting on it. The table gravitationally attracts the book but its negligible. There is the Earth pulling it down and the table pushing it up with an equal force that cancels out the Earth. If the book were made heavier, then the atoms in the table would be compressed further resulting in a greater repulsive force. Either way they cancel out.

(I posted this without seeing that the question had already been clearly and completely answered by Daniel Sank. I'll leave the post because there are a few links that might be helpful.)

F=-w where : f is the reaction in the upper direction w is the weight of the object

An object resting on a table in a gravity field of 1g is not at rest in an inertial system. Instead it is being accelerated upwards with an acceleration of 1g. The problem is that the surface of the table and the floor are NOT inertial systems and Newton's laws are valid in inertial systems only. The only near inertial systems that humans have access to these days are the International Space Station, the vomit comet and other free falling systems.

Not the answer you're looking for? Browse other questions tagged classical-mechanics forces statics or ask your own question.

0
*All* forces in stacked objects on ground

14
Why is a book on a table not an example of Newton's third law?
0
Why doesn't an object that collides with one that is at rest just do a 180?
2
Is the buoyant force on an object the reaction force?
0
Do contact forces cancel out?
1
Why is normal force sometimes called “reaction force”?
0
Conceptual Physics - Action Reaction Forces and Acceleration of an object on a uniform slope ramp
2
If a ball is kept on the table, then what forces are being exerted on it?