How is the speed in Hubble's law determined, if not from the Doppler shift?

What is the modern way of interpreting Hubble's law? I mean, if the galaxies have no proper motion? Then, is it still valid to use the Doppler effect ($v=zc$) to calculate a velocity? What does "velocity" in Hubble's law mean, and how is it related to the observed redshift?

Most of the information on the Internet seems to be self-contradicting and/or inaccurate.

The question details contain a misconception: "due to the expansion of the universe (and thus not related to the Doppler effect)".

Actually, whether or not a distant galaxy is receding from us because of expansion or some other reason, the Doppler shift will be the same.

(As a matter of fact, with the exception of spatial curvature and the cosmological constant, the Friedmann equations of an expanding universe can be derived purely from Newtonian physics; this is done, e.g., in Mukhanov's book, Physical Foundations of Cosmology).

And the determination of Hubble's constant is in principle the same as it has ever been: you take a set of objects (Cepheid variables, Type Ia supernovae, whatever) the absolute luminosity of which can be determined independent of their distance, compare it to their observed luminosity and obtain an estimate of their distance; and then measure the Doppler shift in their spectra and obtain an estimate of their line-of-sight velocity.

The fundamental relationship is between recessional velocity and distance.

In a uniformly expanding universe, it is easy to demonstrate that recessional velocity (as viewed from any point) is proportional to the instantaneous distance to another point.

The relationship with observed redshift is much more complicated and depends on the cosmological parameters that determine what happens to the universe between when the light was emitted and when it is received. You can find it as equation (1) in Davis & Lineweaver (2003); it depends on the matter density, dark energy density and the current Hubble parameter. Davis & Lineweaver perfomr some calculations and provide the plot below. At small distances, the approximation $v = cz$ works well, and it was actually a relationship between redshift and distance that was originally discovered and referred to as Hubble's law. 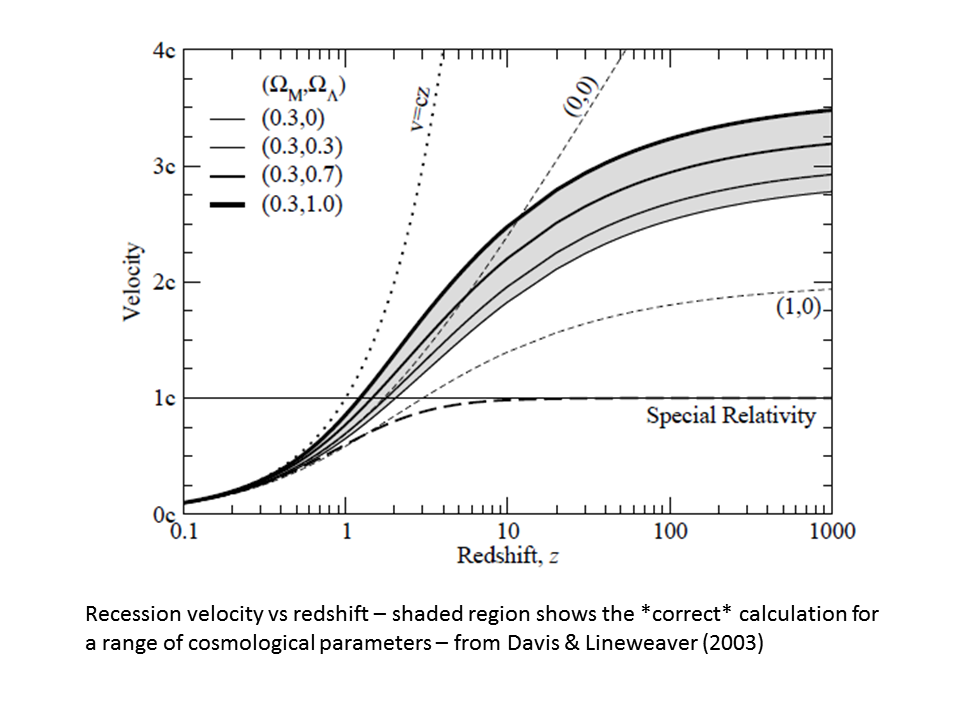 A modern day "Hubble's Law" plots distance (or apparent magnitude of a standard candle) against $cz$ and it is curved at high redshifts. Note though that $cz$ can and does exceed $c$ and this should not be directly interpreted as a velocity.

The same effect happens with light waves. If an object moves toward us, the light waves it gives off will be pushed together - the light's wavelength will be shorter, so the light will become bluer. If an object moves away from us, its light waves will be stretched out, and will become redder. The degree of "redshift" or "blueshift" is directly related to the object's speed in the direction we are looking.Using a car as an example. The speeds of cars are much too small for us to notice any redshift or blueshift. But galaxies are moving fast enough with respect to us that we can see a noticeable shift.

14
How Are Galaxies Receding Faster Than Light Visible To Observers?

2
Expanding universe and the peculiar velocity
6
Would cosmological redshift be present in the following situation?
5
Interpretation of cosmological redshift
1
Frequency shift for accelerating source due to equivalence principle? Do cosmologists consider it alongside the Doppler shift?
5
Redshift of distant galaxies: why not a doppler effect?
4
Time dilation due to space expansion
0
Can't we obtain observational values for scale factor at different periods in the history of the universe?
3
Proof for photon energy loss due to cosmological redshift
5
Local effects of cosmic expansion