Why is it so hard to make objects invisible in visible light?

We can make objects invisible in the realm of radio and infrared wavelength. We can, for example, hide a plane radar and heat signature from being detected. However, it seem, even after years of research, very challenging to mask the "visible light signature" of an object. It would be the coolest thing to make stuff invisible to human eyes, but we still can't do it yet. Why is it so hard to do so?

The interaction of light and matter is a very complicated subject, but in a nutshell, if a material can transition between states A and B (whether those states are nuclear, atomic, molecular, or...phononic?) and the difference in energy $\Delta E_{AB} = E_B - E_A$ between those two states is close to the energy of incoming photons ($E_\gamma \approx \Delta E_{AB}$), then the photon will typically be absorbed. Or sometimes if $E_\gamma \approx \Delta E_{AB} / 2$. Like I said, it's complicated. If the energy of the photon is not close to the energy of some transition in the material, the photon will pass right through. Unless it scatters, which is another thing that can happen without a corresponding transition. Again, complicated.

Here's an example transmission spectrum I found for Makrolon Polycarbonate, a type of strong, transparent plastic used for things like windows.

As you can see, throughout the visible (and part of the infrared) spectrum, the material is nearly transparent - it only absorbs or scatters 10% of the light. However, there are small dips in the transmission spectrum (and a big dip at 1650 nm). These dips probably correspond to some atomic or molecular transition that occurs in the material that causes light to be absorbed.

For further reading, there's a nice introduction to this subject on hyperphysics.

The current method of making an object invisible involves the electromagnetic waves passing around the object and coming together on the other side. This requires that the object and waves be of a certain size. So, because microwaves are large we can make an ordinary household object invisible to microwaves. However, visible light has a very tiny wavelength on the order of micrometers. This means that we are limited to making things around that size invisible to the visible spectrum. 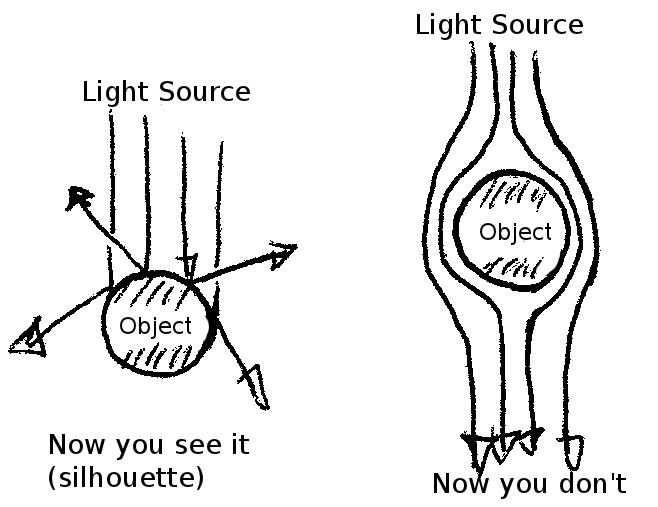 Radio waves are large. Even the IR which is the bleeding edge of the meta material techniques is larger than visible light. Making a meta-material to taylor the electric and magnetic properties to render it invisible, we make it out of atoms. 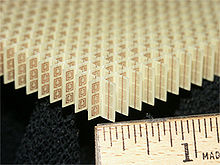 If the wavelength of light gets down to the size of an atom, how can you build little magnets and rings? You see the bulk iron in the normal way, as you can't make a coil small enough.

Furthermore, the index of refraction varies with the wavelength. That's true in general for normal material, and why we need fancy lenses that combine different combinations of properies to approximately handle different frequencies for one special case of focusing at one point from one distance. So if we did have a metamaterial that worked for blue, we would still see the red "messed up". A rigid lens system like a camera lens (but with negative dispursion) if such materials existed would need a compound lens of solutions differing in details to treat red, blue, and enough points in between; approximatly "in focus" for one focal length. We can do better than that now using mirrors and (normal) lenses. 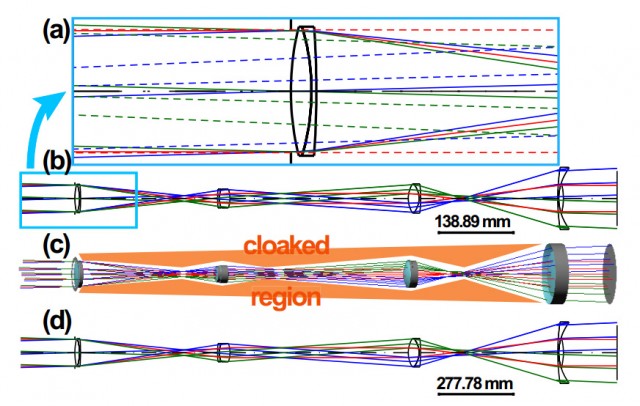 Then again, using electron density waves rather than little rings and coils gets past the atom-scale issue.

There is a difference between what invisibility means:

Radar invisibility: Radio detector is not receiving any signal that is bounced back by the vehicle. The signal is created by the radar. Radar usually do not record signals generated by other sources. So usually it is enough to absorb the wave or bounce it in different direction.

Visible light invisibility: Eyes receive electomagnetic wave from behind the vehicle. The light is created by the sun. Object have to be able to recreate wave from behind which is far more complicated.

Not the answer you're looking for? Browse other questions tagged electromagnetism optics or ask your own question.

8
Why is visible light used in Optical fibers (instead of other EM waves)?
2
Visible light and colors
19
"Reality" of EM waves vs. wavefunction of individual photons - why not treat the wave function as equally "Real"?
1
Could laser speckle patterns be used in diagnosing vision defects?
29
Why is UV light visible when reflected off paper?
1
Why are transparent objects visible?
1
If light could bend around a person ,would that make the person invisible?
1
Can visible light be composed of invisible electromagnetic frequencies?