Maximum reading after dropping a mass onto a scale

If one drops an object onto a scale, the needle will temporarily spike to a high reading.

Given a mass $m$ dropped from a height $h$ above a spring scale, is there a good way to approximate what the maximum reading will be?

There was a discussion about using an energy-based approach in this thread, but I think said approach depends on idealistic assumptions (e.g., that the collision between the falling mass and the scale is elastic). The general line of reasoning is as follows:

The base case involves placing $m$ gently on the scale:

Neglecting friction, energy conservation suggests that the maximum displacement should be $x_0 = \frac{2mg}{k}$. If the scale is calibrated properly—meaning it reads $m$ at its new equilibrium position—it should read $R_0 = 2m$ when the mass is at the bottom point of its oscillation.

Using energy conservation again, except with $m$ at an initial height $h$ above the scale: 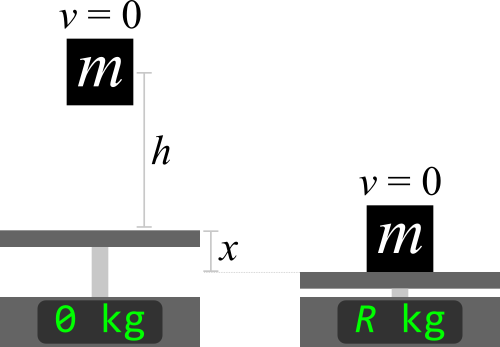 This result initially seems plausible, but after plugging in values, the results are wild. I know that any model based only on elementary concepts will likely depend on tenuous assumptions, but I'm wondering if there is a better approach I am overlooking.

Edit—9/7: I don't have much reputation and would like to bump this thread before offering a bounty, so here's another thought.

There is a fun exercise in which a vertical chain with mass is hung with its bottom touching the top of a scale. The problem is to find the scale's reading when a given portion of the chain has dropped onto the scale; one solution uses the impulse-momentum theorem to determine the force exerted by the scale on the mass. A momentum-based approach like this seems to depend on fewer assumptions, but I'm pretty sure it cannot be applied to a falling point mass.

There is the instantaneous force between the mass and the scales, and then there's the reading of the scales. Factors influencing both of these depend on many unknown factors - so here are just some general thoughts.

The time that it takes to accelerate the mass is given by the elasticity of the contact, and is not in general known. The shorter the time, the larger the force - with the average force given by

if we consider the time-averaged force.

This force, however, probably doesn't register on your scales. I can think of three "main" kinds of scales: the balance, the spring scale, and the "return to zero" scale. None of them would register the initial impact force.

For a balance, the mass of the object is determined by comparing it to a reference mass on the other arm; that's not what you are looking for here.

For a spring scale, the deflection of a spring under the load is a measure of the weight: this is the one that is most amenable to analysis here.

For a "return to zero" scale (I can't think of the proper name - comments, anyone?) the mechanism used generates a current in an electromagnet to restore the scale to the same position it was before the mass was added. These typically have a slow response but are the most accurate - since the force is exactly proportional to the current when the scale is in the same position, there are no effects of spring ageing, temperature etc.

I believe your question can only reasonably be answered for the spring scale. Note that such scales are typically "critically damped" (although that is only approximately true since the degree of damping depends on the mass - so it can only be critically damped for one mass). But let's initially leave that out.

If we have an object with mass $M$ dropping from height $h$ onto a spring loaded scale with mass $m<<M$ and spring constant $k$, the deflection $d$ can be calculated from conservation of energy.

This must be equal to the elastic energy stored at the maximum deflection:

We can rearrange and solve for $d$:

The two roots correspond to the extrema of the (simple harmonic) motion that the mass would execute: for your question, we need the positive root. Note that if $h=0$ the above shows that the maximum deflection of the scale will be twice the distance expected,

This is of course where the damping will come into play: a heavily damped scale will dissipate all the oscillatory energy, and will slowly reach the equilibrium value without ever overshooting. An underdamped scale will oscillate - in the limit of very light damping, it will read the value calculated above. But a critically damped scale will overshoot just once, and we can compute the amount of overshoot.

We find A and B from the initial conditions,

If we put $x(0) = d = \frac{Mg}{k}$, the overshoot will be given by the initial velocity which we calculated above. For a light scale, this initial velocity is the velocity $v$ of the mass after falling height $h$ (I am going to ignore the additional height $d$ which I will assume to be small; otherwise the equations get a lot messier...) and the equation of motion becomes

(The minus sign is there because the velocity is towards the equilibrium position). Taking the derivative with respect to $t$ we can compute the time when the overshoot is maximum and plug that back in to obtain the overshoot:

For sufficiently large $v (v>\omega_0 d)$, this will result in an extreme (overshoot).

Substituting $t$ back into the expression for $x$ will give the size of the overshoot, from which the mass registered on the balance follows.

You may be able to then analyze this to find reasonable answers to your questions about the maximum readings after dropping a mass onto the scale.

Not the answer you're looking for? Browse other questions tagged homework-and-exercises energy-conservation spring scales or ask your own question.

2
Dropping a weight onto a spring scale