Why isn't momentum conserved in this pulley problem?

I have some conceptual doubt about method of solving this problem.

24. A block of mass $m$ and a pan of equal mass are connected by a string going over a smooth light pulley as shown in figure (9-W17). Initially the system is at rest when a particle of mass $m$ falls on the pan and sticks to it. If the particle strikes the pan with a speed $v$ find the speed with which the system moves just after the collision. 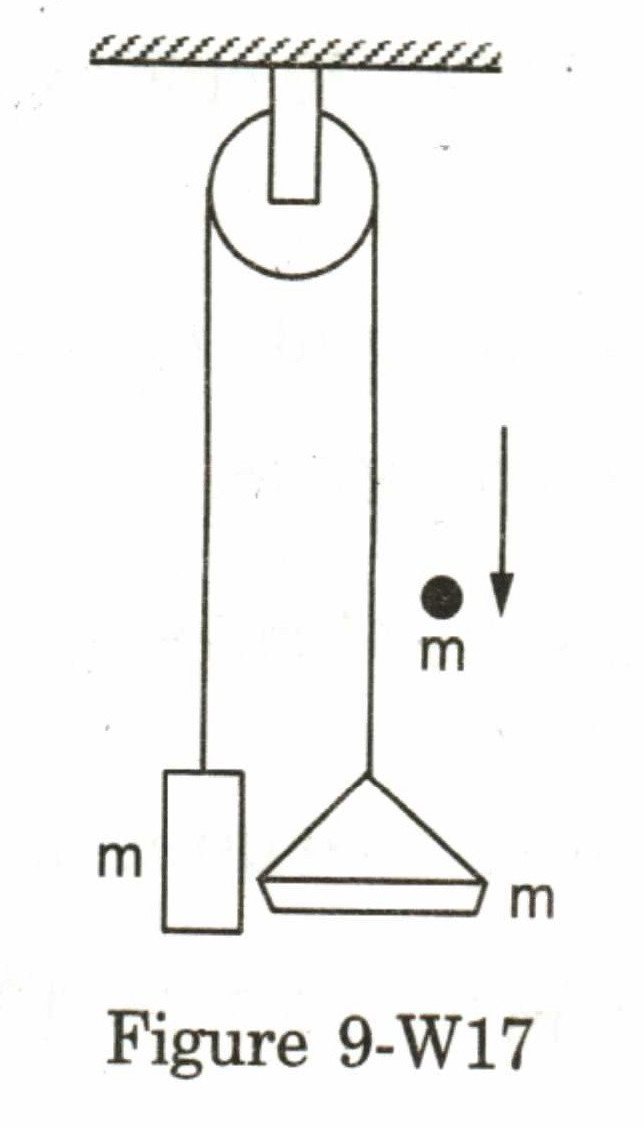 As there is a sudden change in the speed of the block, the tension must change by a large amount during the collision.

But, total initial momentum of the system = $mv$ downwards.

The pulley (and the attachment to the ceiling) are part of the system here. Because of this, you cannot simply use conservation of momentum on the three given masses.

If the final velocity were $v$, then the total energy of the system would have increased since both the pan and counterweight would be moving and the other mass would not have slowed.

You can't use conservation of momentum equations on only a portion of a system. If you imagine a ball bouncing on the floor, you can't say the momentum of the ball is conserved before and after the bounce. You have to consider the change in momentum of the floor as well.

In your problem, the change in momentum of the ceiling will be small, but relevant.

As you do not know the change in this final component, you can't use conservation to solve for the remaining momentum of the other three masses.

Let's change the situation to make this more explicit. Instead of a counterweight, consider two pans and two weights. 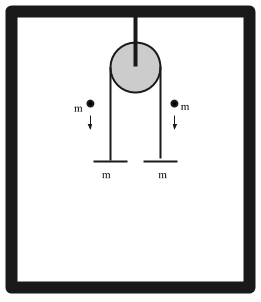 Let's imagine the pulley and string to be massless, so the two pans and two weights have a total mass of $4m$. If the balls have a velocity $v$, then the total momentum of the pulley inside the room is $1mv + 1mv = 2mv$.

But by symmetry, we can see that the pulley isn't going to turn. If we imagine the pans at rest after the collision, we find the momentum is now $0mv$.

If the pulley's connection to the ceiling/room/earth is not part of the system, then we say that forces from that connection were external and changed the total momentum. We cannot use conservation of momentum due to external forces.

If the ceiling/room/earth are part of the system, then after the collision, they have gained $2mv$ downward momentum, so the total system does not change. If we picture the box as nearly massless and in a spaceship instead of earth, the entire box would be moving downward at $v/2$ after the balls hit the pans. (assuming completely inelastic collision). The more massive the box, the slower it moves to retain the velocity. Consider it attached to a building/earth, and the momentum still changes, but the velocity change is no longer measurable.

The ceiling is applying a total upwards force on the pulley of magnitude $2T$, in order to counteract the force of equal magnitude applied by the masses. So the net force on the system (consisting of three masses and the massless pulley and string) is not zero. Since $\int {Tdt} = mV = mv/3$, $\int 2Tdt = {2 \over 3} mv$ which is the amount of momentum lost.

There is a transient tension $\Delta T$ in the string that will give rise to a change in momentum of the counterweight, the pan, and the mass on the pan. At the ceiling, the pulley transfers twice this force to the support: 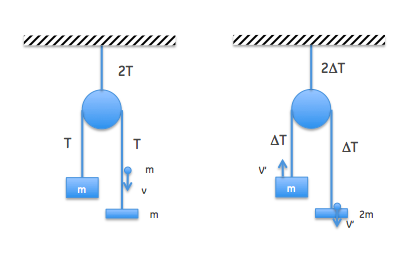 The change in momentum of the three components is (with + direction up):

This change in momentum is provided by the reaction $2\Delta T \delta t$ at the pulley / ceiling:

And for the entire system

Which is consistent with the earlier determination that

Note that if your two components in the system were in a straight line (straight string, no pulley), the sign of the momentum change for the counterweight would be reversed and there would be no mystery.

Let I be the impulse transferred to the string due to the fall of the ball on the plank. Now as gravity is a non stop impulsive force so for calculation purpose it could be neglected. And the impulse would be transferred on the other side of the string as well.

1
Conservation of Momentum for Pulley System
1
How impulse momentum theorem is put to use?