I am having trouble understanding the kinds of virtual displacements which are permitted for a given constrained system. I have a specific example in mind:

A block of wood resting on a table parallel to the ground.

And if we do so, the condition that the constraint forces doing no work would be violated.

UPDATE: Uldreth has pointed out the error in my reasoning by pointing out that the force of constraint would be zero as the block leaves the surface. The original question has been answered, and now I have a follow-up question:

What is the reason that the virtual displacements wouldn't include any displacement where the block leaves the table's surface?

Of course this is an idealization (even if we don't account for the block leaving upwards, it could break the table).

A follow-up question: I understand that the constraint force of the table always does zero work, but what about the applied force of gravity? If we move off the surface, the force of gravity does non-zero work on the block. Thus, despite all the forces being balanced, non-zero work will be done on the object if the virtual displacements are anything off the table. This is in contradiction to D'Alembert's principle.

This says nothing against nonconstrait forces. If, instead of a table parallel with the ground, you take an incline with angle of inclination $\varphi$ with the ground, then the downward pointing gravitational force, $\mathbf{F}_G$, will admit decomposition to normal and tangential parts. The normal parts will be cancelled by the constrait force, but the tangential part will not be cancelled, and the object will accelerate on the constrait surface. However in this case, the constrait force will be orthogonal to the trajectory, so it still does no work. But the force of gravity does work.

Since you seem to struggle with the concept (which is absolutely no problem, this is a quite abstract concept!), let me illustrate this whole principle of virtual work by several examples.

Here is an ultra crappy gimp drawing I made in 2 mins: 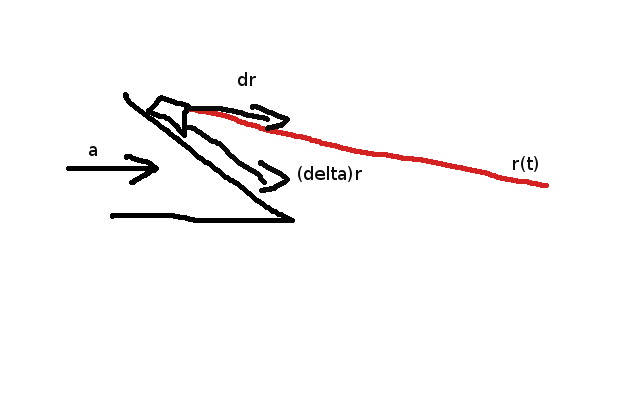 Also, the principle of virtual work does not say that the constrait forces cannot do work for virtual displacements, but that they cannot do positive work. If you use a nongeometrical constrait, for example a stationary incline with friction added, then friction is also a constrait, however it is velocity-dependent. In this case the normal force and the friction together will point backwards, and will impede the acceleration of the object down the incline. Since the incline is stationary, all displacements are virtual, yet the constrait force will do negative work on the object. This is fine, as they only cannot do positive work.

Not the answer you're looking for? Browse other questions tagged classical-mechanics lagrangian-formalism constrained-dynamics or ask your own question.