Suppose from a height $H$, I throw a ball of mass $M$ and radius $R$ with initial velocity $u$ into a pool of depth $x$ having a liquid with density $\rho$ and coefficient of viscosity $\eta$.

Upto what height will the Water Splash? 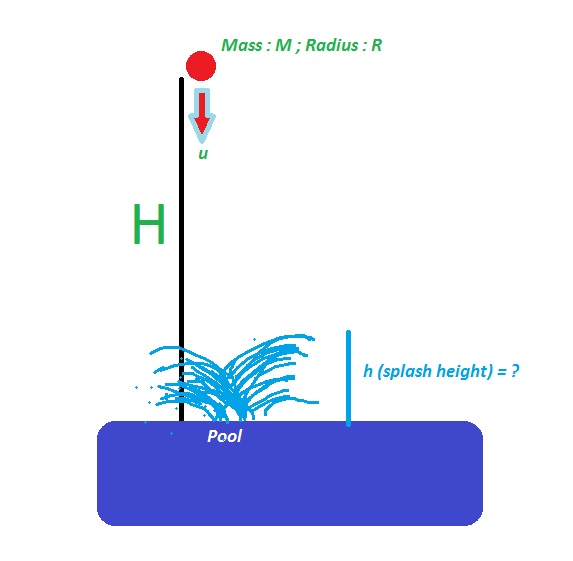 This may be a silly question! (Source : my brain)

Assume every condition to be identical with no air resistance.

Feel free to assume any other parameters if needed.

P.S. $\rightarrow$ I've see similar questions but some of them want an exact answer and some are not so direct while some are incomplete questions...

Small Note : We do not have to consider the highest 'single' drop... Just assuming almost every water droplet jumped upto a height $h$. Ideal conditions...

Feel free to assume the liquid as WATER if required!

This above gives a following basis;

Kinetic energy of the ball is also it's potential energy (no friction on fall) Ekin = m g H This is then transferred to pressure through the ball surface; A = 4 pi r^2

This pressure then splashes the fluid up; 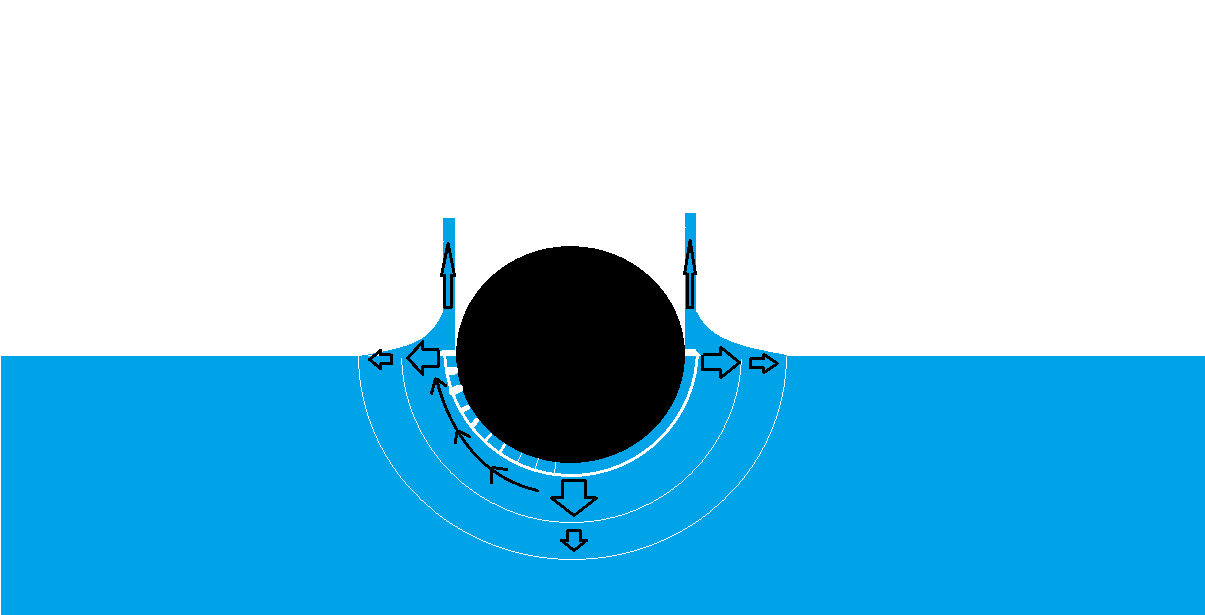 In optimal case the diameter of the ball is almost zero, and viscosity of the fluid is such, that the ball would stop in a distance of slightly more than r. This would lead to a situation where the vertical velocity of the water is very low, and thus the water would jump almost directly upwards. This doesn't actually matter too much, if the air friction is not considered. 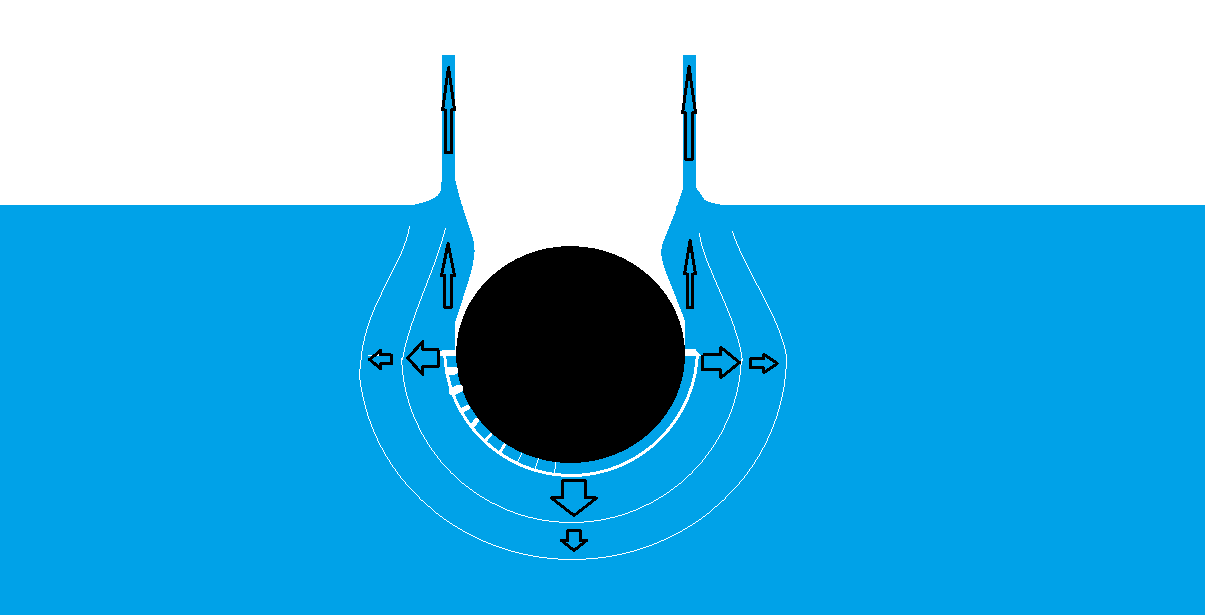 This all could be calculated. But the interesting thing is that there is a hole in the water when it goes deeper; And this means that the fluid which has maximum pressure has now a surface with no pressure. And therefore the fluid goes with even higher velocity back to fill this hole; as the velocity come from pressure difference, what happens; 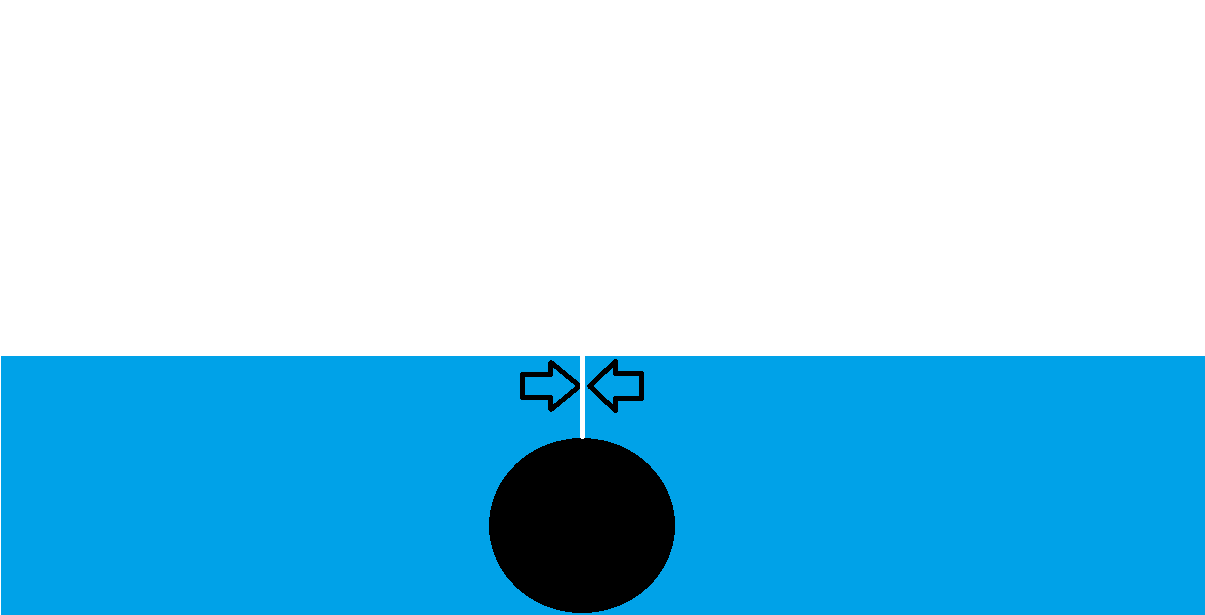 It collides in the middle of the hole, but this time there is many velocities reaching the same point at the same time. Again all these velocities are transferred to pressure and the fluid takes new direction. 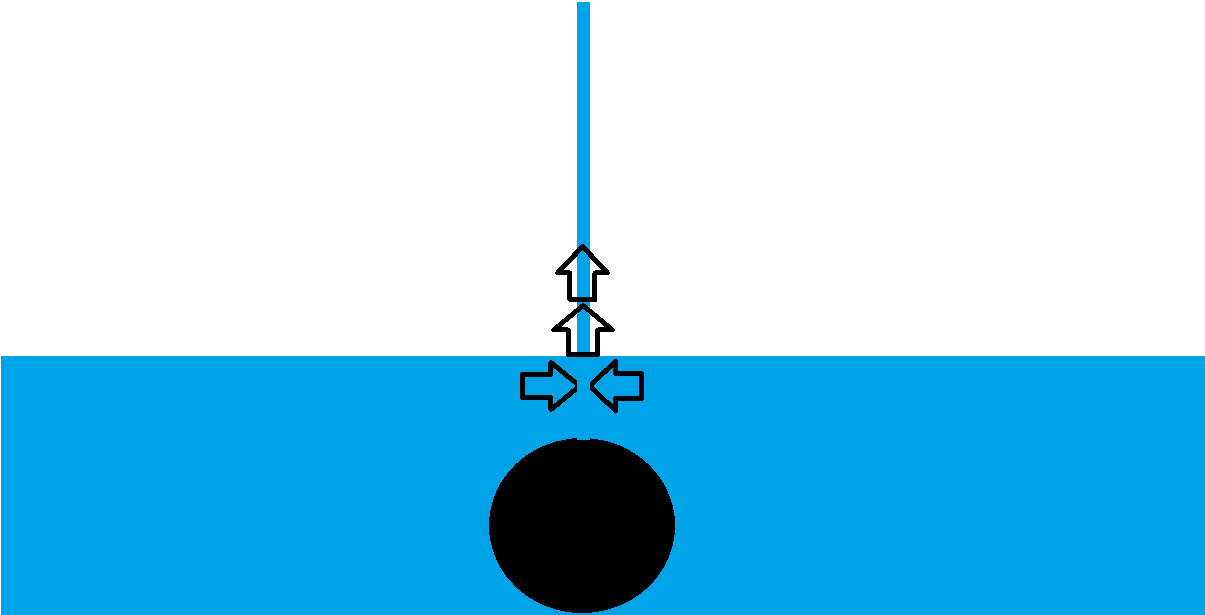 In 2-dimensional world this new velocity component would be 2-times the original. In 3-D reality it's more, and in true reality it's limited by viscous losses, surface tensions, etc. etc.

So to conclude this all; The splash hight can be anything.

At this video found from comments, there is a golf-ball used to do the splash. And such a Golf ball makes a higher middle-splash than a round ball, because the boundary layer of the ball makes less losses, but also disturbs the fluid less. And therefore the returning middle splash is so big in this video; the collision happens with minimal disturbances; and the velocity vectors really hits against each others.

Indeed, this seems to be very complicated problem.

But let's throw away all this complexity and concentrate in the core of the phenomenon.

So consider an ordinary stone with volume $V$ that falls into the water from a height of $H_{0}$. The shape of the stone may be arbitrary. Ignore air resistance.

So $v$ above is velocity with which water (with volume of $V$) bursts up. To what height of $H$ ?

Not the answer you're looking for? Browse other questions tagged newtonian-mechanics fluid-dynamics everyday-life viscosity or ask your own question.

4
I was wondering if the mass of an object can be measured by the effect it has on a body of water if it was dropped from a certain height?
4
How much water can an object raise after its fall?
3
At what height should I drop my kids from to prevent getting splashed?
2
What is the relation between a object and the height of the water splash?
19
Deriving equation for skipping stones over water
13
Crown shape in water waves?
6
meteorite-like impact of a drop of yogurt
2
How does a ball cause a splash? (With the relevant math)
1
Sources for Splash height of a ball
0
Horizontal splash distance of water
See more linked questions

1
A water drop in a falling lift
12
Explanation of the waves on the water planet in the movie Interstellar?
1
Jumping into a Pool While Wearing a Superhydrophobic Diving Suit.....What Happens?
4
Equation of the funnel's surface of a forced whirlpool in a cylinder