Consider a basic RCL-Circuit consisting of an ideal resistor, an ideal capacitor and an ideal inductor in series. 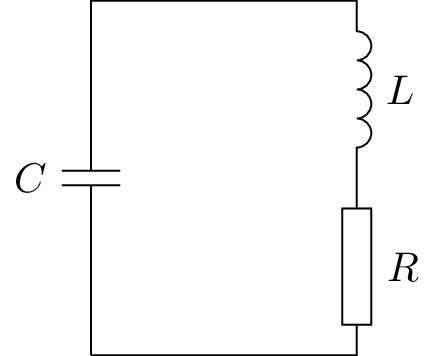 Assume that at time $t = 0$ the current is zero and the capacitor is charged with a charge $Q$.

Especially the electric field is interesting since it seems to be neglected most of the time. For the answer of the analogous question for more simple circuits see:

Edit 2: The usual high school presentation where only the magnetic field in the solenoid is considered (but no electric field) is clear on that level but incomplete. And especially the case of the electric field seems to be complicated.

I did some research and found papers about electric fields in solenoids but I don't get the information together to a complete picture. So a numerical simulation would be great which includes all relevant details. Here are the papers I found, perhaps this is helpful to write a good answer for someone who understands the papers better than I do:

And of course the references in the cited papers.

At least I am looking for a qualitative account, which makes the direction of the fields clear. Consider for example Feynman lectures II picture 22-9. Feynman concludes with indirect arguments something about the line integrals $V_i$. However I want to get a direct picture of how the electric fields really are.

In the body of the question, you mentioned the limit of R approaching 0. Let's begin from there. In this case we have what is called an L-C Oscillating Circuit. 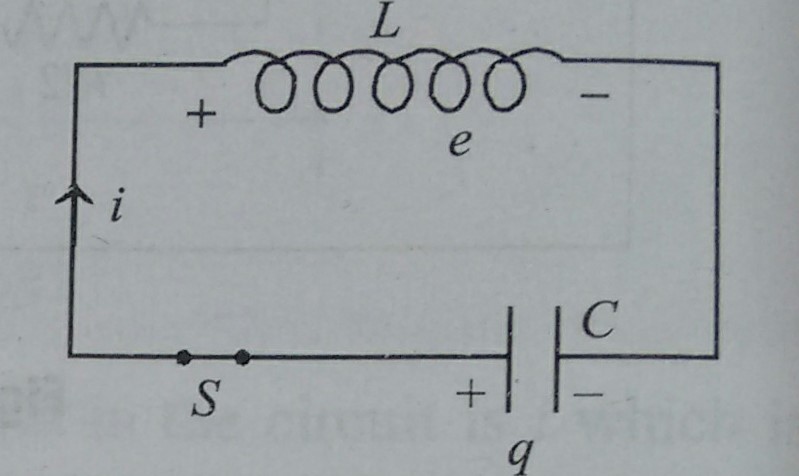 Clearly, at any time $t$, current in the conductor is: $$i = - \frac{dq}{dt} $$The negative sign appears as the charge on the capacitor is decreasing with time, but current is positive. Induced emf $e$ in the inductor is given by $e=L\frac{di}{dt}$ (click here for explanation).

Applying Kirchhoff's law across the circuit, we find that $L \frac{di}{dt} = \frac{q}{c}$. This is a differential equation whose solution is $i=i_0 sin(\omega t + \phi)$ where $\omega = \frac{1}{\sqrt{LC}} $; $i_0$ and $\phi$ are constants. Note that this equation and the differential equation $L \frac{di}{dt} = \frac{q}{c}$, resemble the equation for simple harmonic oscillation, q taking the place of displacement, i instead of velocity, and $\frac{di}{dt}$ for acceleration.

The circuit does indeed oscillate, with the extreme position being the capacitor charged upto Q, but with opposite polarity.

Note that the direction of i, E, and B changes after a time, before returning to the original state. The period of this oscillation is $T=2\pi\sqrt{LC}$. The charge on the capacitor, current through the circuit both vary as sine functons. As for the various fields, The Electric field inside the conductor is 0, since we are assuming that the conductor is ideal. So, the electric fields around the conductor are radial and constant. There is a magnetic field due to current flowing through the inductor and the conductor. The field due to the conductor current is concentric and coaxial with the wire(assuming the wire is straight), with strength of $B=\frac{\mu_0 i}{4\pi r}(\sin\theta_1 + \sin\theta_2)$ where the angles are those the length of the wire subtend. This value varies sinusoidally, at a given point in space. As is shown in the gif, the direction of magnetic field in the interior of the inductor depends on the direction of current flowing through it. The Magnetic Field inside the inductor is given as $$B = \mu_0 n i=\mu_0i_0 \sin(\omega t) n$$ where n is number density of the coils. Similarly Electric Field between the plates of the capacitor will be $$ E=\frac{q}{A\epsilon_0} = \frac{Q \cos \omega t}{A\epsilon_0}$$ where A is the plate area of capcitor.

Adding a resistor to this setup is like providing friction to a simple harmonic oscillator. It serves only to dampen the oscillations. In short, After each oscillation, Charge on the capacitor will have been reduced. Also, a component of the Electric Field develops inside the resistor along the direction of current. It's magnitude is $E=\frac{J}{\sigma}$ where J is the current density in the resistor, and $\sigma$ the resistivity.

In such a case, a final steady state will be observed, where current and charge everywhere is 0. The differential equation becomes $$L\frac{d^2q}{dt^2} + R\frac{dq}{dt} + \frac{q}{C} = 0$$ You can find the solution for such an equation here

If your source term is the charged capacitor, I am imagining a switch in the system that you close at t=0, then you can find the current in the system.

Of course you care about the current in the system:

And while the concerns above are valid I think the simplification that this is a parallel plate capacitor with a pseudo 2D circuit is a fine place to start.

I think Hadrian Evan's animation is good, +1. But there's an issue: the field is the electromagnetic field. The electric field and the magnetic field are "are better thought of as two parts of a greater whole". You mentioned Jefimenko, see this quote: "...neither Maxwell's equations nor their solutions indicate an existence of causal links between electric and magnetic fields. Therefore, we must conclude that an electromagnetic field is a dual entity always having an electric and a magnetic component simultaneously created by their common sources: time-variable electric charges and currents."

I want to know them as vector fields in the conductors and in open region around the entire circuit. An analytic expression would be great, but some plots would suffice.

They aren't two distinct fields. See this from Minkowski: "In the description of the field caused by the electron itself, then it will appear that the division of the field into electric and magnetic forces is a relative one with respect to the time-axis assumed; the two forces considered together can most vividly be described by a certain analogy to the force-screw in mechanics; the analogy is, however, imperfect". Also see this from Maxwell: "a motion of translation along an axis cannot produce a rotation about that axis unless it meets with some special mechanism, like that of a screw".

The changing magnetic is the electric field, and vice-versa. To appreciate that imagine you move past an electron. You don't create a magnetic field for that electron because you moved. In similar vein get rid of the capacitor and the inductor, and you've only got a wire. Move some electrons down it and you observe a concentric magnetic field around the wire. But you didn't really create a whole new field. You merely created a mismatch between the electromagnetic fields of the metal ions and the electrons. Then if you twist your wire into a spiral you've reconfigured the concentric field and you've got your inductor. It works a bit like a flywheel actually, see this article.

Especially the electric field is interesting since it seems to be neglected most of the time.

I did some research and found papers about electric fields in solenoids but I don't get the information together to a complete picture.

You only get the complete picture from the electromagnetic field. And like Maxwell and Minskowski said, it has this screw nature. Which is why we have electric motors. Shove the current along the wire, and the motor turns. It's a bit like a pump-action screwdriver. We also have generators where you turn the rotor to push current along the wire. That's a bit like an ordinary screwdriver. We don't have a right hand rule for nothing.

I am looking for a qualitative account, which makes the direction of the fields clear. Consider for example Feynman lectures II picture 22-9.

However I want to get a direct picture of how the electric fields really are.

Not the answer you're looking for? Browse other questions tagged electromagnetism electric-circuits or ask your own question.

15
Does a current carrying wire produce electric field outside?

10
Understanding radiation and coupling of LC circuits
1
Circuit elements classification
38
Does alternating current (AC) require a complete circuit?
12
How can KVL & KCL be derived from Maxwell equations?
8
How do electrons actually move in a circuit?
4
Application of Kirchhoff's laws in circuits with inductors
3
A working “mechanical” model that explains current in a wire/circuit?
1
Equivalent DC circuit with charged conductors
0
How to derive and write Kirchoff loop law for circuits including capacitors?